This Eighties-inspired outsider story transports us to a world of schoolyard politics, crushes, faux pas and geeky dancing.
Chrysoula Aiello 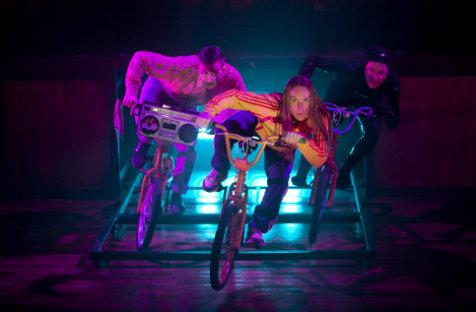 Currently within the Sydney Theatre Company beats a blue light disco heart, palpitating with a mix of excitement, magic, horror and awkwardness that is all too familiar. A sell-out when it premiered at the Adelaide Festival last year, Rosemary Myers’ comedy School Dance transports us to a place of schoolyard politics, crushes, faux pas and lots of dancing, with an Eighties-inspired aesthetic to work up our nostalgia-o-meter.

This is a typical high school outsider story. Three teen boys – Jonathon (Jonathon Oxland), Luke (Luke Smiles) and Matt (Matthew Whittet) – all outcasts of different ilks, are waiting to enter their school dance. As they converse, along with narrational aid from an artful voiceover (think Amelie in style) to fill in extra details, we become privy to the fears, anxieties, fantasies and domestic situations that shape their identities.

Matt, an alpha geek of sorts with all the stereotypical trappings – thin, small statured, wears glasses – suddenly turns invisible. This contrivance catapults the narrative action into a heroic adventure vehicle with moral lesson attached – like the kind found in the Care Bears canon, but without its saccharine sheen.

The overall story arc is not groundbreaking. Predictability may annoy some but should appeal to the majority’s comfort zone.

All the bold aesthetic hallmarks of the 1980s are present, as are the genre seasonings of fantasy, cartoons, action and nods to John Hughes’ oeuvre. Inserted in this mash-up, among the decade’s calling cards, are ‘anachronistic’ references and tonalities, derived from what’s gone in between then and now, pop-culture wise, providing the production’s original and quirky edge. The result is a fun, kitsch sensibility informing the piece that’s ironic, self-reflexive and celebratory in nature.

School Dance’s ingredients have clearly been inspired by the creative team’s own experiences of teen outsiderdom. Interestingly, the male leads each have an extra discipline up their sleeve, taking on the roles of writing (Whittet), design (Oxlade) and composer (Smiles), their double creative investment no doubt influencing the effectiveness of the oddball gel that binds School Dance together.

The design palette of the school hall and its bubble clusters of blue, red, yellow and white in balloon form are aptly reminiscent of Rainbow Brite. Dramatic neon lighting, foley, 80s hits and newly inspired music herald rapid scene changes and plot development with a sophisticated filmic vibe. The set is also cleverly employed – alternating between the storeys of dance floor, stage, and offside doors and windows – to accommodate multiple scenes, with varied narrative dimensions, and often speedy transitions.

Costume design is also spot-on with tracksuits, acid-wash jeans and leg-warmers all in the mix, not to mention the black unitard with multicoloured shimmers that ironically indicate invisibility. Nankivell does a superb job with the choreography of the bicycle scene, which complements its visual audacity. And every dance scene has a store of wonderfully executed geeky moves, such as the running man, to delight the audience.

Smiles plays the goofy, slightly puerile and tougher-than-the-rest character convincingly enough. Whittet and Oxlade, the acute social commentator, also succeed. Their onstage chemistry as a trio seems to benefit from their having worked together in previous productions.

Amber McMahon is the standout performer in this piece, displaying chameleon-like versatility shifting through various female stereotypes with ease and bringing electric vitality and movement to her roles.

There were parts where the tempo of the action flagged a little or was too quick. Also, there is the danger that School Dance will appeal to a restricted window of a few generations, though laughs seemed to be abundant nevertheless.

Whittet says of the creative team: ‘we’re all odd fish in our own special way. But then again, who isn’t’. At the heart of School Dance, with its eclectic design and mash-up of cultural currencies, is a parable about outcasts embracing their inner-awkwardness and realising they are just as awesome – if not more awesome – as the awe-inspiring beautiful elite.

Chrysoula Aiello is a Sydney-based editor, freelance writer and reviewer.