Five performers offered distinctive, poignant takes on womanhood on a cosy winter night.
Ellen Muller
[This is archived content and may not display in the originally intended format.] 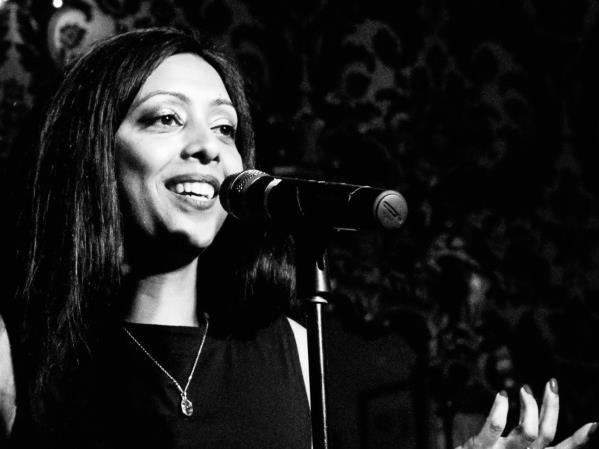 Poetpre was born in India, lived in Singapore, then moved to Melbourne and calls it home. Photo courtesy of Melbourne Spoken Word and Poetry Festival.

‘Passionate, powerful, vulnerable, honest’ – for six years, Mother Tongue’s monthly spoken word showcase has been a platform championing female and non-binary voices who embody these values. It is Melbourne’s largest women’s spoken word event, and while their nights will ordinarily consist of one emerging and one established performing artist, this month saw Mother Tongue present Women of Fire as part of the Melbourne Spoken Word and Poetry Festival (MSWPF), and extend to feature five performers: Amy Bodossian, Poetpre, Stephanie Dogfoot, Dai Moret and Tanya George. Hosted inside Second Story Studio’s warm Engine Room, it was the chance to drink homemade chai and listen to acclaimed names in the spoken word scene.

The evening commenced with one of Mother Tongue’s regular hosts, Brigid Moran, sharing a short piece challenging the classic axiom, ‘boys will be boys’. Moran’s words, as a mother of a young son feeling an immense responsibility to raise a better generation of men, were a strong and thoughtful prelude that filled one with optimism for a kinder future but equally invited personal reflection as to what one’s own influence is in sculpting the next generation.

The first feature performer was Poetpre, whose five pieces were poignant and impassioned personal perspectives, covering themes such as loneliness, mental health, family dynamics, gender expectations and experiences of race growing up in Australia. Poetpre told the audience that her parents were there watching her perform for the first time, which added another layer of bravery to her already raw work. Each of Poetpre’s pieces evoked audible appreciation but her final piece, ‘Good Girl’ – which articulated the heartbreaking ramifications of teaching girls to not be ‘difficult’ or ‘make anyone uncomfortable’ – left all in a shocked quiet before erupting into applause.

Following Poetpre, poet and cabaret performer Amy Bodossian at first seemed to shift away from a more sombre mood. Beginning with hilariously awkward – and sadly relatable – stories of heartache and sexual encounters, Bodossian gradually revealed more and more snippets of vulnerability and was able to perfectly capture the beautiful agony of being hopelessly hung-up on an old flame. Her final piece was a monologue detailing each flickering thought as she attends her first psychiatric appointment for her obsessive compulsive disorder, reaching a balance of humour, fragility and hopefulness.

Brazilian and Sydney-based poet, Dai Moret, came next. The mother of a four-year-old son, many of her pieces centred on the complexities of motherhood – a theme found even within her powerful final piece on the infamous Brazilian homicide of black councilwoman, Marielle Franco. Although Moret’s pieces were each distinctive, they felt connected in form and rhythm, tracing histories of her and her son’s bond, then of women’s oppression and finally 500 years of Brazilian’s broken class system which Franco would inherit when she was ‘born and raised in the trenches’. Although this was Moret’s first Mother Tongue event, her soulful ruminations on motherhood and the power of unified women encapsulated the series’ objective.

International poet Stephanie Dogfoot followed Moret, and her sharp-witted perspective on life and its little moments sparked laughter and revived energy in the room as we got later into the evening. Her effortlessly charming delivery brought the audience with her through her experiences growing up in the city, her adolescence in an all-girls college in Singapore, and later travelling and contemplating what type of parent she hopes to be. Her piece ‘Maybe all we wanted was somebody who cared’ perfectly captured all the complexities and awkwardness of growing up queer and coming to terms with what that means.

Concluding with vocalist Tanya George’s unique electro-soul sound achieved through her mixture of looping pedals and rap, it was a cosy and ambient end to the night as the crowd lay on bean bags and let themselves be carried away by the nuanced composition. Mother Tongue’s handpicked line-up achieved a clear intimacy with the room and proved to be a strong array of voices to offer diverging and meaningful experiences of womanhood.