A stellar production of this demanding, thought-provoking play that confronts issues which are still extremely relevant today.
Lynne Lancaster
[This is archived content and may not display in the originally intended format.] 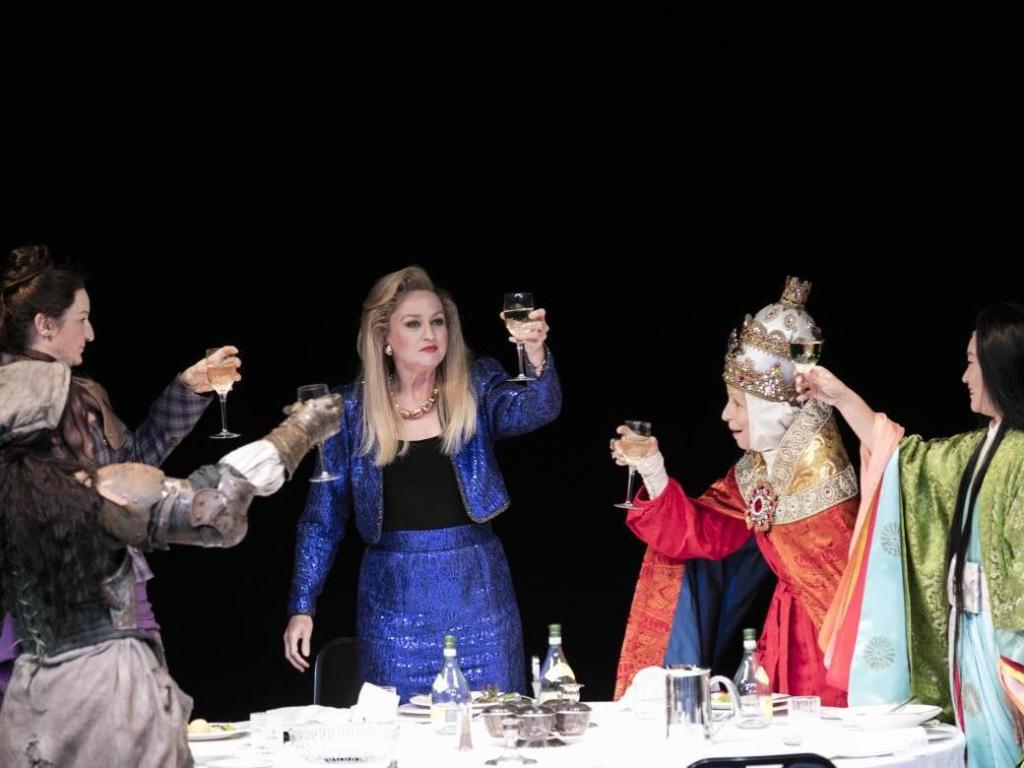 First performed in 1982, Caryl Churchill’s play, now regarded as a modern classic, is still as vibrant and powerful as if it were written yesterday. The issues raised are still extremely relevant: the personal vs political – a woman having to choose between a family and children and a career. It’s also an angry vent at the Thatcherism of the period.

Directed by Imara Savage Top Girls is quite complicated in plot and structure with its time shifts and jumps, but basically the major set piece is an act one dinner party at a posh restaurant to celebrate Marlene’s (Helen Thomson) promotion. There are magnificent performances from the entire ensemble – almost all play two or three various characters. In the next two acts we meet Marlene’s sister Joyce (Kate Box) and niece Angie (Contessa Treffone).

Marlene heads a recruitment agency, Top Girl. The attitudes of various employers are revealed and we meet assorted clients and we are introduced to themes that delve into the stresses of working at the agency while issues such as ageism, childcare and such are examined.

The set design by David Fleischer for the major dinner party scene in the first act is minimalist with black walls and a large table with a blindingly white tablecloth. There is also a glamourous glittery silvery fringe curtain like effect, suspended from above, perhaps representing London life. For the rest of the play the use of the office is effective with clean lines and elegant blinds, neat desks and clunky computers this is a stark contrast to Joyce and Angie’s home which is cluttered and depressing.

It’s the dinner party in act one that this play is best known for, and it’s an extraordinary set piece, wonderfully performed.

Marlene is hostess (in an elegant blue outfit) and her guests, a mix of fictional and real women, include the feisty, dour Victorian explorer Isabella Bird (Kate Box in a purple checked restrictive Victorian era dress). Bird was well-known for her dislike of Australia and in some ways represents a defining section of Marlene’s self. Mitchell, as the 9th century Pope Joan, is amazing, in full Papal vestments and tiara, who proceeds to get deliriously drunk and reveals her confronting story. Then there’s the uncouth Dull Gret (Contessa Treffone) from Flemish folklore; the ultra-refined exquisite 13th century Japanese courtesan Lady Nijo (Michelle Lim Davidson) a vision in a glorious trailing kimono and glowing Griselda in gold and bronze (Paula Arundel).

In this extended scene in particular you notice the overlapping and interruption of speeches and the disjointing of rhythm. They mourn lost loves and children and speak frankly about men and sex. Jokes are interspersed with tragic stories. Each of them in some way highlights a feminist issue and defies categorisation, and each should be proud of her achievements.

The rest of the play feature fine acting by Treffone as Angie, Marlene’s teenage niece, who idolises her aunt and dreams of escaping to London. We also see the intense sisterly bickering between Joyce (Kate Box) and Marlene – Joyce resents Marlene’s dynamic life and career in contrast to her humdrum routine life shackled to her home – and other explosive family secrets are revealed. Marlene’s many carefully constructed layers; her assorted faces of career power and self-denial are excellently delineated by Thomson. A serial monogamist, Marlene has fled long term involvements in case they interfere with her career and grapples with difficult modern expectations. Can one be a mother and work? Can one have it all? In some ways the structure of Top Girls could almost be viewed as two separate plays.

The 1980s outfits and hairdos for the office scenes of Top Girls are terrific. A stellar production of this demanding, thought-provoking play that confronts issues which are still extremely relevant today.