Review: The Importance of Being Earnest, Malthouse Theatre (VIC)

There’s never been anything quite like this iteration of Wilde’s sparkling comedy in which Jon Haynes and David Woods perform all nine roles.
Thuy On 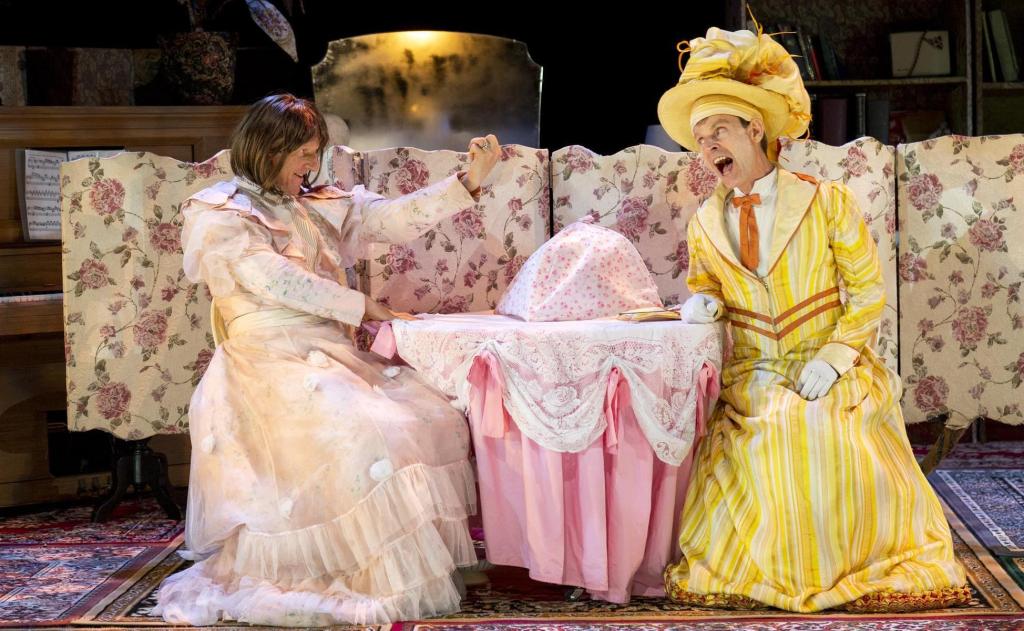 David Woods and Jon Haynes in the Ridiculusmus production of The Importance of Being Earnest. Photo: Pia Johnson.

Arguably Oscar Wilde’s best play, there is nothing more frothy and witty and downright satisfyingly plotted than The Importance of Being Earnest.

Innumerable stage and film versions of the play have been presented since it was first written in 1895, but there’s never been anything quite like this iteration in which Jon Haynes and David Woods (collectively known as Ridiculusmus) perform all nine characters. How the duo manage to wrangle this multi-personae drama is well worth watching. It takes perfect timing and a hell of a lot of nimble costume changes on and off stage. Even when they mess up, Haynes and Woods are, quite simply, hilarious.

On a chintzy set more shabby than chic and with help from a ragtag collection of bad, ill-fitting wigs; frou frou dresses; a mannequin; some puppets and one particularly hideous hat with a fowl atop, the two put on distinctive voices and behaviourisms for every character: the foppish lounge-abouts Algernon and Jack; their amours Cecily and Gwendolen; Miss Prism and Reverend Chasuble, the butlers Lane and Merriman and of course, the imperious Lady Bracknell.

How Haynes and Woods manage to move from one character to the next without faltering in their high-octane efforts is hugely impressive; they bring slapstick comedy to theatre that is already very silly indeed when played straight. Watch out too, for judicious use of modern, anachronistic music (like The Smiths) and a very cheeky insertion of some ribald humour not present in the original.

This is a revival of a show that first appeared in 2004 in Brisbane, this farce that Wilde subtitled ‘A Trivial Comedy for Serious People’. Certain words and phrases have been lodged forever in the literary lexicon thanks to the playwright including ‘Bunburying’ and ‘A handbag!’ in the text. Even if, like me, you’ve seen The Importance of Being Earnest countless times, and know the plot intimately, this version will make you appreciate it anew thanks to the inventive spirit and frenetic energy of the two leads. Guaranteed tittles, smirks, and loud, barking laughter.