An eclectic exhibition that offers a different take on stop-film animation, drawing and woodblock prints.
Gina Fairley
[This is archived content and may not display in the originally intended format.] 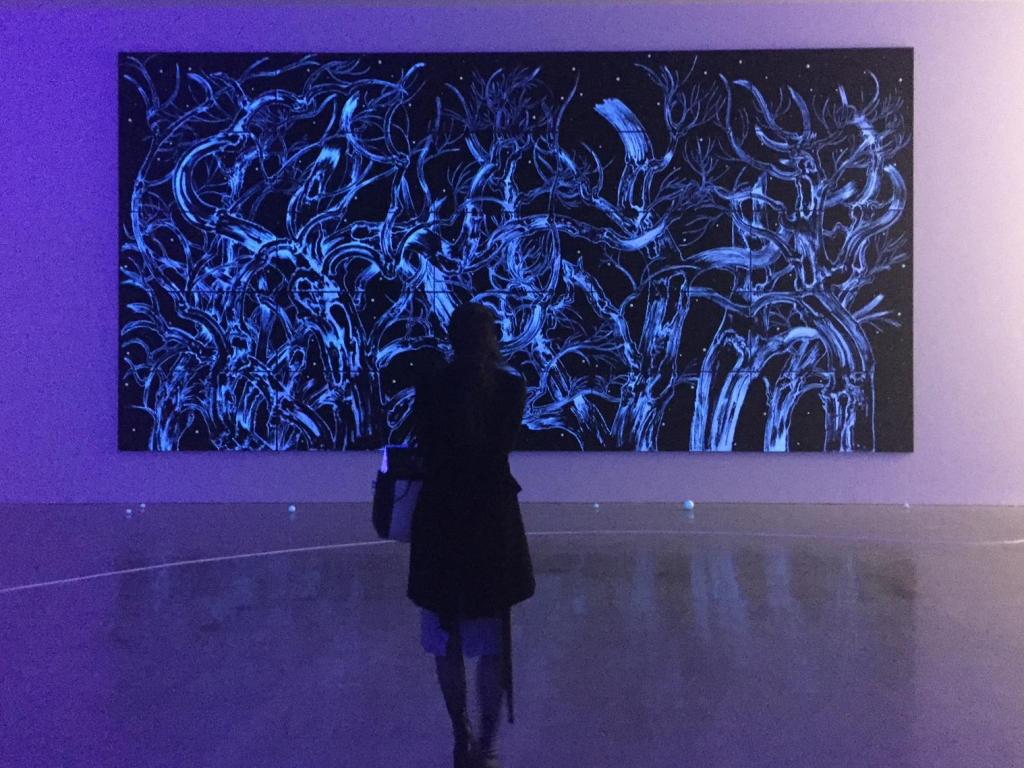 This exhibition has been a number of years in the making, but then that comes with an artist who is travelling more than eight months of a year with work.

MCA’s Senior Curator was first introduced to Sun Xun’s work in 2012; started conversations about an exhibition in 2017, and this week has unveiled his first solo exhibition in Australia. This exhibition occupies the entire ground floor of the MCA;  their double-story, white box space presenting newly commissioned work for Sydney.

Walking into the first gallery, one can’t help feeling overwhelmed – simply, this show is congested. Rather than a curatorial flaw, it perhaps speaks more of a cultural and personal spatial read.  One of Australia’s greatest privileges is space, and like Sun Xun, it can impact our view of the world.

The first work viewers will encounter is one inspired by Sun Xun’s fluid travel. Quick sketches done in airport lounges or on the fold-down travel table of his economy seat, Davis said these works are made using the free newspapers in airports. Surprisingly – given their visual punch – this is the first time they have been exhibited, and their looseness offers another view on Sun Xun’s work.

Installation view of a new suite of drawings shown for the first time by the MCA; photo ArtsHub

Like all Chinese artists, Sun was trained in many styles, drilled until proficient. This probably accounts for the eclectic quality of his oeuvre.

We only need consider these new newspaper sketches with an adjacent multi-screen that pays a nod to Japanese traditions. Davis explained the cost of the paper used in this screen is more expensive than traditional silk which indicates the level of confidence and skill that is demanded of the artist.

The screen includes images of crabs and kingfishers – Australian animals not typical of such screens – and again points to the way that travel influences Sun Xun oeuvre of work. We quickly start to get a sense of his obsessive practice and unique take on the world.

Important to this exhibition are a number of animations that have been key to the last ten years of his career. Off to a side gallery are two of Sun Xun’s 3D animations using the plates of woodblock prints, one film Time Spy (2016), made from over 10,000 individually carved woodblocks.

Davis recalls walking into Sun’s studio and seeing a knee-high pile of woodcuts of a single wheel – the animation for a simple rotation. She laughed, ‘Like who animates a woodcut?’

While Sun studied printmaking he never wanted to make prints, rather choosing the woodcut itself as a medium. These two animations are partnered with a pair of framed woodblocks at the entry to the space.

Another gallery presents 21KE (21 grams) (2010), Sun’s animation that awarded him at the Venice Film Festival, and triggered his fame. It was his first long-form video. In it appears a figure in a top hat that repeats across his work – the magician – and it conveys a fantastic sense of a modern world. There are some lovely moments in it – like a strange flying machine that drops propaganda.

Largely Sun Xun’s films are without dialogue, however the musical score builds narrative. This is especially prevalent in the two-screen animation Tales of our Time (2016), which has more of a expressionistic, contemporary stop-motion animated feel. The piece was commissioned for the permanent collection of the Guggenheim Museum in 2016.

With its cinematic and expansive narrative, it is perhaps the jewel of this exhibition. The work looks at layers of time and history through the lens of his hometown Fuxin (formerly Manchuria), which is famous as one of the largest open cut coal mines in world.

That role of drawing is fleshed out further across this exhibition, Sun Xun moving from this stop-film animation to actually working in the gallery space to create a site-responsive wall drawing.

Across the MCA foyer are the newly commissioned works – a 40-meter long drawing and another comprising 25-woodcuts (pictured at the top of this review).

I have divided responses to this work. I can’t help but find a kitsch quality to it – a constellation of animals not dissimilar that the zodiacs rendered in glow in the dark paint, punched into psychedelic volume under ultraviolet lights.

Sun describes it as ‘being in the forest and looking up to universe, and then turning around and you are in the universe.’ What is perhaps more impressive is the papers created by artisans from mulberry paper.

Can we forgive Sun Xun for his cosmic trip? This work will no doubt please and impress audiences. Overall, this is an exhibition that intrigues. Davis says in a MCA blog post: ‘Ultimately, I love how Sun Xun’s work creates a parallel world; it is like stepping through a doorway into another reality. This reality is quite dark and mysterious, with dystopian landscapes, strange mythological creatures and top-hat-wearing magicians. There’s this feeling of being submerged in another realm. For me, this is one of the most exciting aspects of his work – the way it takes you to a place that is completely alien to what you have experienced before.’

What interests me is Sun Xun’s capacity to push beyond the stereotypes of medium; to be so confident in his own experimentation and execution that technicality, or hierarchies become secondary. We are witness to the pure pleasure and obsession of an artist’s response to the world around them, and there is something deeply authentic in these works that overrides any preconceptions surrounding the hype of contemporary Chinese art or aesthetic criticisms.