A retro exhibition brings the Sixties back but with detail you’ve never seen before.
George Dunford
[This is archived content and may not display in the originally intended format.] 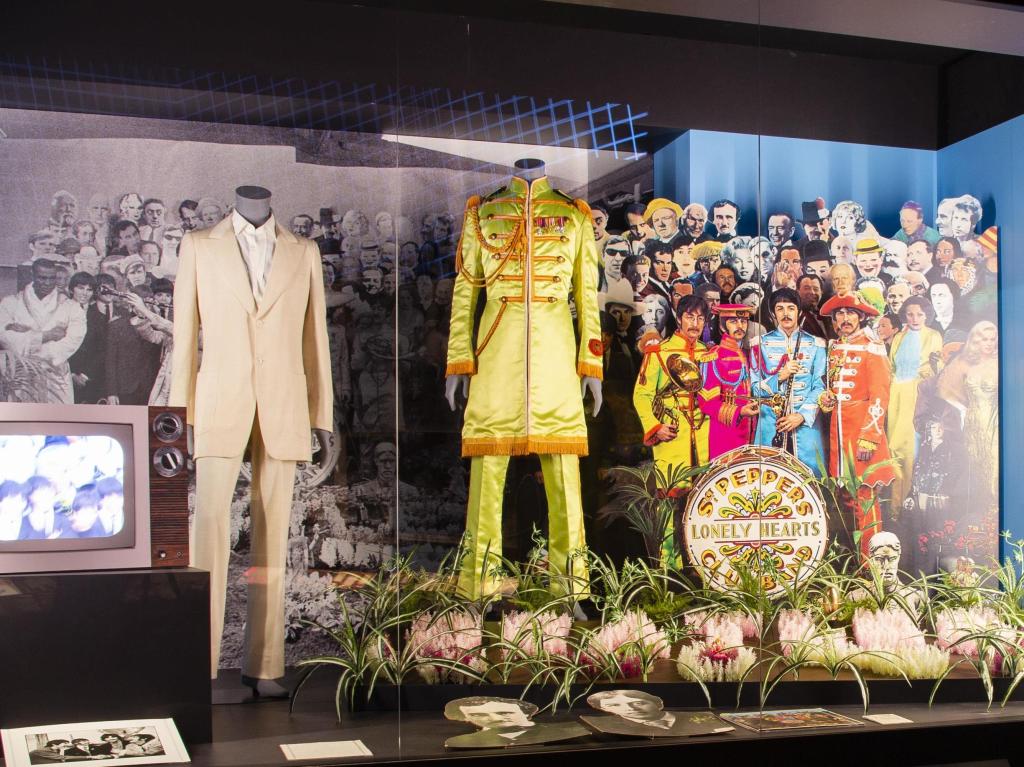 Revolutions come in many forms. Some spin at home in black vinyl while others take to the streets for riots and placards. For this exhibition based on the Victoria and Albert Museum (V&A) collections of costumes, posters and more, the revolution is a period of the late 1960s that made noises in London then echoed out across the world. You might think you’ve seen the Sixties before but Revolutions looks deeper.

The scale of Revolutions is mind-bending with 500 objects telling the story of 1966-1970. There is plenty of baby boomer fan service: John Lennon’s glasses, The Who’s Pete Townshend’s first smashed guitar, Jane Fonda’s Barbarella costume and the scribblings of Woody Guthrie’s journals. Experiencing these actual objects still has some magic – the Beatles’ Sgt Pepper uniforms are given their own display fitted out as the in-progress album cover and the music in your headphones shifts to play the record.

Because the objects could only tell so much of the story, there’s an aural layer. The accompanying headphones play through a Sixties playlist complete with vinyl crackles between tracks. At key points the audio shifts as you enter a new zone, such as the protest section where you hear Martin Luther King addressing crowds. It’s not quite as intimate as the David Bowie Is exhibition, a previous V&A exhibition which pioneered the sound that follows you through the exhibition, but the subject is so much bigger. The better soundscape comes from taking your headphones off and watching the Woodstock immersive where the definitive Sixties concert is on three stage-style screens but writ large so every fret of Hendrix guitar is on an epic scale. Pull up a beanbag and drop out.

Grouped around key themes such as Communes and Consumerism, there is much to support the myth of Sixties as the great epoch of social change but also to document how the decade itself evolved. The Protest section nods to the easy creation of badges or posters to make social revolution possible, but this soon leads to the shock of Consumerism where those baby boomers became a market that bought up new clothing – including the original Levi jeans that were once so counter-cultural.

Melbourne Museum has added Australian elements to the exhibition that are dwarfed by the borrowed icons. Coming out of the Woodstock room, you might see posters for Sunbury rock festival, or as you walk away from the Black Panthers display there’s a small room labelled Yes/No for the 1967 referendum. A referendum on constitutional amendments is not radicalism on the Black Power scale though. The Australian additions feel like echoes from the bigger Sixties in Swinging London, Warhol’s New York or 1968 Paris.

On leaving you’re given two conclusions. The most obvious shift is into the pale heaven-scape of John Lennon’s Imagine, complete with song lyrics and the coat he wore in a promotional film for the song. It’s the hopeful end note. Alternatively, you can watch the last screen on the wall which finishes with John Hamm’s Mad Men character meditating the last of the 60s away as he dream up the song I’d Like to Buy the World a Coke. The song was a death knell for counterculture as its messages were absorbed into mainstream capitalism. Here at the end of the exhibition, it fast forwards through time (and Coke jingles) showing us the Rubik’s cube, then the Sony Walkman, then grunge into Pussy Riot. You can almost see Flower Power wilting.