A feel-good performance bringing together Digi Youth Arts, Queensland Choir, Deep Blue Orchestra and didgeribone player Tjupurru.
Gillian Wills
[This is archived content and may not display in the originally intended format.] 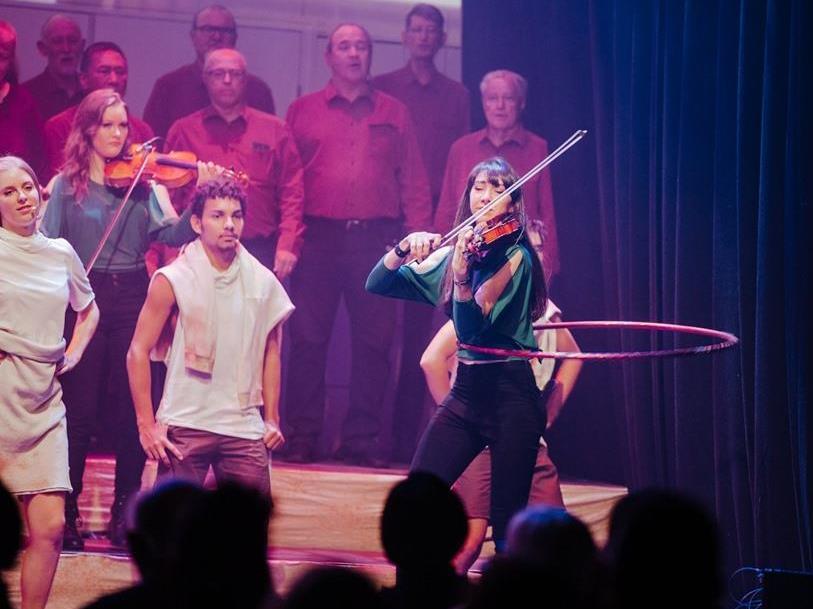 The premise for Our Place is a great concept. It conjures Indigenous homelands, our childhood homes, our neighbours, our dreams and aspirations, connection to place and draws together a cluster of art practices including dance, visual design, music, theatre, storytelling and funky grooves via didjeribone soloist Tjupurru. The artists and performers from Digi Youth Arts, Queensland Choir and Deep Blue Orchestra are different and yet artistically related as ideological and actual neighbours. Our Place was a brave mix of artistic endeavour.

It’s time yet again to wonder at the profusion of music festivals across the country including the Queensland Music Festival, because these events offer the freedom to trial new approaches, to present experimental music and explore unusual modes of performance as well as celebrate compositional voices not reflected in the concert hall’s mainstream programs.

Initially, the acting and musical elements were awkward and overly self-conscious despite an irresistibly syncopated stream of brilliance from Tjupurru on the side of the stage. Happily, the show burst through the opening’s air of constraint with Deep Blue’s performance of music by Robert Davidson. Compositions and covers arranged by Davidson, Richard Grantham and Greg Olley included a bring-the-house-down arrangement of Madhouse’s Our House.

After the ice was broken, the dancing by Digi Youth Arts was exciting and persuasive and the Queensland Choir began to engage and joyfully so, singing without sheet music and moving in concert with the performances. There was serious talent on stage which included Amanda Tio, Deep Blue’s amazing bass player, who partnered Tjupurru in an all too short, blistering conversational sequence. Viola player Sophie Ellis is a dynamo, deeply engaged and a natural performer who draws the eye. Enjoyable too was Deep Blue’s call-and-response thread where individual players articulated brief ‘calls’ and the crowd robustly sang them back.

The element of surprise was ultimately the program’s hero, from the entertaining and whimsical visual design and projected film clips to the mellow voices of the amplified string instruments which in the first half sounded plaintive, compelling and not unlike like the muffled cries of underwater whales.

String players in symphony orchestras are classical music’s foot soldiers, seated with their eyes glued to the music and often with an air of subservience to the concertmaster, the conductor and the orchestra they serve. Deep Blue players on the other hand drive the music while dancing in sprayed-on black jeans and Blunnies. Cavorting across the space, playing their instruments while delivering dance moves, or, as a violinist and cellist demonstrated, while walking on stilts. Peddling individuality, the instrumentalists also reveal an ironclad unity, strong rapport with each other, and a serious belief in the ‘band.’

Once the show was in gear, the audience enjoyed Deep Blue’s cheeky players, the singers, the soloists and the dancers from the Digi Arts Quartet. And it was a blast to see the classically-oriented Queensland Choir directed by Kevin Power in such a new context, laughing and swaying in step with the fat beats and pulsing riffs. The choristers roamed around the seated cabaret style seating at times and contributed resonance and depth and added texture and were a regular feature at the back of the stage. The overwhelming feel-good factor, never mind the odd frayed edge or coy moment, was how the dedicated cast and the audience enjoyed some mutually-beneficial, good-hearted fun.