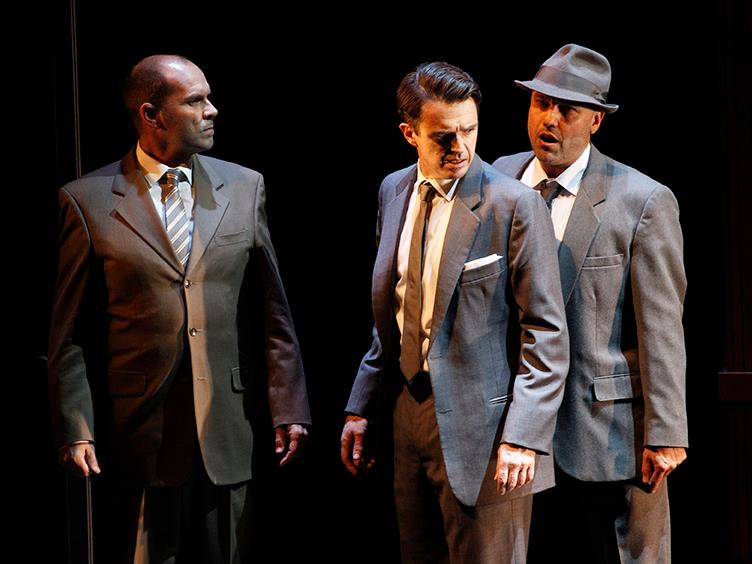 Alfred Hitchcock created a film classic with North by Northwest in 1959. It was a thriller, it was stylish, it was sexy, and it featured that now-legendary scene with Cary Grant being hounded by a crop dusting plane.

Adapting such a famous property for the stage some 60 years on clearly comes with a whole raft of challenges and responsibilities. The accomplished team of playwright Carolyn Burns and director Simon Phillips, partners in life as well as theatre, have together created a production that combines the best of the film with the magic of modern technology and all wrapped up in sophisticated stagecraft.

This production uses a deceptively simple, streamlined set that creates clever illusions and facilitates quick scene changes eliminating any awkward pauses that might slow the action. And the lighting and music combine to create just the right balance between romantic romp and thrilling tension. But it is the special effects, skilfully presented from side-of-stage so the audience is fully in on the joke, that really make this production something special. The Mount Rushmore Presidential Monument has never been so creatively portrayed on stage.

All of those marvellous party pieces would be worthless without the sterling performances of the cast. Actors Matt Day and Amber McMahon are brilliantly engaging as Roger O (‘It stands for nothing‘) Thornhill and Eve Kendall. They have been playing the lead roles since this production opened in Melbourne in 2015 so they are smooth as silk on stage. Just watching them together is a delight. British actress Abigail McKern is wonderful as Thornhill’s mother and also appears in other minor roles. Most of the cast come and go in various guises, giving the performance an authentic repertory quality.

The show is accompanied by a fascinating exhibition Hitchcock: Master of Suspense in the Festival Theatre’s QBE Galleries. There is a lot to see, so it’s worth arriving early to really appreciate it.

It’s clear that the Adelaide Festival Centre has opened 2019 on a high with this glorious production. As a seasoned theatre-goer was heard to say at the after-party on opening night, ‘I actually think it’s the best thing I’ve seen on stage’. High praise, and in this case, entirely warranted.