This is a brave exhibition on many levels. It feels like a slow dance between veiled narratives and the raw and revealed – a chance to navigate the monsters of our contemporary stages, and if lucky, find empathy through the journey.
Gina Fairley 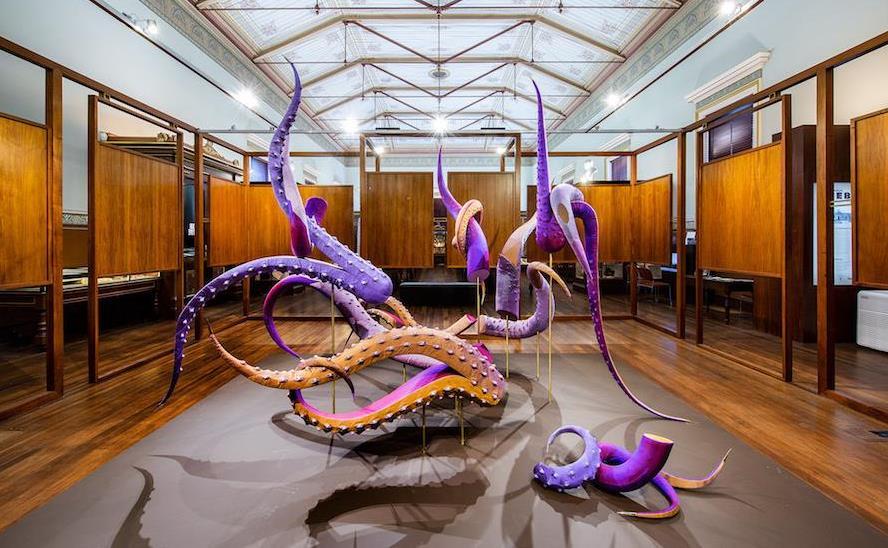 Leigh Robb’s 2020 Adelaide Biennial has been greatly anticipated – not just for its theme, which seemingly taps a zeitgeist of global fear and trauma, but she has been a curator to watch, with a track record for delivering considered exhibitions.

Presented by the Art Gallery of South Australia (AGSA), Monster Theatres was a more modest take on the biennial spectacular with just 24 artists / collectives exhibiting, an advertisement for the motto ‘less if often more’.

While the number of artists is compressed, by no means is the ambition or the footprint of this exhibition – five projects pushed into the traditionally-toned Melrose and Elder Wings at the gallery, while six projects were cited across the Adelaide Royal Botanical Gardens, with two of Australia’s most senior performance artisst – Mike Parr and Stelarc – in the gallery at the same time delivering work.

AGSA Director Rhana Devenport told ArtsHub: ‘Pierre Mukeba is in his 20s and there are three artists in their 70s, and she’s not afraid to work with Stelarc and Mike Parr in the same show at the same time – now that’s a confident young curator.’

While in many ways this was the exhibition primed for 2020, with its disaster-reeked tone of gloom rolled out, it had a surprisingly intimate read.

In many ways it could be described as an artist-led exhibition, as each took on their own monsters, and invited viewers to take a deep dive into their dark and mysterious take on our contemporary world.

Collectively, however, the exhibition presented more like a shuffled deck of cards – individual projects holding their own, rather than a thematic stitching of threads from room to room. For example, as audiences descend the main stair to the lower galleries they are presented with an installation by Mark Valenzuela that calls on the anarchy of Filipino shanty architecture and animist beliefs as monsters of prophesy and disaster; then the viewer moves into Abdul Abdullah’s stand-up theatre of racism, which leads to a suite of paintings by Aldo Iacobelli, and then into the 9-metre robotic sculpture Model for a Reclining StickMan (2019) by Stelarc. They are quiet disparate.

The threads are there if you really want to push and pull to find them; alternatively, you can just enjoy the work. Is that such a problem? No, and it is somewhat formulaic of biennales, but just feels more diffused when you are working on a scale of 150+ artists rather than 20+.

So then, how does this tight kernel of oddities read as an exhibition?

Take a dive on the dark side

Hand-in-hand with trauma comes empathy – well in an ideal world. Robb offers a platform for viewers to find that meeting place, between speculation, perception, paranoia, opinion and yes, empathy.

In some ways, Robb picks up where former AGSA Director left off with Dark Heart, his version of the biennial in 2014, with its probing conversations around asylum seekers, the contamination of native lands, greed and waste – a warning at a time when Australia was sitting in a tough political climate.

Has all that much changed? What is obvious is that the messages have become more urgent for their lack of forward progression.

One of the sure highlights is Karla Dickens’ carnival-esque sideshow installation, A Dickensian Circus (2019), which is a dark exposé of Aboriginal “attractions” on the country circus circuit, pitting funfair humour in tandem with racism – a spectacular of the perceived monsters of society, past and present.

Dickens is riding high at the moment, also included in the 2020 Biennale of Sydney and selected this week for an AGNSW façade commission.

In the gardens, Yhonnie Scarce reclaims the Deadhouse, once used to house Aboriginal bodies awaiting dissection for “medical purposes”. In an act of healing, she has placed blown glass bush bananas on gurneys, symbolically flayed open.

To use a site so imbued with trauma and history – and one opened for the first time since that raw history – takes an incredible amount of trust between artist, curator and venue, and this is where we are witness to a level of empathy that sits at the counter-swing of past institutional doctrine.

Scarce’s work was also recognised as the recipient of the $60,000 Yalingwa Fellowship and the National Gallery of Victoria Architecture Commission 2019, which is still on show.

Adding to this theatre of racially-driven monsters, is Abdul Abdullah’s Understudy (2020), which sits alone in a faux theatre, an open mic at the ready.  A monkey dressed in designer street wear becomes an alter-ego – a stand-in for the parallels of peripheral sub-cultures to ghoulish cinematic portrayals of Godzilla and King Kong. It is said to reflect the artist’s outsider experience in post-September 11 Australia – one of demonisation and marginalising, but in a more common viewer experience it pulls us into check for our voyeuristic distaste for the “other” and our tendency to single out and jeer.

In their hands, along with artists Judith Wright and Megan Cope, the object is a vessel for trauma and fear, and in a curious way, claim back the object usurped for alternative narratives.

Another current through this exhibition is the monsters within, a psychological theatre of loss and abuse. Wright’s room-sized installation Tales of Enchantment has a menacing quality, and yet is a memorial to a lost child, played out as a kind of shadowy surreal underworld.

Across a large body of work, Brent Harris’ paintings feel like quirky abstractions on first glance, only revealing a darker underbelly as a story of an abusive father. They are masque documents of a hellish theatre, which demonstrates arts capacity to communicate and heal, should we let it.

Perhaps the real demons are in our self and our capacity to cope or face things. 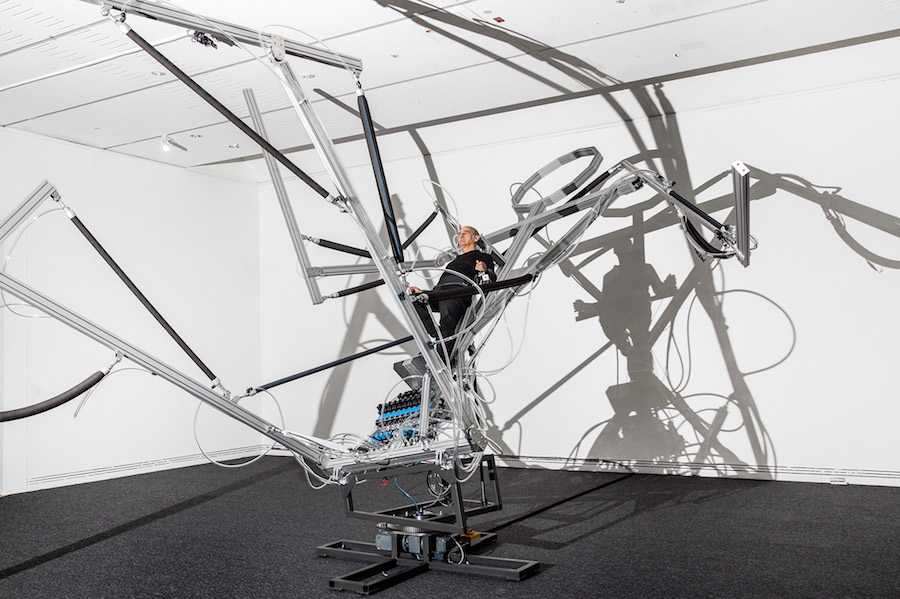 The monsters of self and the performative body

The performative body has a strong accent across this biennial with works by Stelarc, Mike Parr, Garry Stewart and the Australian Dance Theatre, Mike Bianco, Aphids, Julian Day, and David Noonan.

For six days, Parr presented a durational work where he read from an adapted 100-page script based on a Roland Barthes text, Reading for The End of Time, which he has modified for dramatic pause and repetition. As time passes, Parr competes with his own image reading the text in a video playback – his monster his demanding self and his own boundaries of limitation.

In another work that points to text, Julia Robinson’s stunning soft sculpture Beatrice (pictured top) has a menacing caged quality in the Museum of Economic Botany, despite its beautiful fabrication – hand sewn plush purple tentacles capped off with gold tips. One almost feels like this severed serpentine creature will flick around and strike at any moment.

Other highlights of Monster Theatres are the works by Mark Candy and Mikala Dwyer.

The biennial celebrates its 30th year – which Director Rhana Devenport described as ‘much more than a title, hitting spectacle square in the eye and staring the beast down’, in an earlier interview with ArtsHub.

I would have to agree. This is a brave exhibition on many levels. It feels a bit like a slow dance between veiled narratives and the raw and revealed. 2020 is going to be one of those years that is going to be remembered by history for its trauma – its monsters in our theatre of contemporary life – and Robb has been incredibly perceptive in allowing those conversations to surface and find their own pace in the mess of it all.

Gina Fairley travelled to Adelaide as a Guest of the Art Gallery of South Australia.