With over 100 sculptures ranging in scale from 20cm to three meters tall, this is a dynamic and cohesive exhibition with a punchy impact.
Gina Fairley
[This is archived content and may not display in the originally intended format.] 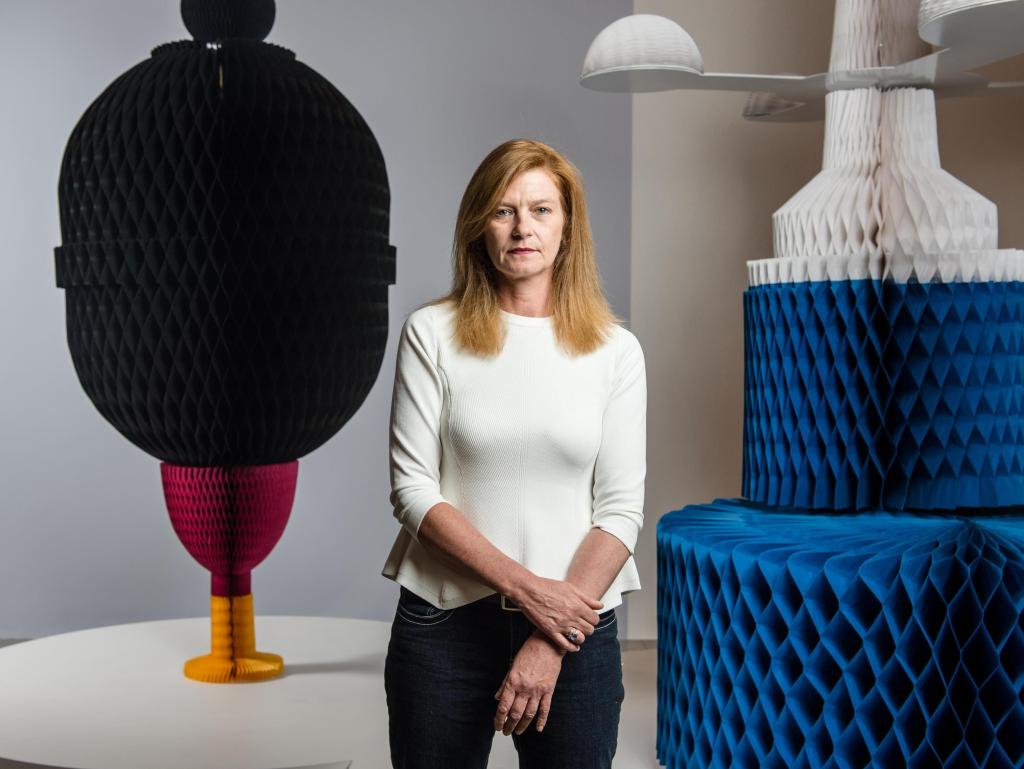 Portrait of the artist inside her solo exhibition, Louise Paramor: Palace of the Republic at NGV Australia at Federation Square, Melbourne. Photo credit: Eugene Hyland.

Who’d have thought that plastic household items would get me so excited? Across her career, Melbourne artist Louise Paramor has always played with the emotion of surprise in her sculptures, combining the familiar with a playful, yet eruditely modernist aesthetic. It is a hard thing to pull off – to appeal to both ends of the audience spectrum – but she manages to do it without coming across as forced or trite.

Her survey exhibition at National Gallery of Victoria (NGV), Louise Paramor: Palace of the Republic sees that sense of confident play amplified, as if on steroids, across a decade of making.

Walking into the first gallery visitors encounter a suite of eight of Paramor’s honeycomb-inspired paper sculptures, which stand totem-like at over three metres tall. Their simple forms mean that their lofty presence is non-threatening, and they don’t have the “coldness” of heavy metal, which we expect of sculpture at this scale.

Commissioned by NGV Australia especially for this exhibition, the Palace of the Republic series employs a unique technique that Paramor first pioneered in Berlin in 1999, during a one-year residency at the Künstlerhaus Bethanien.

Both the title of this series, and the exhibition, refers to the now-demolished seat of the German Democratic Republic (GDR), a kind of utopian socialist landmark. It was situated opposite the original Lustgarten, or ‘pleasure garden’ – and was the name of the first paper series Paramor produced during that Berlin residency.

While that might be a nice neat circle of reference, in this gallery space and alongside Paramor’s earlier work, they seem to have a seamless conversation with her homey plastic assemblages. As Paramor says, ‘[They] are suggestive of the dichotomy between grandeur and pragmatism.’

Each of these enormous paper sculptures is created through a meticulous process of cutting and gluing layers of paper. They are then pulled, or unfolded concertina-like, 360 degrees around a central axis to form a voluminous, boldly-coloured object.

In an interview with NGA staff, Paramor said of the new works: ‘The scale was another challenge, the monumental height of the new works meant that steel base-plates and armatures were required.’

She added: ‘In fact, the largest of the new paper works is a translation of a very small (8cm high) assemblage, comprised of two fishing lures and a vacuum cleaner part.’

While this particular work is not included in the NGV show, it has been a starting point for Paramor’s next series that she says, ‘will be even smaller than the Boomtown series.’

As a viewer, it is easy to see this connection across her oeuvre – pointing to, connecting, pumping up and shrinking forms over time. It is this eloquent understanding of scale that has the most resounding impact, and has become a kind of signature to Paramor’s work, alongside her pop-punch use of colour.

This second gallery feels a little cramped, one series blurring into the next, with near 100 sculptures on display and a swarm of activity. To help demarcate the various series, the walls have been block-coloured. I am in two minds whether it was successful or added to the visual clutter.

Off to one side, and stretching the length of the space, is a selection of assemblages from her Supermodel series (2014), each individually named: Mario, Uma, Victoria and the like. They have a slight anthropomorphic quality – a cast of characters if you like – and sit along a thin, raised museum pedestal alluding to a catwalk. There is a decisive elegance about these sculptures and, if anything, the viewer is drawn to them first as they are easily digestible.

Installation view of Supermodels (2014) in the exhibition, Louise Paramor: Palace of the Republic, on display at NGV Australia. Photo: ArtsHub.

On the verso of the wall between the two galleries is a suite of ten works from Paramor’s Stupa City (2011), inspired by a trip to India and playing with the blurry division between architecture and design.

Among them is the maquette for Paramor’s Panorama Station (2012), her huge commission along the Peninsula Link Freeway. Many of us have become familiar with her large-scale public works, including the hugely popular North Polar (2014), an upside down polar bear balancing plastic chairs and Ursa Major, featuring another polar bear chilling out at the back court of Federation Square.

This survey exhibition, however, sticks to her more abstract clusters.

Installation view of Stupa City (2011) in the exhibition, Louise Paramor: Palace of the Republic, on display at NGV Australia. Photo: ArtsHub.

Central to the second gallery is a selection of works from Paramor’s Jam Session series (2006-2007).  The sculptures float on a slightly raised blue platform and are made from found, recycled and repurposed plastic.

Paramor explained: ‘At the time I had a studio in Footscray and regularly frequented the nearby Vietnamese emporiums. I was inspired by the colour, volume and form of the plastic objects in these shops, which led me to gather interesting and colourful plastic flotsam from anywhere and everywhere. In the studio, I “jammed” these mostly domestic objects together to create formal sculptures.’

I think this is what makes Paramor’s work so successful – plastic is a material that is so familiar and of our time, and yet in a gentle way such works encourage creative engagement and experimentation.

Sitting to the rear of the gallery is again a punch between scales – a vitrine of maquettes next to the huge work Tritonic Jam Session (2008), which has been backdropped with a spearmint green wall in an attempt to create its own space.

Curatorially it makes sense, representing the another stage of Paramor’s career, taking those domestic objects from her Jam Sessions into the scope of industrial plastics.

Both the Supermodel and the Stupa City series were accompanied with paintings on various materials – sadly none of which were included in the NGV show. It is a shame as it would have allowed viewers to appreciate the full breadth of Paramor’s practice.

While Sansom and Barton’s exhibitions were accompanied by catalogues, it was a shame Paramor and Maudsley – who are less published generally – missed out on this occasion. Both shows are an incredible document of their work. The NGV has, however, published an interview with Paramor online.