Ultimately, the production plays more as a self-indulgent ode to the writer’s creative process than a story with a political message.
Ann Foo
[This is archived content and may not display in the originally intended format.] 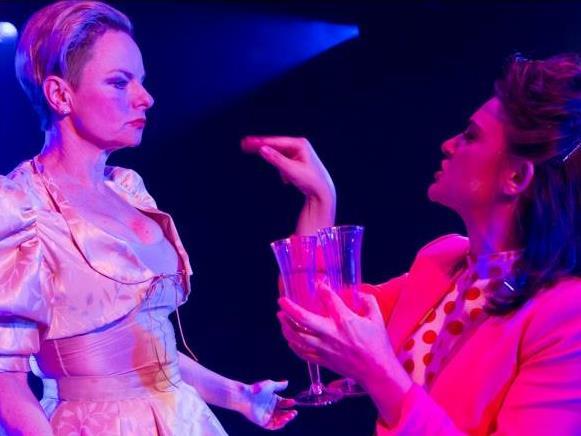 When incompetent Environment Minister Gwen Malkin (Rebecca Massey) announces a government-funded initiative to black out the sun in order to combat climate change, the media backlash is swift and incredulous. So naturally, she retreats from the public eye by attending a Fleetwood Mac concert. Little does she know that eco-terrorist Catch (Lucia Mastrantone) is planning to hold the entire concert hostage until the government puts an end to all carbon emissions and coal exports. With a title as provocative as Kill Climate Deniers, and a setup this ludicrous, its hard to separate punchline from premise.

Writer David Finnigan’s journey with this work began well before 2014, when the original production was shut down due to political outrage over the title before a single word of the play had even been uttered in public. Since then, Finnigan has been busy making merry off this title, which he expanded into a concept album, a walking tour of Parliament House, a film script, ebook and live art performance. Now, after Finnigan’s script won the 2017 Griffin Award, the play has finally seen the light of day.

This is Mark II of the play, and Finnigan has incorporated the real-life misadventures of the play’s conception into the play by inserting himself as a character, Finig. Elements of the other Kill Climate Deniers satellites, such as the concept album, film script and radio play, have also made their way into Kill Climate Deniers redux. The result is a mishmash of disparate narratives and messages which make it hard to engage with the story in a comprehensive way. Finig’s constant interjections during scene changes of “Screen wipe – fade to black – cut to – new scene” reek of amateur film-making and serve only to slow down the pacing and to remind us that this story is all construct and artifice. The narrative is further slowed down by musical interjections, including a detailed history of chosen tracks. Adding to this is the radio-play feel of the whole thing – it’s pretty much wall to wall dialogue. The resulting 90 minute play is extremely drawn out for the subject matter, and seems to have become a victim of its own publicity. The message of the story has become consumed by the journey to staging the play.

All works are flawed, and all flaws can be forgiven, if the message conveyed is a worthy one. Unfortunately, Kill Climate Deniers capitalises on a provocative title, but ultimately skirts provocation. No climate deniers in the story are killed, rather Malkin and her press adviser Bekken (Sheridan Harbridge) go from the hunted to the hunter, so when they end up taking out all the eco-terrorists, it is an act of self-defence and therefore murder is justified. Hence, there are no ethical dilemmas, there are no complex debates, it’s a very simple bloodbath which doesn’t deliver on the moral ambiguities suggested by the title. Somewhere at the start of the play, Finig says, ‘I didn’t believe Climate Change Deniers actually existed. So when I said “Kill Climate Deniers,” I wasn’t meaning to kill anyone.’ I don’t buy this for a second. If Climate Deniers didn’t exist, then the notion of killing them would be meaningless, akin to a statement about killing leprechauns. Finningan clearly chose this title for the impact, and that impact is rooted in climate denial being a very real phenomenon. If you’re going to be provocative, you’ve got to own it, but instead Finig squirms away from accepting responsibility for the furore. So the integrity of the writing, for me, was compromised from the start because I didn’t feel it was being honest, either with me or itself.

In keeping with the writing, Lee Lewis’ direction is unruly and over-the-top, fully embracing the ‘more-is-more’ ethic that underscores the text. Performances are non-stop, high-octane, and lack nuance or dynamics. Set design resembles a garage sale – an 80s performance stage, including a stripper’s pole that stays on set the entire play, although it is only used in the penultimate scene (hence giving away some of the comic surprise of the pole dancing scene). Plastic curtains – just for the hell of it. Two multimedia projections in the back which occasionally fed into the live video component. Artistic decisions which seem to be a consequence of a generous budget rather than considered thought about how those elements contribute to the work. ‘ENERGY, ENERGY, ENERGY!!!’ it bellows – for 90 minutes nonstop.

There’s laughs to be had, although making fun of politics is an easy joke to crack to a willing audience. Ultimately, it plays more as a self-indulgent ode to the writer’s creative process than a story with a political message, and this in itself feels like a cop out, as if the debate at hand were too challenging and complex to explore. Perhaps this ‘Real Life Misadventures of Finig’ has value – but piggy-backing it off the fiction of Kill Climate Deniers prevents either narrative from being explored with any depth. As a climate change activist myself, it was disappointing that the most offensive thing about this play was the way it loses its message in the conversation.