An electrifying solo exhibition by Walmajarri artist John Prince Siddon, All Mixed Up lives up to its title in spectacular ways.
Jo Pickup 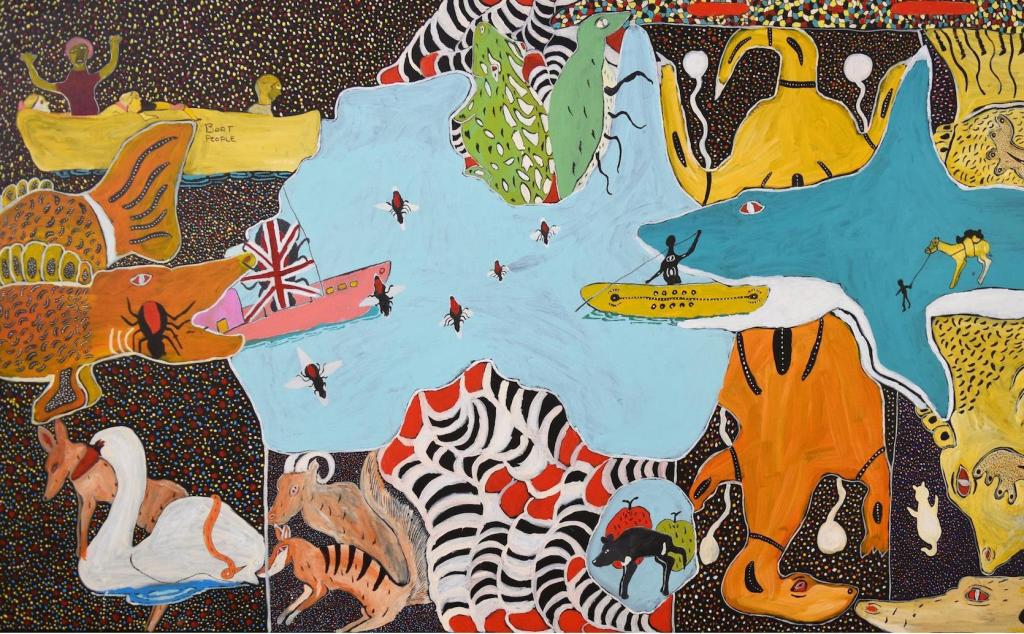 John Prince Siddon, from Fitzroy Crossing in the West Kimberley region of WA, began painting after a horse-riding accident left him unable to continue working as a stockman.

However, his move from the cattle station to the studio was not as unlikely as it seemed. Siddon’s father is the late Pompey Siddon – an artist in his own right and a founder of Mangkaja Arts (1981), which is now one of the Kimberley’s most vibrant remote arts centres.

Whilst Siddon’s primary place of artistic practice is in fact at his wife’s care facility in Fitzroy Crossing, he has had an important association with Mangkaja Arts, and with independent curator Emilia Galatis.

These forces have combined to dazzling effect Siddon’s first major solo show at Fremantle Arts Centre. Here, the show’s curator (Galatis), has drawn together a series of Siddon’s psychedelically-surrealist paintings and sculptures which, almost ironically, bring some the most urgent themes of our time into piercing view.

On entering the gallery space it’s impossible not to be awestruck (and overjoyed) by the amalgam of high intensity colours and patterns on show. Some paintings are hung against boldly-coloured walls, others surrounded by patterned floor-to-ceiling wallpaper (designed with tessellated prints of Siddon’s key themes).

Despite this teeming array, the works are cleverly placed to prevent over-saturation, which is vitally important to the viewing.

Siddon’s compositions are crowded with a myriad strange creatures, twisted landscapes and cascading shapes, but they each contain fine details that warrant close attention. Once attuned to the seemingly tiny elements within Siddon’s hybrid jungles – worlds in which Indigenous Dreaming characters swirl among present-day Australian icons – only then will the stunning sting in their tails truly strike through.

And stunning is undoubtedly the response when discovering Siddon’s biting yet humorous social and political commentary on Australian society today.

His painting Escape, 2019, for example, could be read as a premonition on Australia’s recent bushfire crisis. Central to this work are a group of wildlife clinging together as if in a tower of survival – a grasshopper sits atop a lizard, on a possum, on a koala, on a snake, on a bright red ladybird – all marooned on a lily-pad adrift in a sea of flames (bright yellow and red stripes).

Then in Dedication, 2020, Siddon paints a melange of cop cars, fire-trucks, lizards, snakes and swans all spewing water hoses in attempts to quell the flames across the country. The land is on fire, the houses are on fire, even the Catholic Church is on fire, while in the foreground a large green parrot descends on a floating head of Scott Morrison which hangs helplessly in the air as the bird picks a pea-sized pellet from his half-shaven skull.

I have yet to see (or read) such layered and thought-provoking narratives which articulate some of the complexities of the present-day Australian experience anywhere but in this gallery. Walking away I was struck by Siddon’s insights into many of the social tensions in contemporary Australia, and on the flip-side, a renewed understanding of our ancient natural environment as being at the core of it all – the vital (yet presently flailing) source of all life.

Indeed, it’s all mixed up. And while it’s too late to un-mix the strange colonised-web of our present, with any luck John Prince Siddon will continue to offer his visions of Australian realities (past and present), underlined with his unique sense of both optimism and caution about our places within these worlds.

This solo exhibition is a significant showcase of a hugely exciting talent which has been curated in impeccable style.