Review: Jesus Wants Me for a Sunbeam, Belvoir (NSW)

A dark and clever work that produces visceral, divided responses from the audience.
Dennis Clements 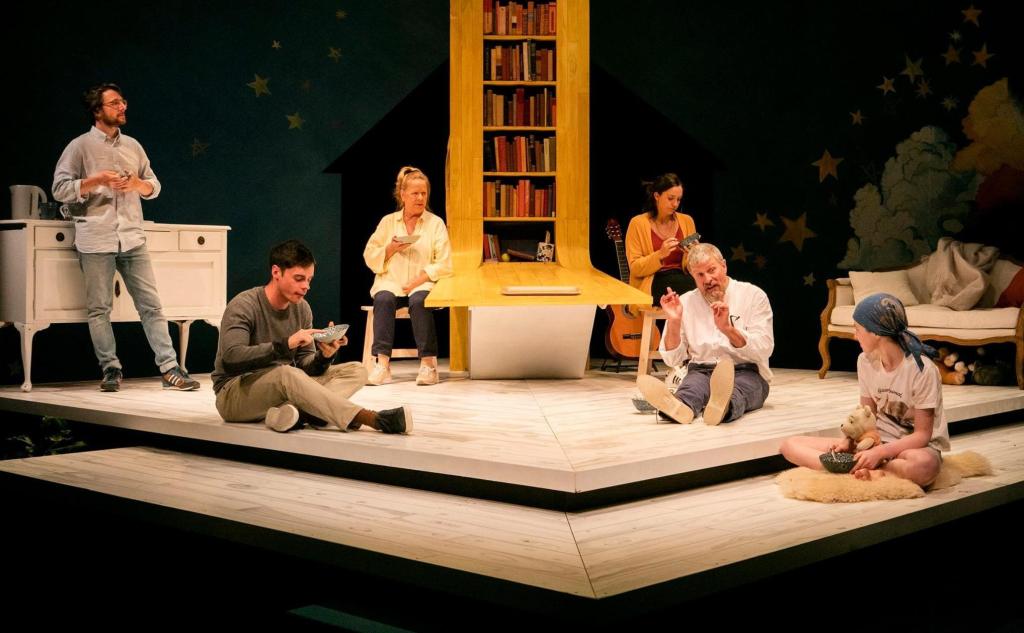 After impressing audiences at Riverside’s National Theatre of Parramatta, Jesus Wants Me for a Sunbeam is now playing at Belvoir. Photo: Brett Boardman.

Let’s start with the superlatives: This is an extraordinarily thought-provoking work, crafted cleverly by writer Steve Rodgers from the novella written by Adelaide author Peter Goldsworthy. It is sensitively and intelligently directed by Darren Yap with moving performances by truly superb actors, on a striking, stylised set.

The writing is spare and succinct, and Yap wisely trusts his actors to reveal the tale with simple staging and a clear focus on character. Quite simply, if you like great theatre and want to leave talking about how you felt about what you saw, rather than where to go for supper, then this is the show for you.

But don’t expect to agree with your theatre companions. I suspect this work will provoke vastly different responses from people, depending on their core belief system and values. And I’m pretty sure that is its intent. The playwright notes that it is about love and grief, I might re-word those into obsession and pain. But that is the grey area about which the work forces you to have an opinion.

It would be improper to divulge the plot or ending – you need to see the piece for yourself. But it does not give too much away to say that it concerns a very tight-knit family who face the ramifications of a serious illness amid their ranks. As that illness progresses, the family face questions that all of us face, and they make decisions that not all among us may make.

It is how this family explore love and life that will divide you. The writing gives the audience different viewpoints, often through the religion or atheism of the character speaking. And you find yourself making a choice. This is not a story you can distance yourself from, because it evokes a quite visceral response, and it would be remiss of me as a reviewer not to discuss my own, because I think that is really the reason for the work. It demands discussion. Coming from an unashamedly atheist attitude, I sided with the doctor, and ultimately found the story a tragically distasteful tale of breathtaking selfishness. I grew to dislike – even despise – the central parental figures more and more as the night progressed, but as previously noted I was aware others with tissues may not have been having the same response as me – as it should be with all good performance. That I felt so passionately is testament to the superb theatre craft at play in this production.

I cannot single out individual performers – each talent in this ensemble of actors is worthy of mention. Valerie Bader, Emma Jackson, Mark Lee, Liam Nunan, Grace Truman and Matthew Whittet are all quite faultless and infinitely watchable. They connect moment after moment with simple truth and open hearts and it is a privilege to see such wonderful work.

The black comedy inherent in the show’s title does much to set the tone of duality in the writing. Some people will find this work heartrending, others confronting, while others will be angered. But for once the words ‘thought-provoking’ are not merely a marketing tagline, and I highly recommend you discover this journey for yourself.

It’s only 80 minutes with no intermission so there’s plenty of time for a bite afterwards, and you will probably want to talk about what you saw. But whatever you thought or felt, the questions are likely to stay with you long after supper ends. Definitely take tissues – but you might not need them.