This immersive sound installation in the depths of the Tasmanian bush is deceptively simple yet strikingly profound.
Richard Watts
[This is archived content and may not display in the originally intended format.] 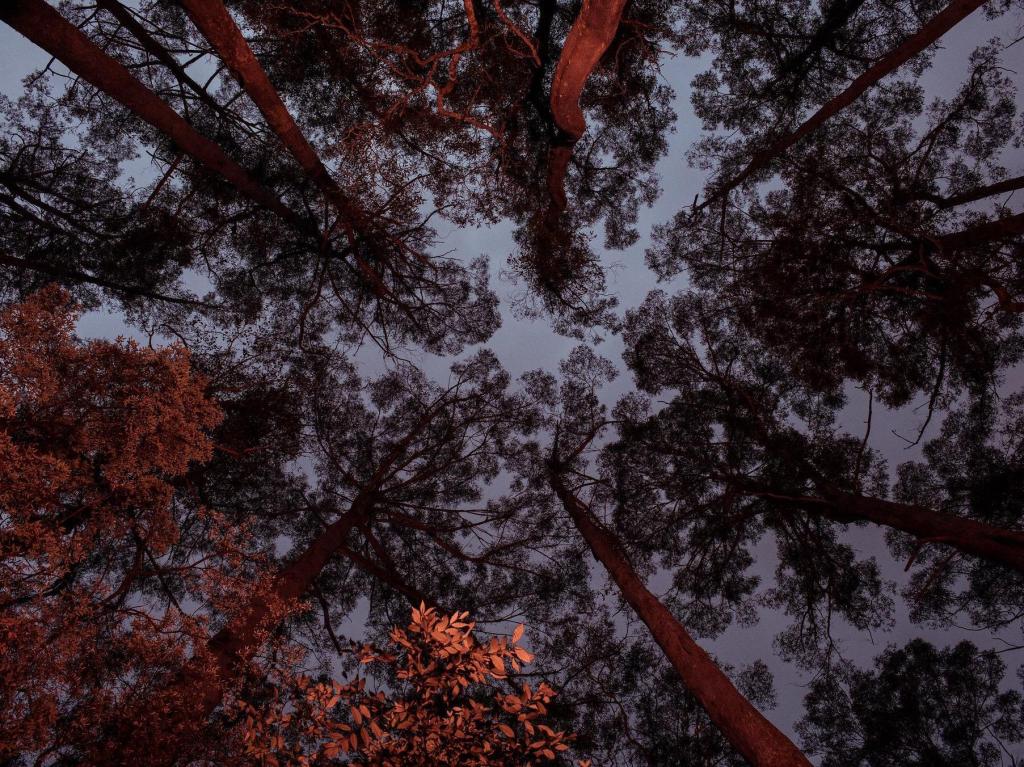 Disembarking from a bus shortly after sunset, two guides lead us down a beaten path into the Tasmanian bush. The forest is well established – eucalypts reach towards the darkening sky and fern trees wave in the breeze – but it is not ancient. As our feet clatter upon the wooden walkway that bears us across a gurgling creek, we glimpse the mossy trunks of fallen titans off to the side; ancient giants of the forest hewn down in decades past. Over time the forest has returned to reclaim its own. We are intruders here.

Our small party are ushered off the pathway and into the undergrowth, invited to sit in silence on a series of small, upturned logs beneath the boughs of the trees. Foam cushions are provided for our comfort. We sit. We wait. And then we hear the ravens coming.

Psychopomps, messengers of the gods, harbingers of war – of all birds, ravens are among the most mythologised. The Celts saw ravens as servants of the war goddess Morrigan while in North America, Raven was a god – a trickster god, both villain and hero. The Noongar people of Western Australia believe ravens ushered the spirits of the dead to Kurannup, an afterlife across the western sea. In Norse mythology ravens served Odin, god of war, wisdom and the gallows. Each morning his ravens Huginn (‘thought’) and Muninn (‘memory’) would fly out into the world, returning that evening to perch on Odin’s shoulders and croak their reports of all they had observed that day.

As well as being mainstays of myth, ravens and their fellow corvids, the crow, have also long fascinated artists, including Audubon, Poe and August Friedrich Schenck. One of the latest artists to explore the world of the raven is English musician Chris Watson, a founding member of Cabaret Voltaire.

Now working as a sound recordist specialising in natural history, Watson’s deceptively simple yet strikingly profound Hrafn: Conversations with Odin is an immersive sound work co-presented by The Wired Lab (an interdisciplinary organisation specialising in sound and site based projects) as part of Dark Mofo 2019.

The work will have a life well after the festival has ended. Hrafn: Conversations with Odin is the first work to be installed as part of Project X; a series of installations and experiences in the Huon Valley supported with funding from both state and federal governments, and designed to bring tourists back to the region after last summer’s bushfires devastated tourist infrastructure, including a major attraction, the Tahune Airwalk.

Staged in the Tasmanian bushland a 90 minute drive from Hobart, Watson’s artwork is centred around an intimate field recording of some 2000 ravens gathering at dusk to roost; a spatialised multi-channel sound installation which audiences experience as evening transitions into night.

Part of its appeal is eavesdropping on the ravens as they gather in ever-increasing numbers, cawing and gronking and perhaps grooming themselves and their pair-bonded mates. What do ravens discuss as they bed down for the night? What would they say if they saw a cluster of humans sitting quietly beneath the boughs of their trees? What might they say to a god?

As the work unspools and light drains from the sky, it becomes increasingly hard to know what is pre-recorded and what is real – can one really hear the wind in the leaves overhead, or is it all part of the installation? There’s also a meditative quality to the work that becomes increasingly pronounced over time; one’s mind slows and stills, everyday concerns forgotten, as fern trees rustle around you and unseen ravens grumble overhead. Silence falls. Night deepens. Somewhere an owl hoots and a bat twitters at the very edge of hearing.

Corvus tasmanicus, the Forest Raven, is the largest and heaviest of the Australian corvids. Hrafn: Conversations with Odin was not recorded in Australia, the knowledge of which further complicates one’s engagement with the work. Like the sounds we experience, we are aliens in this land as we sit beneath the darkening sky.

Afterwards, we return to the bus in silence. No-one speaks. All are lost in silent reverie, caught up in the magic we have just experienced.

This review of a preview performance is published with the approval of Dark Mofo. The author’s visit to Hobart was supported by Tourism Tasmania and Dark Mofo.