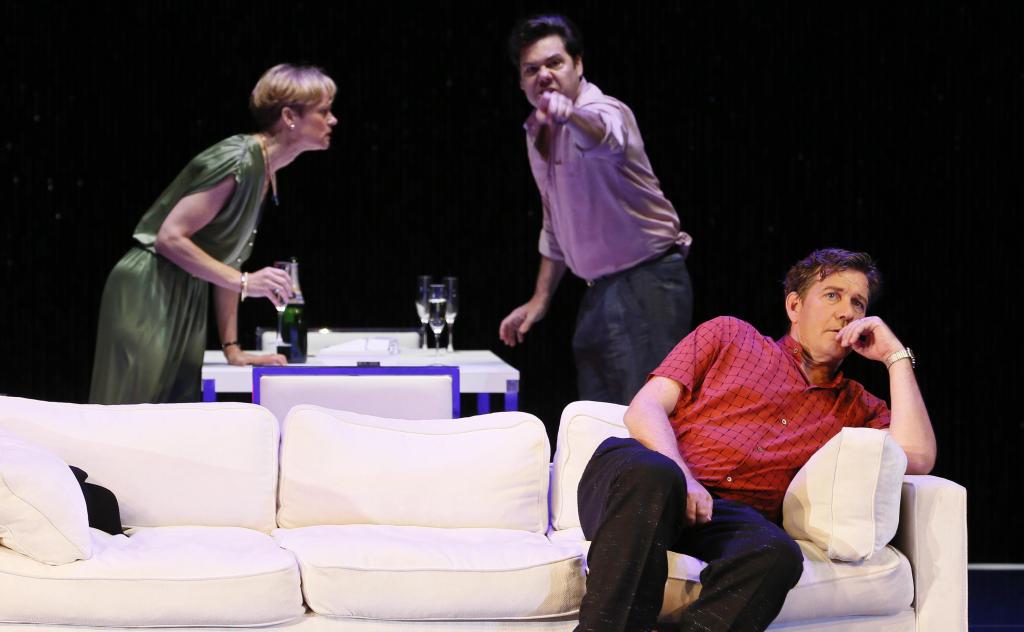 Sydney versus Melbourne. East versus West. That intellectual and cultural hub prone to four seasons in one day weather events versus the glitz and glamour of the unofficial harbourside capital city of our country. As a wise teapot once sung; it’s a ‘tale as old as time.’ And indeed, time has not withered David Williamson’s hilarious 1987 satire Emerald City which is receiving a rip-roaring revival by Melbourne Theatre Company and Queensland Theatre under the direction of Sam Strong.

This uproarious morality tale centres on middle-class married couple Colin (Jason Klarwein), an artistically successful screenwriter, and Kate (Nadine Garner), a book editor, who have recently moved from Melbourne to Sydney in order to further their careers. Colin is looking for his next big gig and after rejecting an offer from his agent Elaine (Marg Downey) he hooks up with an inexperienced soap opera co-writer called Mike (Rhys Muldoon). The unlikely duo go into production on a World War II film called Coastwatchers and disaster ensues. Careers are dashed, relationships falter and there are back-stabbings aplenty.

The themes of artistic integrity, greed, commercialism and ambition in Emerald City are still as relevant as ever and Williamson’s cracking script continues to elicit loud cackles and sniggers of cringe induced recognition from contemporary audiences. The lauded local playwright, celebrating 50 years in the industry, still has the power to hold a mirror up to Australian society and force us to deal with what we see; warts and all.

Sam Strong pulls out all the stops with this production from the casting to the design and it’s a joy to watch. The first act moves at a dizzying pace (it’s like watching a TV sitcom live on stage) and although some momentum is lost in the second half the show’s two plus hours fly by. Dale Ferguson’s set design is integral to this flow; the use of a large revolve means the action almost never stops and the epic cascading diamond bead curtains (one section of which cleverly mimics the outline of the Sydney harbour bridge) add to the appropriately glamorous cinematic style of the staging.

The cast across the board are excellent and all the performers create a heightened sense of frenzied comedy that suits the piece perfectly. Garner is ferociously fiery as Kate and Klarwein imbues the role of Colin with just enough flabbergasted neuroticism to win over the audience. Muldoon is an absolute scream as the dickhead Mike and although he says some horribly ignorant and chauvinist things this character is the one we can’t wait to see. Downey is divinely dry as Elaine, expertly wrapping her distinctive drawl around many of Williamson’s great one-liners, and she also gets to wear the best garish 1980s costumes. Megan Hind is charmingly down-to-earth as Mike’s girlfriend Helen and Ray Chong Nee is slimy and imposing as the executive bigwig Malcolm. Everyone on stage seems to be having a ball and it’s easy for the audience to sit back and go along for the ride.

Emerald City might not put to rest the never-ending battle between Melbournians and Sydneysiders, but this fun revival of one of Williamson’s greatest plays is a fitting tribute to a playwright who forever changed the way Australian’s tell stories on stage.