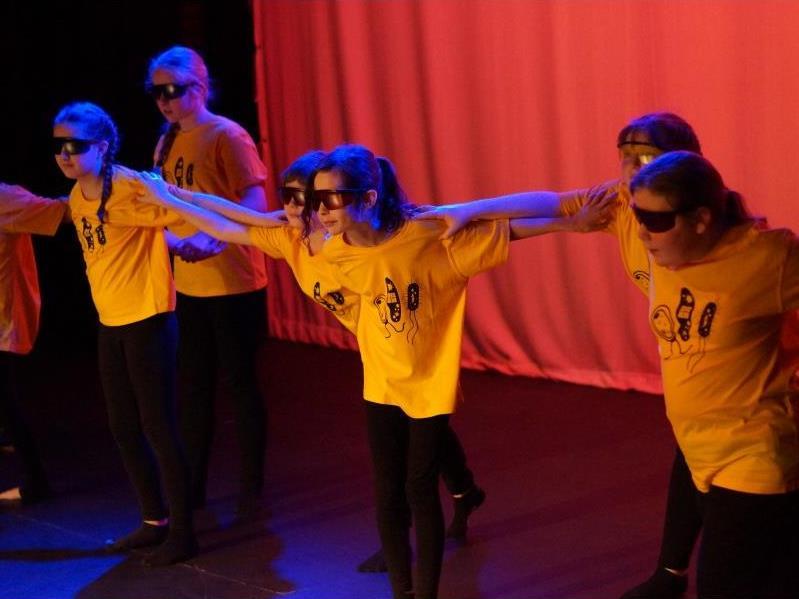 The resulting performances are fascinating in their interpretation of these scientific processes and utterly absorbing. There is nothing quite as joyous as watching a child discover a love of dance: I’m thinking of the young man in the orange t-shirt whose face lit up with pure joy every time the choreography gave him the opportunity to jump up and down wildly and fling his hands in the air.

DRILL’s artistic director Josh Lowe tells me that the collaboration resulted from a desire to make dance more accessible to everyone, and maths and science learning more appealing to young girls. The costumes chosen are deliberately gender neutral. DRILL’s residency with the schools and the workshops, led by choreographer Felicity Bott, help to break down gendered educational thinking by getting girls excited about science, and boys excited by dance. This process of kinetic or embodied learning is very successful for restless students.

The scientists have likewise been inspired by the work, particularly one who is also a dancer, and Lowe tells me that she found interesting parallels between the process of choreography and problem solving in science.

The five schools involved are all in culturally diverse and socioeconomically disadvantaged communities, where families might not be able to afford commercial dance schools. Programs like Dance Nexus provide high quality arts experiences for young people who would otherwise not have such opportunities: for Kempton Primary School, it’s the only arts activity for the entire year.

The six performances (and electrifying finale) explore the work of each scientist in abstract ways. In one, we see the heartbreaking effect of ingested plastics in albatrosses. Between furrowed looks of concentration, you can see the sadness on the faces of students as they embody in gesture the opening up of the albatross to find an array of single use plastics in its stomach.

Through this project the children involved learn to comfortably express themselves through their bodies. It’s a real attractor for those who don’t like competition or who don’t fit in. Lowe tells me DRILL focuses on the creative side of dance and as such helps shape creative, empowered thinkers.

This kind of work can’t be reviewed in the same way that a professional production would, or the same way that you would critique the polished work of DRILL’s Senior Ensemble. The aim here is different. Its measures of success lie in engagement, confidence building and sheer fun. It’s not about auditioning for the most technically perfect dancer. It’s a community work. Inclusion and celebrating mixed abilities is key.

On stage you see the kind of uncensored faces you rarely see on professional stages. Faces that diligently count on the beat, faces that laugh at themselves and keep going even though they are two moves behind, the deeply focussed looks of the young girls leading the group choreography. It’s a joy to see this kind of open lack of self-censorship. You can tell that many of them have been practising each night in front of the mirror at home and as they take a bow, you can see they’re really proud of what they’ve created.

Bott has done a great job in creating choreography that is enjoyable and explorative and which embraces a range of diverse humans and skill. Success in a project like this looks like the students love dancing and here that is abundantly clear.

I can’t wait to see the young child with the orange t-shirt again. He could grow up to be the next Josh Lowe!