A showcase of the extraordinary athleticism of Bangarra's dancers and a celebration of their rich history in this land.
Sylvie Woods 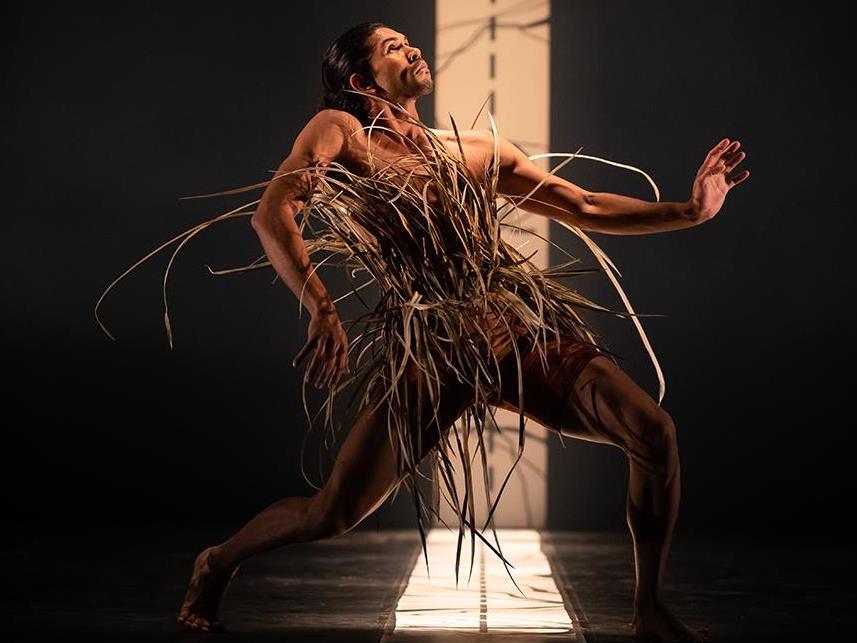 Highlights were Frances Ring’s Unaipon, based on the life of a Ngarrindjeri man of the Warrawaldi clan born in 1872, and Jiří Kylián’s homage to Aboriginal and Torres Strait Islander people and their cultures, Stamping Ground.

Unaipon is a tribute to the prolific intellect and achievements of Aboriginal philosopher, inventor and storyteller David Unaipon. While many of Unaipon’s achievements were stolen while he was alive, his image now features on the Australian $50 note, and the book he wrote while travelling through Australia, Legendary Tales of the Australian Aborigines, was finally published under his own name in 2001. In the visually thrilling sequence ‘String Games’, dancers wove between – and even wrapped themselves around – elastic stretched across the stage, creating seemingly impossible shapes and forms with it in long, liquid movements. The work involved intensely focused, measured movements. The relationship with the string embodied an aspect of acrobatic performance, a mood pursued by Costume Designer Jennifer Irwin in tight unitards of blood-red.

Stamping Ground by Jiří Kylián was put together in 1983 for the Nederlands Dans Theater after the Czech choreographer attended a gathering of Indigenous dancers on Groote Eylandt, and marks the first time Bangarra has performed a work by a non-Indigenous choreographer. A sense of self-exploration permeated these energetic performances. Much of the choreography nodded to slapstick in imploring the dancers to consider their own physicality, tapping themselves, jumping in fright, as though suddenly becoming aware of themselves. The breadth of emotion conveyed through the movement, which elicited delighted gasps from the audience, asserted the dancers involved – Tara Gower, Baden Hitchcock, Rika Hamaguchi, Ella Havelka, Tyrel Dulvarie and Ryan Pearson – as remarkably multi-dimensional artists.

A standout performer in the company is Biripi, Minang, Bulang and Baladgung man Ryan Pearson, who has danced with Bangarra since 2017. Pearson was a resplendent form to behold in Stamping Ground, to which he brought extraordinary energy and purpose.

The last leg of the triple bill, to make fire, slowed in pace, and was distinguishable from the other two parts in being plot-driven. To Make Fire was artistic director Stephen Page’s joining of various dances from the company’s past into a large arc of diverse moments, commencing with the Helpmann award-winning Mathinna, the story of one of the first stolen children. The powerful, sorrowful storyline was enhanced by the haunting soundscape by David Page: a melting pot of scattered beats, ebbing synths and classical music. A reprisal of blood-red in the costuming of protagonist Mathinna seemed a fitting representation of the acute agony the character experiences over the course of the story.

It makes sense that the fusion of thematically varied storylines, each of varying lengths and energies, would have been more accessible to returning audience members who can enjoy the ‘throwback’, however, the high-energy precedent set by the first two works made engaging with to make fire’s slower, more narrative mood difficult.

Since 1989, Bangarra has achieved eminence at home and internationally. 30 years of 65,000 years commemorates the company’s 30th year in performance, and, in theory, Indigenous Australians’ 65,000 years of continuous occupation of Australia. However, as Artistic Director Stephen Page pointed out, it’s been ‘longer than that’. Research undertaken in south-east Victoria has pointed to Aboriginal Australians occupying this land for twice as long as previously thought. (120,000 years).

This unfathomably rich history that Bangarra Dance Company represents is a cause for celebration. Artistic Director Stephen Page, a descendant of the Nunukul people and the Munaldjali clan of the Yugambeh Nation from SE Queensland, was honoured with the Australia Council Dance Award for significant contributions to the cultural and artistic fabric of the nation in 2017, and was also appointed an Officer of the Order of Australia (AO).

This commemorative triple bill by Bangarra Dance Company is joyful, beguiling and unmissable.

Sylvie Woods is an arts journo and copywriter from Sydney. Since 2017, she has been Lead Writer in NSW for CutCommon Magazine. You can read her arts journalism there, in Audrey Journal, Sydney Arts Guide, Sydney Scoop, Honi Soit, Australian Arts Review, Megaphone Oz, the BEAST Magazine and in ArtsHub. She holds a BA and a Masters in Publishing from The University of Sydney. She has a bold sartorial palette, and considers herself a micro-celebrity in Potts Point.