Robert Klippel changed the landscape of Australian sculpture, and his work continues to shift our perspectives and celebrate bold individualism.
Gina Fairley 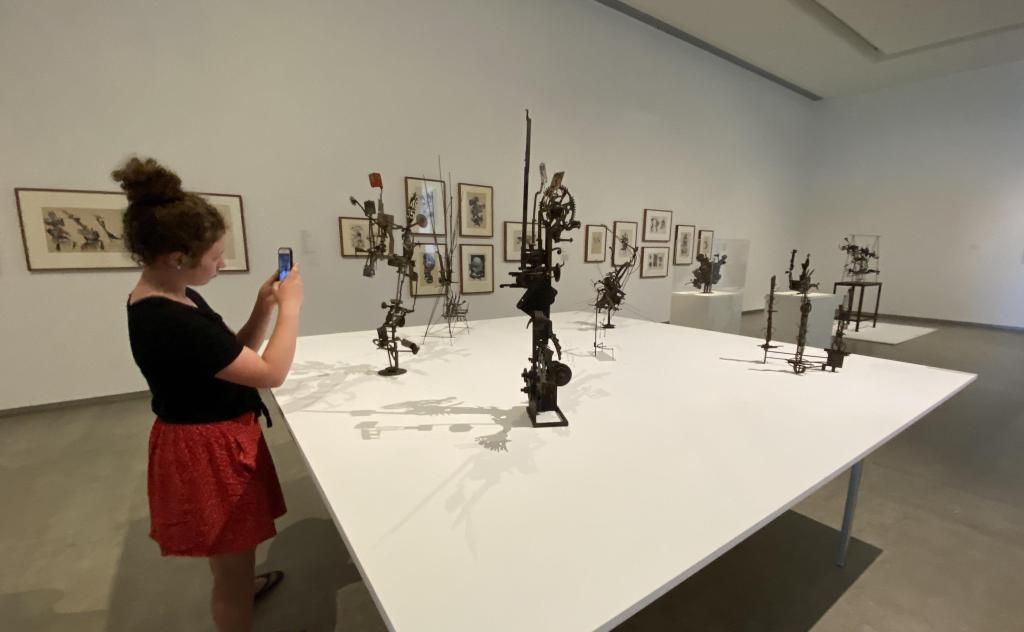 Sculptor and printmaker Robert Klippel has long been described as prolific. Presented by the TarraWarra Museum of Art and curated by Kirsty Grant, the new survey exhibition Assembled: The Art of Robert Klippel, maps his six decade career. It gives viewers a palpable sense of what it means to be prolific, allowing us to witness the honed visual drive that led Klippel to push sculpture into new heights –  new expressions.

Over a hundred works chart the career of this phenomenal artist, who could be described as the father of assemblage in Australia, and who influenced a generation of artists.

In a nutshell, Klippel was a tireless inventor – a bower bird – who seamlessly moved between using metal, found material, plastic and wood to create his iconic abstract sculptures. He was not afraid of scale – bouncing from a flotilla of petite forms created from model plane kits, for example, to industrial scale assemblages that used machine patterns. Viewing this exhibition, that is exciting to witness.

Everything I see, no matter what it is, I weigh up its sculptural possibilities.

Grant has given us an exhibition that is largely chronological, starting with Klippel’s travels to London and Paris in the late 1940s and the Surrealist-inspired sculptures and drawings that emerged from those visits. All the hallmarks are there – Klippel’s interest in volume, balance, rhythm and proportion.

The next chapter of the exhibition walks viewers through his celebrated “junk sculptures” of the 1960s and 70s, finishing with his late timber assemblages made from patterns, or casting moulds, found in an abandoned warehouse in inner Sydney.

A number of rare carved sculptures and drawings date from those early years; they are a real treat to see. One can clearly draw the connections to Henry Moore, Picasso, Eduardo Paolozzi and André Breton, who Klippel met during his travels, and yet, Klippel’s language was distinctively his own, and it is easy for viewers to track that journey.

What few know is that while Klippel had an exhibition in Paris – a well-received exhibition – when he returned to Sydney in 1950 he produced (uncharacteristically) only 18 sculptures over the next seven years.

It was a shift to assemblage in 1961, when he made his first junk sculpture, that brought his work to attention on home soil. It is hard to believe looking around this jam-packed gallery – one feels exhausted just trying to take in his creative output – that there was ever a lull, a re-calibration at play.

Perhaps it was a time of consolidation, or gestation? What followed – as this exhibition shows – was an outpouring of some of the most innovative sculpture produced in Australia, even to this day.

It is perhaps best summarised in his major work, No. 247 Metal construction, comprised of thousands of found typewriter parts formed into three projecting pillars and raised on a metal stand. It took him three years to complete (1965-68).

It was not unusual for Klippel to be working on a number of sculptures at a time – started quickly in their assemblage, then refined using magnets and floristry wire, before welding months, sometimes years, later, Grant explains.

No. 247 is presented with a number of lithographs that Klippel produced in 1965, Structures in a landscape, that connect the mechanical form of the typewriter with the landscape. He also revisited these towering forms in collages.

Looking around the central gallery, where these works are located, it is somewhat overwhelming. Take a breath; take another look – and one can start to thread the connections together. Central to the room is a large table that offers a field of smaller works, positioned at waist height for viewing and allowing the viewer to become totally absorbed in their world.

One an end wall is Klippel’s photomontage, Philadelphia (1978-79), the largest collage he ever made and intended as a major statement within his graphic oeuvre. Shown alongside a number of smaller collages and sculptures, it highlights the movement between the monumental and the miniature in his practice.

We see it again with No.1118 (1995), 87 small sculptures protected under a plexiglass case and made from objects including tea strainers, toys and champagne cork wires, subsequently formed into tiny abstract sculptures and then painted. No one object exceeds 15 centimeters.

It is an incredible segue to Klippel’s later timber works that demonstrate a pendulum swing in scale.

Looking out over the grounds of TarraWarra’s vineyards is a suite of Klippel’s large timber assemblages that stand with a bodily presence in the space. This marks the moment that Klippel returned to wood.

He had been commissioned by the National Gallery of Australia in 1980 to produce a series of outdoor bronze sculptures, the catalyst for Klippel to pull out some old engineering patterns he had found years earlier with fellow artist Colin Lanceley.

Distinctive in their red, black and yellow – and wearing the scars and patina of a past life – these works have an incredible presence. The largest of the group, No 712 The Train (1987), joins the exhibition from a private collection.

It is like the exclamation mark of a career.

When Klippel died in 2001 (1920-2001), he was hailed as Australia’s most significant sculptor. Viewing this exhibition, we know why. This is a beautifully presented show – a must see!