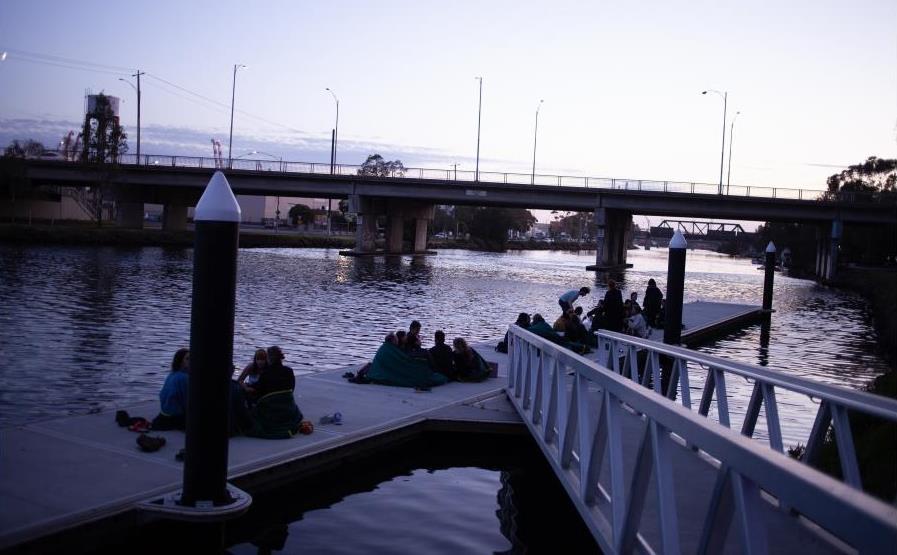 ‘It’s high tide,’ a volunteer commented as she led the group to the Maribyrnong River from Footscray Community Arts Centre. Behind us were the centre’s expansive lawn and bluestone buildings; across the river, docklands, joined by an active train bridge. On the riverbank, the group met Jack Mitchell and Alec Reade, the producers of Resistance Transmission, a ten-night event using deep listening to explore relationships with water, running as part of Due West Festival.

The group was then directed to an outdoor amphitheatre, with the night’s speakers and musicians sitting around a fire in the centre. With each night of Resistance Transmission offering something different, Sunday night’s iteration, Riverside Yarns, gave an opportunity to listen to three individuals’ tales on their relationships with Australia and Melbourne’s Western suburbs waterways.

Uncle Larry Walsh opened with a Welcome to Country, concluding, ‘We all have elders – and I pay my respect to yours.’ Following him, the Orbweavers performed a nostalgic acoustic number about growing up around Melbourne’s rivers, with tears in lead vocalist Marita Dyson’s eyes.

Then the storytelling started with Peter Haffenden exploring his upbringing in Footscray. ‘I love gentrification,’ he mused on how the suburb on the Maribyrnong River evolved from ‘dangerous’ to ‘groovy.’ Uncle Larry explored his decades in the area, from his teenage romances in the river’s grass fields (‘The river was my pick-up buddy’) to his initiatives acknowledging the area’s Indigenous heritage. Author Maya Ward spoke on walking the length of the Yarra to its source – an Indigenous walkway 50 times older than any Roman road.

With a sunset, woodfire and glimpses of seagulls and possums, Resistance Transmission: Riverside Yarns had an intimate aura. In this ambient setting, the speakers spoke candidly and introspectively. Using the environment as a central connector, their stories denoted how sharing personal reflections can engage community in exploring larger ideas of heritage, landscape and science. In particular, Uncle Larry, one of Melbourne’s only senior Elders focussing on storytelling, generously demonstrated how Indigenous oral traditions can prompt social connection with land.

The impact of this, however, was somewhat lost through inefficient production. The noise of trains, cranes and other Due West festivities made it difficult to hear. The speakers seemed to lack awareness of talking times, with one speaking for 5 minutes before apologising for going too long while another spoke for at least 40 minutes. Lack of structure meant the event not only dragged but ran 30 minutes over, and then was cut off, unfinished, with the advertised Talanoa (a circular discussion with audience participants directed by knowledge holders/Elders) over a hot cup of tea not eventuating.

A gap persisted between speakers and audience. The stories were, at times, opaque. Other than Ward, the speakers offered broad reflections rather than recalling specific events or experiences, with the narratives slowly emerging through random anecdotes and interesting details. This isn’t the fault of the speakers – memory is foggy and personal reflection is convoluted. Yet, while the event was based on deep listening, even a sensitive listener would struggle to interpret the loose conversation with little context on the speakers’ backgrounds. More guidance or preparation from production would have gone a long way in building a connection and making the event more accessible.

As an audience member, Resistance Transmission lacked a centre of gravity; its relaxed production making something promising fall flat. An enhanced directional structure could have drawn out the beauty and impact bubbling underneath.

Presented as part of Due West Festival