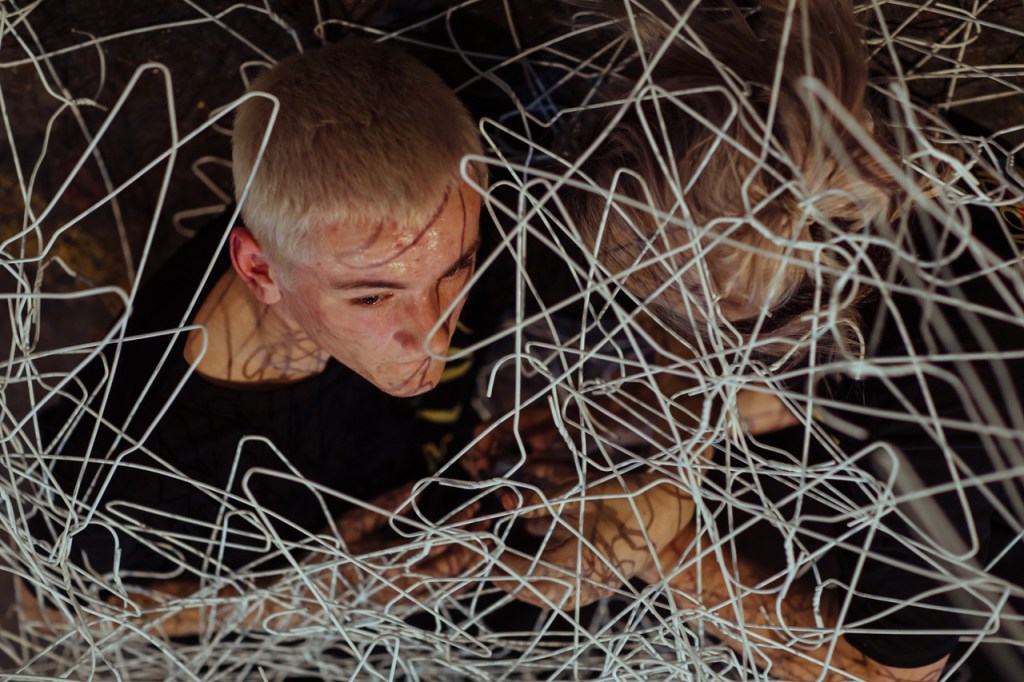 Rival Planes: ‘A great bird’s nest of hangers is formed and carried aloft: it looks impossibly heavy, but the brain knows it is light.’ Photo supplied.

On earth, Midnight Oil thrilled, a town-hall full of organs deafened, art delighted and installations (mostly) baffled, while above vibrant green city-wide lasers streaked the night sky of Hobart like a man-made aurora – we are talking about 2022 Mona Foma.

By chance, Mona Foma rolled round as I was reading The Man who Tasted Words by neurologist Guy Leschziner. Our five senses are agents of both perception and deception, and the book calls into question our experience of reality. Near the end of the book, Leschziner points out that, ‘the way we experience the world is reliant upon the chemical and physical properties of our bodies (…) as much as on the physical properties of objects’.

What is reality?, MoFo asked. Is it the feather-light coathanger with its steely strength? The brutal, bruising brick that dances through the air? The musical note that is green, the chord that is blue, the supernal music conjured in the basest circumstances? A paradox, certainly. And a wonder.

Reality in Rival Planes (produced by Stompin) arrives courtesy of a vast number of white coathangers. Two young dancers explore their weight, strength, tensile properties and cobweb-like adhesion. A tangle of hangers is dragged apart: the stress of their final breaking is tense. A great bird’s nest of hangers is formed and carried aloft: it looks impossibly heavy, but the brain knows it is light. A bundle of hangers, tight and tough like handcuffs, like chains, dissolves in an inconsequential flutter. What is reality?

Sage Price and Jesper Harrison perform the dance work. They also conceived it, choreographed it, and made the costumes: they are an accomplished pair of emerging artists.

Particularly worthy of mention is their confident interaction with the audience. ‘Audience participation’ can be touch-and-go in even the most familiar and controlled circumstances: here it is inserted into an abstract contemporary dance piece, with no verbal or overtly signed instructions, and the development of the piece is in several places dependent on the involvement of audience members.

It’s a beautiful thing to witness the trust these young performers place in their audience – and the confidence they have in themselves – and the way this trust is exercised by their highly appreciative audience.

The work is intelligently thought through, finely executed, and was very warmly received.

Somewhat similar in the ground it covers is Fertile Ground, created and performed by Ashleigh Musk and Michael Smith, who were the mentors on Rival Planes. Here the dancers, again with some involvement of audience members, interact with a brutalist pile of concrete besser-blocks.

The scraping, brittle inflexibility of the blocks contrasted dramatically with the sinuous ease of the dancers’ bodies, even when still. Whether serpent or statue, the flesh with its subtle, supple, shifting, breathing, pulsing, sweating, dripping liveness suggested silk and marble and never the unyielding unresponsiveness of solid concrete.

Yet how light those blocks looked in the hands of the dancers, flung out and whirling, dervish-like; how tender as the dancers crawled their way across them toward each other. What is reality?

Abandoning their concrete burdens in the final section, the dancers partnered in a dance of fluid equilibrium, limbs rippling, bodies grazing, rising, falling, finally, fluidly, rolling away. Filthy, sweaty, wracked and bruised, one admired the sheer hard work of Musk and Smith as much as their artistry.

Quartet for the End of Time

In Leschziner’s book, there is a man, Paul, who feels no pain. This may sound attractive, but is of course hazardous, for pain is a necessary danger signal; and the experience of physical pain is also a universal, and experience we all share – except Paul.

French composer Olivier Messiaen also had a sensory ‘disruption’, though more benign. His synesthesia allowed him to see colours when he heard sounds.

Paul’s and Messiaen’s realities are very different to mine and, I imagine, yours. And where Paul has no experience of pain, Messiaen’s was searing. Written while he was interned in a German prisoner-of-war camp in 1940, Messiaen’s Quartet for the End of Time premiered in January 1941 at Stalag VII-A. Messiaen himself was at the piano, with fellow prisoners completing the quartet of violin, cello, and clarinet.

Messiaen described the work as ‘transcendental’, and it does indeed transcend the pain-filled circumstances of its nativity. This is music of sublimity created in the midst of desolation.

The work offers each member of the quartet generous opportunity to shine, and they did. The work features a long clarinet solo. Derek Grice brought a brilliant range of colour to its long sustained notes, exhibiting both masterly technical control and exquisite sensitivity.

I found myself holding my breath through the long-breathed phrases of the cello (James Anderson) in Louange a l’eternite de Jesus, and again for the sheer intensity of the phrasing of the violin (Emily Shepperd) in the final movement.

Having previously performed much of Messiaen’s piano repertoire, including his two-hour Vingts Regards from memory, Michael Kieran Harvey (piano) brought all that knowledge and love of Messiaen to this offering, performing from the heart.

At once edge-of-your-seat enlivening and hold-your-breath heart-stopping – thrilling and paralysing – this was an extraordinary experience.