While some of the tropes of youth theatre in the piece are familiar, they’re presented with freshness and truth.
Kyle Walmsley
[This is archived content and may not display in the originally intended format.] 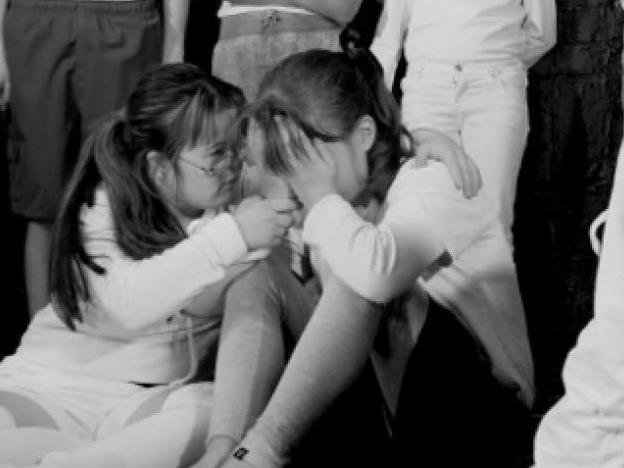 Out of Line, part of ATYP’s cameo season, is a remount of an existing work by the Bodylines Ensemble – Carlton’s Shopfront Arts accessibility ensemble.

Anyone who has worked to produce something with a diverse mix of community members knows all too well the daunting yet thrilling task at hand. Full of constant threats of failure, constantly adapting a process to best suit the needs of the participants and trying to translate what is usually an incredibly beneficial process to something that can have an appeal for an audience. It can be like herding cats – but if cats had opinions, individual needs, and differing abilities that all need to be taken into consideration. That said, just getting a group of young artists together in one place working together creatively is an achievement worth celebrating. Out of Line has managed to do this not once, but twice now, and the results make for an interesting and thoughtful night out at the theatre.

Directed by Margot Politis, this production is staged at the ATYP’s Sydney Wharf Studio which is a charming space; a little rough around the edges but we’re all the more drawn into it because of this.

The design for the piece is clean and sterile. Emma Lockhart-Wilson’s lighting complements this nicely, helping to build the drama from scene to scene, as vibrant colours guide us through a series of contrasting spaces and places.

The story is one of oppression and rebellion, upheaval and revolution. At times reflective of our contemporary school-yards and, at others, a larger commentary on societal structure and the ruling classes – both situations ​have their fair share of tyrants and ruthlessness.

The menacing grey-suited booted rulers enforce rules and punish those who do not conform to their aggressive and fastidious order. The white hoodie wearing Rebels challenge this but are quickly shaken but into line. We see this greater circle of oppression continue as the Rebels take their own frustration out on the lowest in the pecking order: the Robot Students. We see some great partner work through a fight sequence between these groups.

Out of Line uses large projections that capture our attention and punctuate the live action and story well. The small filmed vignettes capture the up close and personal world of oppression and disciplinarian rule of the piece, and we have Nicola Frew, with Hassan Reda and Hassan Gacham to thank for this.

The sound design by Michael Moebus, with Matthew Massaria and Hanning Zhang is rhythmic and energizing. It works as an effective glue keeping the energy and the momentum of the show moving forward as we bounce from section to section.

The movement is largely gestural, the choreography is tight and the ensemble work really well together. There’s an enjoyment that comes from watching performers at ease with what they’re performing. For the times when the technical execution of the choreography is less than sharp, this is forgiven through the sheer enjoyment and pleasure taken by the performers; a pleasure the audience shares in watching people hit their sweet spot of challenge and skill.

It is one thing to be able to get young performers to mimic or learn movements or dialogue that are imposed upon them. It is another and an entirely different effect to see the young people in this show embody that movement and expression that they have created, giving life to it through their ownership. One such example of this ownership is with solo performer Jessie Chapman – it’s focused work, full of power and executed brilliantly.

And there are many more – the content has been shaped and formed through the input of the students which gives the piece a fun, unexpected and surprisingly poetic quality to its abstract tone. Appearances by a confident pirate amongst an otherwise completely plain clothed stage, for example, make for punchy moments of comedy. While some of the tropes of youth theatre in the piece are familiar, they’re presented with freshness and truth.

A huge congratulations to Margot Politis, the BodyLines ensemble and Shopfront Arts for giving time and energy to remounting a work – such a rare opportunity in the world of Community Arts. And a timely reminder for us all to always challenge, test and sometimes break the rules. I look forward to seeing more work from Politis and Shopfront in the future.