MALTHOUSE: Theatre at its most moving, storytelling at its best; this Big hART production is the must-see show of the year.
Richard Watts 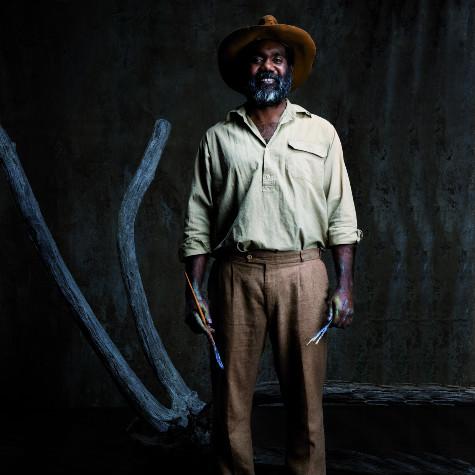 I am accustomed, at the theatre, to occasionally wiping away tears. I am not used to being so moved by a production that I have to struggle to stop myself breaking down completely and bawling my eyes out in a snotty, sobbing mess at its conclusion.

Big hART’s account of the life of celebrated and betrayed artist Albert Namatjira left me reeling.

The basic story of Albert (Elea) Namatjira is relatively well known: the Western Arrernte man whose exquisite watercolours taught white Australians to look at their country in an entirely new way, and the first Australian Aboriginal to be granted citizenship. In 1958 he was sentenced to six months jail for supplying alcohol to members of his extended family. After a public outcry, and two appeals, the sentence was reduced to three months. Namatjira finally served two months of ‘open’ detention at the Papunya settlement in March-May 1959. Three months later he died at Alice Springs Hospital, aged just 57.

Written and directed by Scott Rankin, Namatjira was developed in close consultation with the Namatjira family, many of whom continue to be involved in the production as it is performed, bearing witness to the story and drawing their country on the set, a giant blackboard portraying the mountains, trees and plains of Namatjira’s home. It’s a beautiful touch, ensuring an authenticity that most biographical theatre works could only dream of. The other key element of the set is a striking wooden structure, its soft lines evoking the weathered strata of sandstone and shale, which sits in the centre of the stage.

Equally important to the production is Genevieve Lacey’s haunting live score (played on a variety of instruments, including a gorgeous, sonorous contrabass recorder) and Jim Atkins’ sound design, enriched by the vocal talents of the performers as they sing in English and Aranda. And oh what performers they are.

As Namatjira, and a variety of other roles including the war veteran Rex Battarbee who first taught Namatjira to paint, the charismatic Trevor Jamieson is a revelation. Cheeky, playful, dignified and solemn, he switches effortlessly from character to character, displaying a deft physicality and a beautiful voice, as well as an electrifying stage presence; a bravura performance. He is ably supported by Derik Lynch, also playing a number of characters, including most memorably the young Queen Elizabeth II. Lynch demonstrates wonderful comic timing, though his playful roles become a trifle repetitive in the second half of the show; one of the only flaws in this otherwise excellent production.

As the details of Namatjira’s life unfolds on stage – his birth and family life, his missionary school education, the impact of his growing fame, and the ugly truth behind the government’s decision to award him citizenship – the audience finds themselves laughing one moment, and gasping in genuine shock a minute later as the racism of the day is bluntly revealed – most confrontingly in a voiceover taken from a newsreel detailing Namatjira’s visit to meet the Queen in 1954.

Featuring a memorable explanation of the importance of the sacred to Indigenous communities, expressed in terms white Australians can understand; and a laudable expression of hope for a better Australia (“Not this one, the one we’ve found ourselves sliding into…”) Rankin’s script is subtle, remarkable, nuanced and detailed, and is supported by an impressively realised and finely tuned production.

Namatjira is a magnificent theatrical achievement; a marvellous, deeply moving, incredibly human story of triumph and tragedy, and my current contender for the mainstage show of the year.