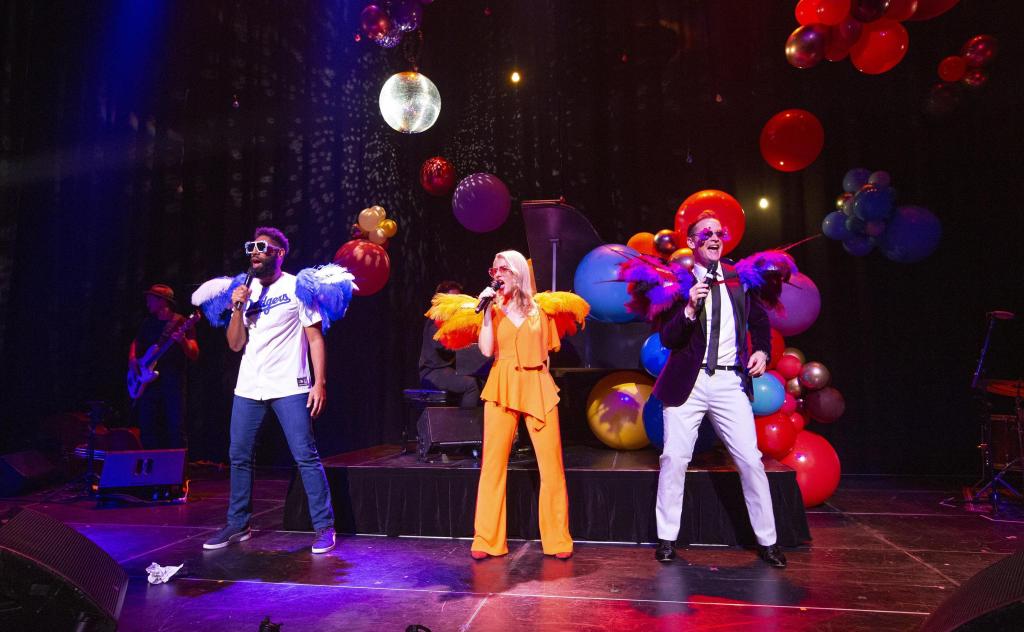 Arriving on the Brisbane theatre scene in 2012 with a mission to develop new Australian cabaret theatre and, over the past 9 years, The Little Red Company has created a number of critically-acclaimed shows.

Presented at the newly opened Judith Wright Centre, where the highly successful Rumour Has It was first staged in 2012, their latest offering, Your Song, celebrates the marvellous songbook and music of the legendary Elton John.  Far removed from being a standard Tribute show, the cast quickly pointed out that no-one attempts to play the role of Elton John, even if they collectively sing most of his famous songs.

Instead, creators Adam Brunes and Naomi Price have carefully and lovingly woven a powerful story around the music and lyrics created by Elton John and Bernie Taupin by using a number of real-life stories, memories and anecdotes of people who were both moved or influenced by the music at the time, some as children.

They have contextualised the songs through these personal experiences, some immensely funny or dramatic, some heart-warming even sad or heart-breaking, but all given relevance through a reimagining of the songs in a personal context. A case in point was the death of Princess Diana where Elton John rewrote Candle in the Wind about Marilyn Munroe to reflect on the life and death of the Princess and famously sang this beautiful song at her funeral.

Your Song A production by The Little Red Company. Pictured L-R Andy Cook, Marcus Corowa. Image by Stephanie Do Rozario.

The song and its context were poignantly presented by the cast, with snippets of wide-ranging reminiscences and memories from those interviewed. This seemed to strike a strong chord with a hushed audience, many of whom may have their own vivid recollections of that fateful day. It was a wonderful theatrical device, making the show even more personal and relevant for contributors and audiences alike. Additionally, the songs have been re-imagined musically as required with some excellent new arrangements by Maitlohn Drew, Alex Van den Broek and the cast to bring us a powerful and thought-provoking show.

Taking on her first directorial role with the Little Red Company, where she is both Artistic Director and co-founder, the talented Naomi Price has delivered Your Song as a fast-paced, slick cabaret brimming with a range of human emotions, including humour, joy, sadness and reflection as the songbook demonstrates. A simple set with a festoon of light bulbs and balloons, the band positioned centrally upstage, allowed minimal space for staging but it was used imaginatively for the cast who moved seamlessly from song to song, story to story.

The four-member cast of Andy Cook, Marcus Corowa, Luke Kennedy and Irena Lysiuk, all established music theatre performers, sang both as a group, in duets or solos, or as a backing band. Their harmonies were first-rate and their musicianship impressive.

They also played instruments and, as actors, kept the action moving by telling the stories through the personal accounts and memories of those documented. This was a wonderful cast of powerful, highly skilled, committed musicians and singers, who worked extremely hard throughout the 90 minutes of the show.

There were many memorable moments but it is worth mentioning just a few. Luke Kennedy’s story and subsequent haunting rendition of Daniel and Marcus Corowa’s powerful I Guess That’s Why They Call It the Blues. Jointly they performed an incredible harmonised Rocket Man.

‘This was a wonderful cast of powerful, highly skilled, committed musicians and singers, who worked extremely hard throughout the 90 minutes of the show.’

Irena Lysiuk’s ukulele playing and amazing singing in This Is My Song and her subsequent rolling-skating bride in Tiny Dancer were exceptional, as was the moving Sorry Seems to Be the Hardest Word.  And, apart from Candle in the Wind, Andy Cook gave us a heart-wrenching Goodbye Yellow Brick Road and a fabulous fun Crocodile Rock.

Special mention should also be made of the atmospheric lighting design from Jason Glenwright that enlivened the stage and the truly excellent sound design by Jamie Taylor, allowing crystal-clear diction from each singer.

All in all, this was a wonderful fun-filled and joyous celebration of Elton John’s extraordinary body of work, made more pertinent by personal stories, and delivered with aplomb by a phenomenally talented group of singers and musicians. Playing until May 1st, there are another 8 performances and it should certainly not be missed.