It’s Not for Everyone

Circus, commedia dell’arte and performance art collide in this masterwork from Australian circus company, Acrobat.
Katie Lavers
[This is archived content and may not display in the originally intended format.] 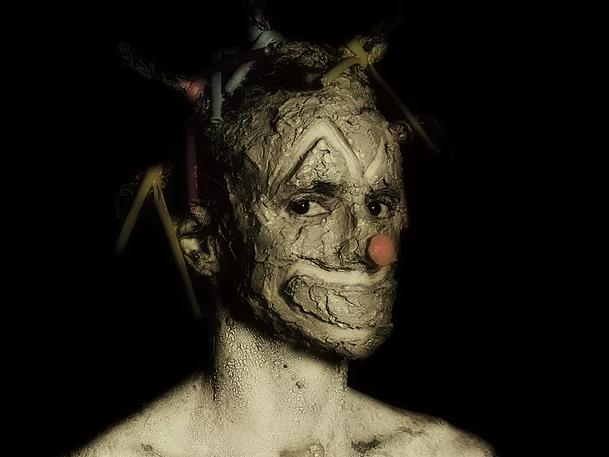 Image: Acrobat’s It’s Not for Everyone. Photo (c) Karen Donnelly.

It’s Not for Everyone, the latest work from Acrobat currently showing in the Sydney Festival, is a boundary-crossing, genre-defying work that marks out this Australian circus company as a unique and important voice in physical performance. This show serves as a reminder that Acrobat’s two performers and co-creators, Jo-Ann Lancaster and Simon Yates, have been pushing the boundaries and creating innovative circus work for over 20 years.

It’s Not for Everyone brings the extreme physicality of these highly skilled circus artists together with an uncompromising approach to artistic risk-taking to create a work of ground-breaking originality.

‘Old acrobats become clowns’ is the starting point of the work. We see two performers enter in character as aging clowns dressed in brightly coloured costumes with Lancaster sporting a curly red clown wig and pushing a shopping trolley. Strings of brightly coloured lights pick out the shape of the traditional small family circus tent and the two artists perform a traditional trick-cycling act together.

As the show progresses, however, the sense of circus tradition begins to unravel. Banners and props disintegrate during the acts, and the skills of the acrobats are shown to be failing and disintegrating. The clown costumes are gradually removed and we are presented with the performers’ almost naked bodies. The colour palette of the show turns to black and white with the colours of the artists’ flesh and of clay interspersed with the blackness of the space. Traditional circus acts while still referenced become less recognisable and coherent. An aerial act referencing a traditional rope act becomes increasingly macabre as Lancaster’s apparently inert body is suspended and turned by her partner – becoming a bizarre take on the obsessive, driven focus necessary to continue to perform circus.

It’s Not for Everyone actively rejects linear narrative. The show jumps between different images that in turn disintegrate, break apart, and then lurch into other sections. Traditional notions of seamless staging are rejected, and a stuttering rhythm of darkness and light, and of sound and silence, emerges as a major visual and aural dynamic as the performers walk to the front or the side of the stage to operate the lights or change the sound. Darkness and silence on stage become metaphors for ‘not-knowing’ – opening up space in the performance structure for thought and questioning.

A meta-structure however moves through the performance as an arc from birth through to death. At the beginning of the show, in a clowning routine featuring a balloon, the male performer Yates gives birth aided by the clown midwife Lancaster. The show moves from this birth at the beginning, to a middle section which engages with strong critiques of societal gender norms; the fetishisation of self-commodification through selfies; and then explores the sex drive and the shared rhythmic patterning of daily life experienced in long-term relationships.

It’s Not for Everyone is an uncompromising look at the human condition. The work confronts the mutability of the flesh, alongside disintegration and death. Yet this show is also darkly funny and, at times, mesmerisingly beautiful, in particular when Lancaster and Yates perform a slow motion adagio sequence – a kind of wrestling in clay – that references both Butoh and performance art.

The consummate skill of these two circus performers allows them to approach taboo areas through a form of  physical clowning reminiscent of the best commedia dell’arte, bringing to mind some of the most wildly taboo-breaking, hilarious, obscene and profoundly moving performances of commedia dell’arte performers such as Dario Fo and Daniele Finzi Pasca.

This show becomes an extended meditation on the gradual disintegration of everything including the body (also on the human condition of being aware of this disintegration) and the progression towards death. If that sounds dark and even bleak, it is, but at the same time – like the best clowning and commedia dell’arte – it is obscene, funny, visceral, shocking, and moving.

In It’s Not for Everyone little text is used and when it is used it consists of fragmented phrases for the most part spoken by Yates which interact to create layers of sound within the strong and evocative sound score from Tim Barrass.

It is the bodies of Acrobat’s extraordinary performers that bypass words to communicate directly a potent physical poetry.