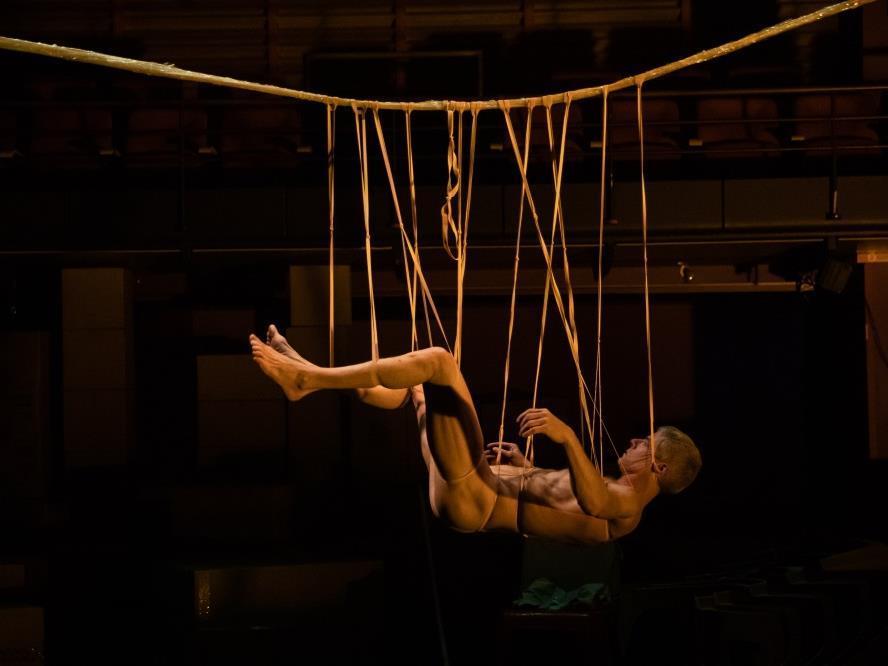 High Performance Packing Tape was devised on the back of a shopping trip to Bunnings, some dumpster diving, and assembling a few household bits and bobs. Performer Lee Wilson used to work in a supermarket, moving around cardboard boxes and packing them up. This show takes the same kind of boxes, along with other everyday objects such as packing tape and elastic bands, and blends them with physical theatre, turning them into a dramatic performance.

The show, thrust together by Wilson and the collaborating artists of Branch Nebula over a 20-hour workshop in an old warehouse, is a series of experimental stunts testing the limits of the household stuff. Can a tightrope made from packing tape hold a man’s weight? What will happen if you keep blowing a balloon up and don’t stop? If you stack cardboard boxes as high as you can reach, what will happen when you try to climb to the top?

Lee says ‘We didn’t set out to do a show, just to do this thing. We wanted to see where these crazy experiments could go in a performance sense.’ The result feels like watching a 7-year-old boy playing with a box of matches: you know it will end in tears, and you really want to take the box off him, but you are kind of intrigued to see just what will happen when he strikes a match.

The performance, originally commissioned by Performance Space, is part of Sydney Opera House’s UnWrapped season which promises ‘short, smart and surprising’ work from independent artists and small companies from Australia. The set is minimalist. A rope hangs from the ceiling, metal poles lean against cylinder drums, packing boxes are stacked at the back on an industrial backdrop. The sound design by Phil Downing uses microphones to record the on-stage action at close range. The resulting recordings are then looped into a soundtrack which is played back over the action, creating an ominously industrial backdrop to the action in an imaginative and inventive way.

Helpmann Award-winning physical theatre company Branch Nebula has a history of site-specific installations and performance, and this performance feels as though it may perhaps have worked better if it had been staged somewhere where it was less constrained. In an enclosed theatre, with plush red-velvet seating, the show feels muffled, and a little contrived. There is no narrative linking the stunts and so the action feels disconnected. A smoke machine is randomly set off; a strobe light highlights the performer thrashing around the stage dressed in a packing tape suit and whipping the stage with a metal measuring tape.

Lee handles the physical side of the performance well. He makes walking across a highwire made from packing tape seem easy. But the performance lacks the surprise and excitement you expect from physical theatre. By the time each of the series of skits and stunts is set up, we’ve guessed what will happen next and so it feels like an anti-climax when the inevitable denouement happens.

The show was put together after conducting a series of experiments to test the materials used and what it was physically possible to do with them. You get the feeling that that the performance would have felt more risky, and therefore perhaps more exciting, if some of this original discovery had been included in the final product.