Performances are excellent, but the spectacle overwhelms the drama in this extravagant staging of Bizet's famous opera.
Jennie Sharpe 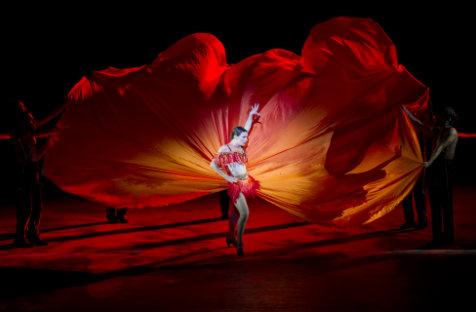 It’s back! On the water beside Lady Macquarie’s Chair, letters nine metres high spell out ‘CARMEN’ for all the world to see, proclaiming a second season of Handa Opera on Sydney Harbour.

Once again, VIPs strolled down the red carpet for the glamorous Opening Night yet, once again, the reality didn’t quite live up to the hype. A big cast, a big stage, some big fireworks and a big harbour make a big spectacle but, well, that’s about it.

Of course, this is still Opera Australia, so the singing and the orchestra were, as usual, more than up to scratch. And Bizet’s Carmen is Bizet’s Carmen no matter where it’s performed – rightly the most famous opera in the world, with some of the best tunes and certainly the best main character.

Israeli mezzo-soprano Rinat Shaham has been touring the world playing that character for what must feel like forever. It’s nine years since she premiered at Glyndebourne and since then she’s been in constant demand as the ‘quintessential’ Carmen.

No doubt she is pleased to have a chance to perform the role in a production with such a unique twist. Her performance certainly doesn’t lack freshness. From start to finish she is hotter than the requisite Opera on the Harbour fireworks. Vocally, she revels in every shift of tone colour, her voice redolent of the reds, oranges and ochres of Spain.

As the shy, lovelorn soldier driven mad with jealousy, Ukrainian tenor Dmytro Popov is the perfect opposite to Shaham’s gypsy femme fatale. His sensitive, tender voice opens to great expanse, challenging the sound system, which is, once again, found a little wanting in the male principals’ big numbers.

Australian baritone Andrew Jones likewise tests the limits and wins the girl as the toreador, Escamillo. In this production, loosely set in Franco’s Spain, costume designer Julie Lynch pulls out all the 1950’s glamour stops. Jones is a very camp, Elvis-style toreador – possibly not quite the man for Carmen, but certainly suited to this oversized production.

It’s a little paradoxical that the most effective moment in such a production comes at the end of Act I, when Carmen and Don Jose are alone on the empty expanse of the stage, and we can forget where we are and become entangled in Carmen’s web.

At most other moments, however, it is impossible not to feel a little put off by director Gale Edwards’ overwhelming desire to create a spectacle. Why did set designer Brian Thompson feel the need to lift a giant tank and a giant truck onto the stage with giant cranes, like a boy playing with toys? Why were the gypsy girls decked out in gaudy, only vaguely flamenco-inspired, costumes completely unrelated to the 1950’s costumes worn by every other member of the cast? Why did the chorus stand stiffly on stage waving flags like Olympians at an opening ceremony in Act IV?

In the face of such questions, all you can do is sit back and go along for the ride, enjoying some pretty good dance numbers from choreographer Kelley Abbey, and some excellent work by stand-out cast members Nicole Carr (in sweet voice as Micaela) and Ariya Sawadivong, Tania Ferris, Luke Gabbedy and Sam Roberts-Smith’s fast-paced five-hander with Shaham in Act II.

Jennie Sharpe is a poet, freelance writer and editor. She has published a collection of poetry in the book Australia: Facing the South and is also a novelist and short story writer. Jennie studied literature and theatre and is a classically trained musician. She is passionate about film, theatre, opera and visual art and is currently a sub-editor and contributor for French Provincial magazine.