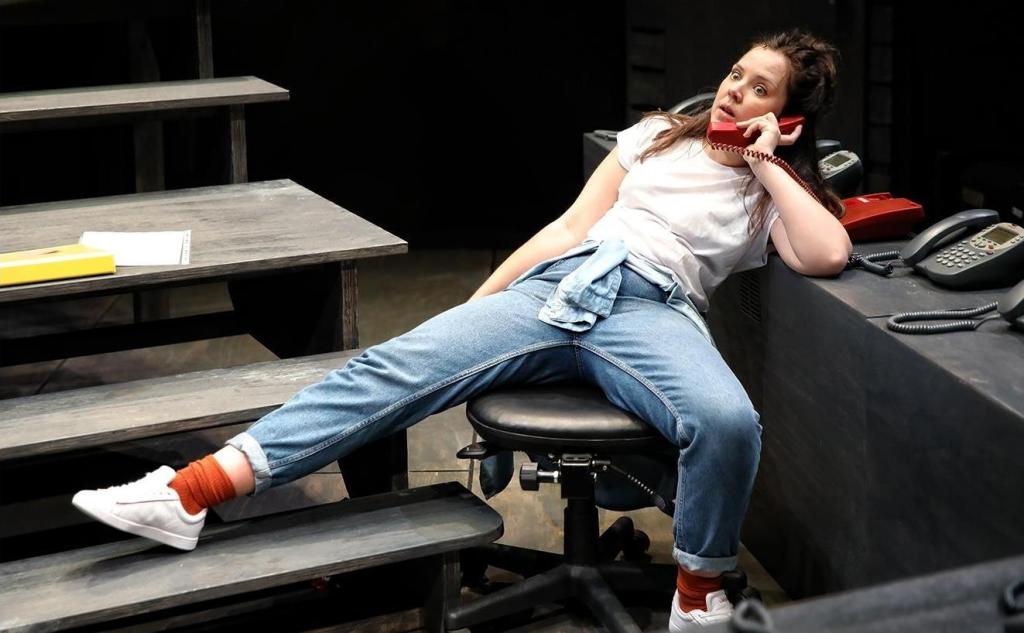 Seamlessly directed by Kate Champion at a mostly breathless pace, Contessa Treffone gives a bravura, powerhouse performance as Sam, a reservations clerk at a top swanky restaurant which is booked out (‘ fully committed’) months in advance.

Having worked in manic call centres myself, I can sure empathise with what Sam is going through. She has a horrendous day. Sam is an actor in between roles and is anxiously awaiting news about her audition. She arrives at the restaurant to find that her colleagues haven’t turned up and she has to juggle the finicky, narcissistic, petulant celebrity chef (one of his creations is ‘smoked cuttlefish risotto in a cloud of dry ice infused with pipe tobacco’), his assistants, the maître d’, the haughty receptionist at her agent’s office, and the VIPs who absolutely have to have a table for tonight … for starters.

Among other things, she also has to deal with the unexpected appearance of celebrity chef Heston Blumenthal, organise the convoluted special requirements demanded by Gwyneth Paltrow’s personal assistant for this weekend’s vegan banquet for 15, placate an angry magazine editor, and clean up after a disgusting occurrence in the amenities.

In this production, Becky Mode’s play has been transposed and adapted to Sydney (rather than the original New York setting) with celebrity name drops such as Leigh Sales and Thomas Keneally. It also acknowledges the trend towards molecular gastronomy and the popularity of shows like Master Chef, and there are some great theatre in-jokes.

The set is a black, dingy basement: there are stairs leading to a huge bank of phones and a special red one for the temperamental chef, as well as an intercom. Casually dressed, Sam dashes madly between each phone as well as personal calls coming through on her mobile.

Treffone gives a fearless, stalwart performance, delineating more than 30 characters (!) with distinctive accents and body language. It is a magnificent performance of great comic timing, wit and warmth as well as sensitivity and poignancy. Recommended.