A double bill of contemporary flamenco.
Lynne Lancaster
[This is archived content and may not display in the originally intended format.] 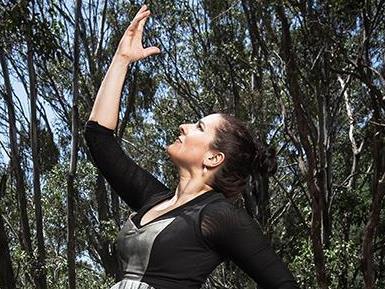 A challenging, exciting double bill that brings us flamenco; snazzy, updated and with a twist. A double bill of two short works by internationally renowned Australian dancer-choreographers who draw on Spain’s flamenco in the development of their individual styles.

The first half of the programme was Forge by Annalouise Paul. Forge is seen as ‘a metaphor for the human soul that is beaten and shaped through life’. It begins and ends with Paul staring dramatically at us.

Paul is fiery, proud and strong. With regal bearing the work is stark, dramatic, moody and reflective. In collaboration with Marianthe Loucataris and Helen Rivero Forge reinterprets the Seguiriy as flamenco style and its basis of Sephardi song. Tje soundscape ranges from rain, haunted vocal whispering, romantic piano music, an anvil being struck and more. The lighting was also inspired.

Paul begins mostly using the back wall to form strong shapes and lines with her body in various dynamic poses. Choreographically there were the snappy small jumps, strong clenched fists, lunges, stamps and palmas. The sinuous rippling flamenco arms combined with frieze-like movements and Graham-like modern choreography; a mantilla comb was used like a fan at one point.

Tobhiyah Stone Feller has designed a impressive costume for Paul that can morph from a flowing multi-coloured full skirt to a straight skirt of just a single colour with a bustle -like effect. A dynamic, compelling performance but I found the many blackouts and pauses for costume adjustments perhaps a bit distracting.

Bush Bailando as performed by Pepa Molina combined more ‘traditional’ flamenco with jazz (saxophone and woodwind). Featuring recorded singing as well as live music, reflecting the sounds and rhythms of the Australian bush.

The set included eight canes like extra large fern fronds in a bush clearing and a collection of castanets on the floor that looked like mussels and three chairs. Molina entered barefoot through the clearing and sat to put on her shoes.

The work is a celebration of the environment and we see several different styles of flamenco. There were again a few costume changes covered by solos by the musicians. Molina had among others an exciting solo in the ‘traditional’ flamenco dress with the extra-extra long ruffled train, beginning with her hidden beneath it like gently breathing coral.

For some of the work she was proud and fiery for others it was far more playful and exuberant. There were short sharp staccato fireworks for the feet and sinuous yet angular arms. At one point the choreography was quite balletic and some was quite contemporary in style with spiky hands and another section was a dialogue between Molina and the musicians.

There was also a quiet dramatically lit solo in a square of light using a flamenco cane which had Aboriginal and Torres Strait Islander designs and the solo concluded with a kookaburra laugh.