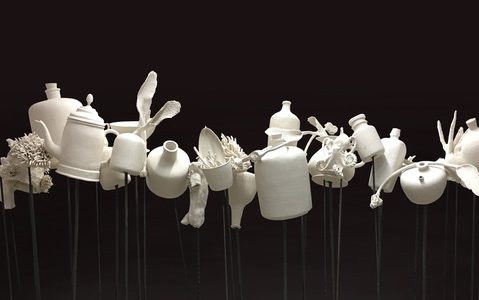 How does one respond to the unfolding and inexorable devastation of the environment? What does one do with the sense of loss, anxiety and distress this engenders? In Solastalgia, four women, Jo Mellor, Carol Hudson, Katya Petetskaya and Rachel Honnery, come together to give artistic expression to Glenn Albrecht’s uncanny notion of the homesickness and powerlessness felt when one’s environment changes in overwhelming and seemingly irredeemable ways.

Though collectively showcased, the works in the exhibition are highly personal, individually conceived and created outworkings of each artist’s grief and frustration in the face of both local and universal climate and environmental events. Solastalgia, therefore, is less a manifesto, than a collective offering to the viewer; an invitation to take the time and space to acknowledge one’s own grief, anxiety and homesickness in the face of loss in the natural world.

Layered and laboured, incrementally and meticulously crafted, whether by stitch or gesture, the work of the hand, and even of the body, is evident throughout the exhibition. A collective femininity is inevitably referenced through the precise and sometimes domestic methodologies used, giving rise at times to associations of salvage and repair, while at other times the flavour is distinctively more clinical and visceral. One might recognise, too, an implicit nod to the seminal work of Mierle Ukeles’ Manifesto for Maintenance Art 1969!, underpinning the critical importance, if not celebration, of maintenance in sustaining systems, societies and by extension the very world we live in. Precision and delicacy are equally at play in this collective body of works. The careful and incremental iterations necessary to complete each artwork testify to thoughtful labour, fulfilled over time. They serve too as a critique and counterpoint to the careless exploitation and wanton destruction of the environment, meted out in increasingly rapid and severe doses.

Carol Hudson’s detailed and delicate graphite drawings explore and describe the intertidal realm. The fragility and otherworldliness of this unique ecosystem are echoed in Hudson’s lightness of touch and attention to detail in the meticulous rendering of this interstitial space and its offerings. Human interaction in this realm is referenced explicitly through the depiction of the body, and also implicitly in her drawings of hybridised objects, crafted as unlikely reflections around precise axes, a conflation of man-made detritus and seaweed. This notion of competition and human colonisation of the ecosystem is further explored in her ceramic totems, which form a blanched and bleached catalogue of colonial pottery that has shaped and been shaped by the marine space they infiltrate.

In Jo Mellor’s textile banners and tapestries, we see cartographic layers of hand-stitched lines over digitally printed fabric, creating delicate, web-like criss-crossings across the weave in rusts and red. The accumulation of laboured pattern and detail references abstracted impressions of drought-affected land and mining detritus and is sometimes reminiscent of cracked earth waiting thirstily for rivulets of rain, and at others of an organic palimpsest of bacterial growth. For Mellor, hand-stitching is a nurturing and nostalgic act of repair, camouflaging wounds in a transformative and tactile way. Mellor’s connection with the Broken Hill and Menindee landscapes she references is both personal and political, and her handiwork, including the text it sometimes incorporates, testifies to this participation and contribution to the narrative of place.

Katya Petetskaya’s fluid and gestural paintings also bear witness to a personal presence in the creation and narrative of her work. Though not explicitly tied to a specific place or climate event, Petetskaya’s biomorphic forms, emerging from gestural sweeps of blue paint, pulse with a rhythm and energy that belie a visceral and emotional connection to the environment. Thwarted passion and errant control play out in the titles of Petetskaya’s work; nature is a fragile lover, and the negotiation of power is borne out in her practice. The performative, spontaneous aspect in the creation of her work allows her to play with form and nuance, abstraction and representation, in sweeps of application and erasure of paint that speak of possession and pain, domination and loss. The longitudinal and latitudinal stratifications, charting across the ribbon-like banners, act as calibrations, reminiscent of a measured, if irregular heartbeat, organic yet clinically contained.

For Rachel Honnery, the bodily investment in her artistic response to environmental malaise, specifically incited by the devastation of the 2019/2020 bushfires, is pronounced and personal. Totemic structures trussed and suspended like an eerie skeleton forest are crafted, stitch be stitch, in a literally painstaking act. Layers of yarn, wax and ashen pigment build slowly on one another in her process-led practice that looks to science for its experimental impetus and rationale. Rachel’s autoimmune disease, and the physical and psychological pain that accompanies it, are mirrored in her depiction of environmental loss and degradation. In her series of photographic nude self-portraits, Rachel’s anguish is palpable. As she strains against an entangled web of her own creation, the uninvited assault of disease on her body is an unmistakable and keenly-felt metaphor for the sweeping and devastating loss in the natural environment.

Anxiety, by its nature, can be isolating and often debilitating. Solastalgia, an anxiety response to environmental loss, is equally keenly felt at the individual level. Rather than becoming just a catalogue of woes and an accumulation of psychological distress, however, this exhibition invites the viewer to share in the process of acknowledging the devastation of place. The mourning of loss does not have to be the end point. Through their industry and labour, care and repair, the artists in this exhibition show us that incremental work can be a salve for distress. Overwhelming challenges are offset by precious labour, precision in the face of annihilation. In this collective offering of work there is, therefore, a collective offering of comfort and transformative agency. For some, this may lead to a rethinking of their relationship with the natural world, a shifting from dual to dialogue. For others, it may even lead to hope.

Jo Morrow is an art writer, artist and educator.