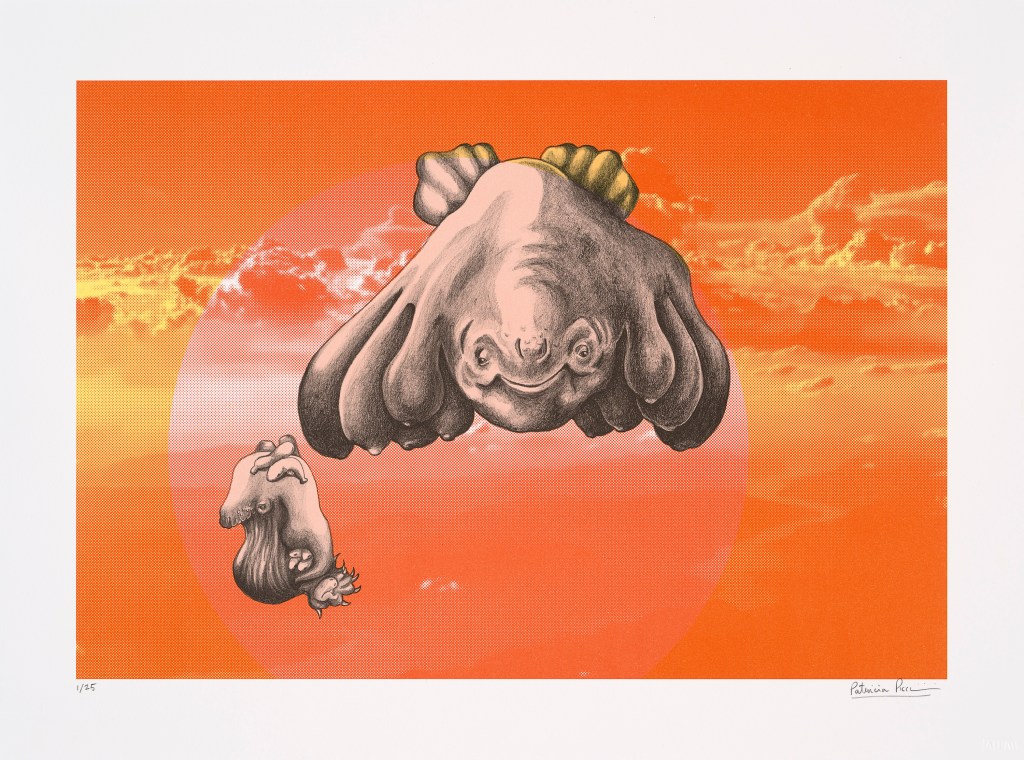 In its supporting texts, New Australian Printmaking pops out some high-flying vocabulary. The exhibition is said to be ‘ground-breaking’, ‘significant’, ‘ambitious’, ‘vital’, and ‘major’. Are preeminent artists diverting into printmaking (and their resulting pieces) so profound? In this instance, maybe not. Still, the exhibition settles into something respectful and sustainable beyond its lofty words.

Its understated curation mellows against its bold exhibiting neighbours, Mass and Who Are You. Although calming, this is sometimes to its detriment. Wide spaces swallow the prints, causing the exhibition to look dimensionless to those dipping through NGV’s spaces. But, if the viewer slows and finds proximity with the works, their subtleties characterise the exhibition more than its self-imposed hype.

Cope’s lithographs of archival military maps reclaim the landscape of her Ancestral Country by fading colonial boundaries and infusing blue reminiscent of the beautiful sea country (Yarabindja Budjurung in the Quandamooka people’s language). Piccinini translates her Skywhales (that have populated our Instagram feeds as they float through suburban skies) onto paper. Meanwhile, her lines in Weavers’ Suite muse anatomy, femininity, and nature with disarming delicacy.

In the third space, Gladwell’s monochrome and Maguire’s colour juxtapose against each other. Gladwell’s energised, mechanical compositions appear like machinations of urban movement, with unexpected details digressing the visual real. Parallel, Maguire masters Dice Abstracts with seductive texture and surreal feeling using only three primary colours with composition chosen by a dice roll. They are both demanding and soft in each iteration.

The bodies of work sit side-by-side like individual solos with little through-line besides the slightly interesting fact they are each created by recognisable artists experimenting with printmaking. However, a three-channel video documenting their fellowships, featured twice with audio heard throughout the exhibition, builds some cohesion.

The artists’ reflections in the video also bring some transparency to the exhibition’s goalposts. Under the APW fellowship, the artists took a minimum-risk-high-reward leap beyond their bread-and-butter, with their established skills predisposing them to create work good enough for the NGV while trying new artmaking techniques. The documentary extends this win-win to the audience, too, as they meet art behind the scenes rather than only ogling the final product.

The last room’s display cases, which include the artists’ proofs, colour palettes and other materials, continues the pleasure of peering into the creative process. The proofs, in particular, impart energy beyond their refined final form, exposing Gladwell’s imposing detail, the self-assured process of Maguire’s variations, Piccinini’s controlled movement, and the deliberately laid narrative of Cope bled by colour.

A major gallery centring artistic practice feels thoughtful in the age of large-scale exhibitions and their blinding aesthetics. More tame than ground-breaking, New Australian Printmaking has a present – although introverted – mindset. Grand notions aside, it subtly composes an evergreen appreciation of an ancient medium – future-proofing printmaking through the process, collaboration, and experimentation of producing something new.