A sculptural installation that melts with the passing of time.
Celina Lei 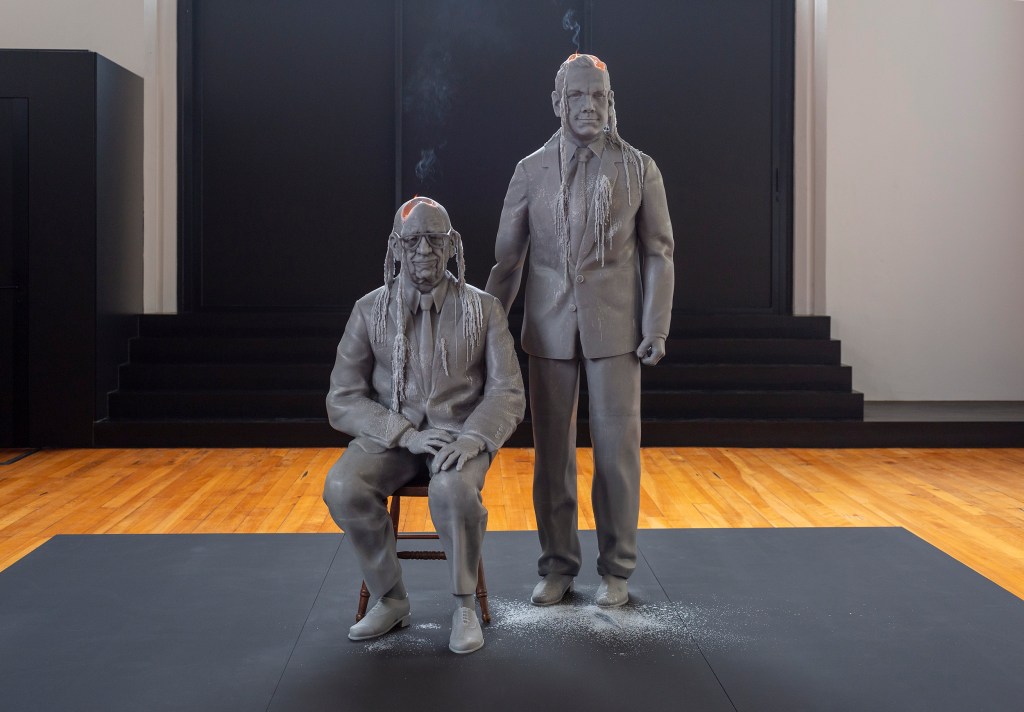 ‘Deller’s deconstruction of patriarchy, oligarchy, and other systematic structures of power through the public burning is a slow and messy journey.’ Photo supplied.

Entering the church among post-lockdown peers eager to be in the physical presence of art again, two life-size wax figures – an older sitting while the younger stand with a hand on his chair – occupy the symbolistic space, both fuming from the candle light burrowing through their waxy heads. Here, the gods become the offering, but to what end?

Whether one caught the figures’ stark resemblance to media tycoons Rupert and Lachlan Murdoch or not (the figures male, white, and dressed in corporate suits), Deller’s deconstruction of patriarchy, oligarchy, and other systematic structures of power through the public burning is a slow and messy journey.

Jeremy Deller’s ‘Father and Son’ is a 12-hour offsite work commissioned by ACCA, who usually stages thoughtful, engaging and challenging exhibitions at their Southbank home.

However, the scrutiny towards ‘existing power structures’, ‘generational change’, and Deller’s deep connection to art history that was offered in its statement didn’t translate.

The waxed men are cast with expressions half way between a grimace and a smile, awkward and unwilling – perhaps at the idea of standing next to each other, or at the fact of being put on display only to slowly lose their composure.

In broad daylight, the deconsecrated church wasn’t able to reach its full ritualistic power, its pristine walls and windows of natural light functions almost like a white cube. I can’t help but imagine what if the walls were left industrial, run down even? Perhaps Deller wasn’t aiming for a ‘visual spectacle’ (though the ambition of detailing two human figures down to the wrinkles with wax suggested otherwise), but to prompt slow contemplation matching the trajectory of the melting, splattering wax.

It’s a work that requires constant (not to mention digital) commitment, otherwise it leaves you with this insatiable hunger for something more, something bigger and something instantly disruptive. You are left curious, but just like the slow tunnelling wax it feels like a rabbit hole – ideas melt away rather than consolidate.

The one thing the work did achieve was it forced people to slow down and look, wait and observe. That in itself may warrant some appreciation of the visual element of the work, or perhaps this effect is leveraged through its durational, i.e. temporary and changing, existence.

It was the final moments that ACCA shared on their Instagram concluding the ‘performance’ which caught my eye – the father looks down, defeated or indifferent to his own hollow wax head, at the collapsed and deranged face of the son, his body standing decapitated at the eleventh hour.

Jeremy Deller ‘Father and Son’ was presented by ACCA at St Saviour’s Church of Exiles, Collingwood, Melbourne from midday to midnight on 6 November 2021; the work was live-streamed for its duration.