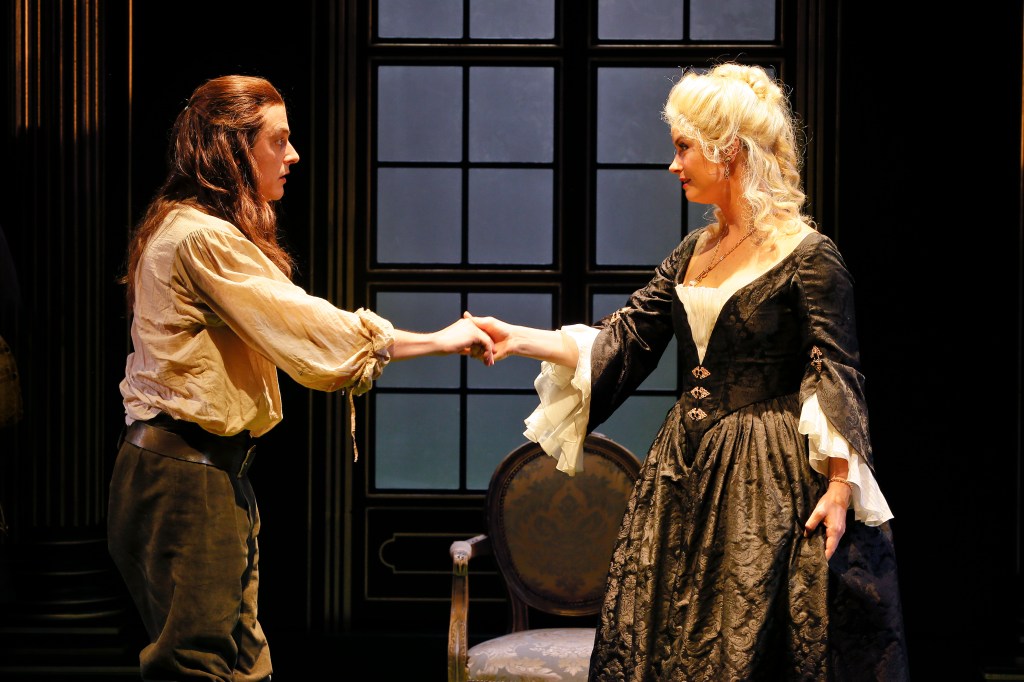 James Mackay as Orlando and Christie Whelan-Browne as Rosalind. Photo by Jeff Busby.

For literary critics like Harold Bloom, whose study of the English Renaissance defined Shakespeare as central to the English literary tradition, As You Like It’s Rosalind was considered to be the most effective in the romantic mode insofar as the heroine both makes love to and hides her love from an amorous gentleman seeking his fortune. Christie Whelan Browne shines in this classic role and though she’s admitted elsewhere to not thinking of herself as a Shakespearean actress, she takes to the role as naturally as a faun to the forest, and leads a big closing number that seems to make the English Renaissance pastoral comedy as memorable and trendy as a Sondheim musical review.

In this production, the songs are the skeleton of the action and the band performing the arrangements of Kate Miller-Heidke and Keir Nuttall comes to represent a lush liveliness that grounds the play as firmly as Alicia Clements’ enchanted forest set design. The musical interludes, together with a committed approach to big, almost commedia dell’arte style physical comedy, make the play one of the most accessible places to start for young people new to Shakespeare.

Then of course, there are the lovers and all the love, and under Simon Phillips’ direction the script is played for its hijinks and laughs so that every character gets a turn in the spotlight. James Mackay’s Orlando imbues the character with a broad Australian ease and equal sincerity: the surety of his love and his confusion through every misdirection is genuinely touching. There is the high camp of Touchstone (Daniel Fredriksen) and Audrey (Xani Kolak), the comic unrequitedness of Silvius (a charmingly sincere Laurence Boxhall ) and Phebes (a rollicking high comic Natalie Abbott). As well as the sisterly intimacies of Georgia Flood’s Celia and Whelan Browne’s Rosalind, this is a play that celebrates love in all its forms.

There are a few memorable moments of sombreness to balance the frivolity: Tim Walter delivers a memorable ‘seven ages of man’ speech and adds a thoughtful, melancholy note to the proceedings by letting the play’s textual richness dance along with its words. Along with the size of the cast, the costumes have all the memorability and period adroitness of garments that have waited through a long winter to be seen.

The critic Northope Fry argues there is a relationship between comedy and spring and also between the idyllic mode of the warmer seasons and the idealised way a lover perceives romance. After so long in lockdown, a night at the theatre is a promise of a fine romance, and As You Like It delivers to spectacular effect.

As You Like It, MTC
Southbank Theatre, The Sumner