A musical but albeit a low-key one with a murky palette and Bob Dylan's lesser known songs.
Dennis Clements 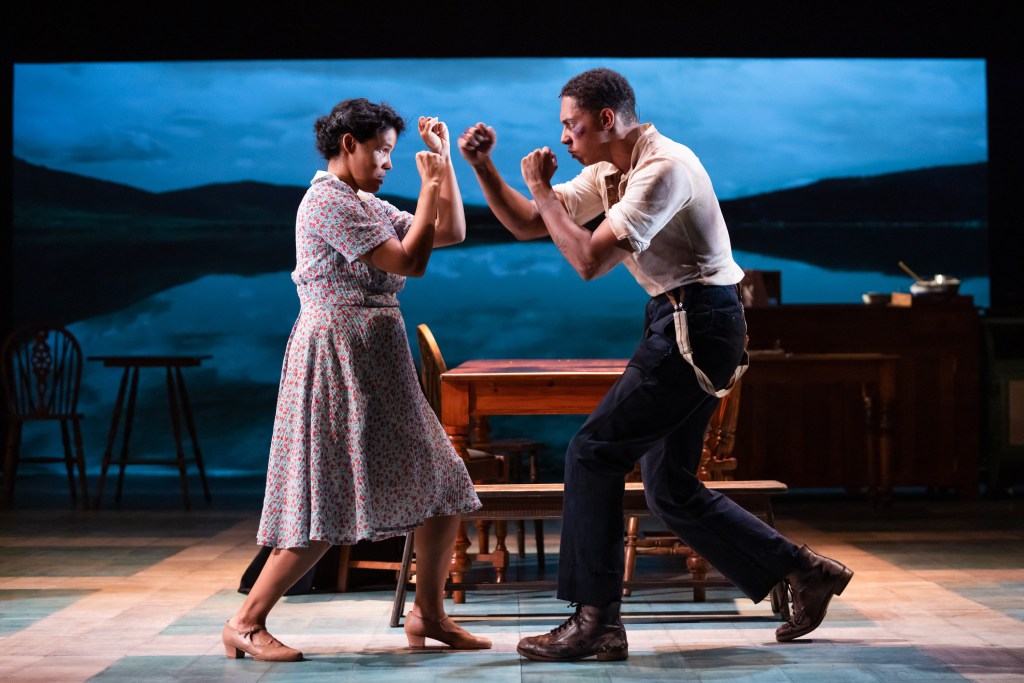 Girl from the North Country ‘does not try to be a musical comedy, but rather a drama with accompanying music.’ Photo by Daniel Boud.

There is a substantial trend for what has become to be known as the ‘Jukebox Musical’ in the last few decades – a theatrical story crowbarred out of the music repertoire of a particular artist. Think Mamma Mia, Jagged Little Pill, We Will Rock You, and so the list continues.

Girl from the North Country uses the songs of Bob Dylan but is not much like those other shows.

Creator Conor McPherson chooses not to force these songs into a story, but rather lets them float alongside the narrative, rather like stopping for a moment to listen to a song on the radio before you get on with what you were doing before. The use of vintage microphones in most of these moments separates the music from the text, but not to any great purpose.

And it is a rather bleak and quite complex narrative that we are asked to follow.

Girl from the North Country is set in a Minnesota long-stay guesthouse in 1934 – a brave choice to relocate the anthems of the 60s to an earlier world. It’s winter, the Great Depression is rampant and everyone is down on their luck. Way, way down. Everyone seems to be living with a dark secret or a struggle of some kind and rather than things getting better, everything seems to go downhill from there.

There’s a lot of pain in this story. McPherson piles tragedy upon tragedy till it becomes almost comic. Financial ruin, mental health issues, alcoholism, prejudice, unexplained pregnancy, death. Really – what else could go wrong? It’s curious that this is the palette with which McPherson chooses to paint Dylan’s songs. Dylan gave hope to generations that things could and indeed should change. Some may find this pairing an appropriate synergy with Dylan’s wailing style and spotlight on social inequality and injustice. However it was rather more difficult to see anything positive in the future of these characters. The times were certainly not ‘a-changing’ for the better for these folk. (A song that is definitely not in the show!)

Maybe that’s what is special about this work. It does not try to be a musical comedy, but rather a drama with accompanying music.

So don’t come to this musical expecting dancing girls. But what you will get is a cast of incredible talents who bring their quite singular vocal skills to these reinvented Dylan songs. There really are very few of his ‘greatest hits’ used in the show, and that might be a blessing really, as there are much fewer giggles of recognition to deal with – always the curse of the jukebox show, and particularly prevalent throughout current performances of Moulin Rouge. It is perhaps only the die-hard fans who will know more than half the songs used. And that lets these performers create some wonderful vocal magic that becomes the highlight of the evening.

Callum Francis as Joe and Zahra Newman as Marianne bring profound power and musicality to their performances and Christina O’Neill’s Mrs Neilson can rip your heart out with her passion. Lisa McCune succeeds in an unexpected role, showing us she can adapt her impressive vocal chops to any genre and surprising us as Elizabeth with her blend of fragility and brashness.

Wonderful acting performances are required to hold this piece together and we are treated to some of the best in this show. Peter Kowitz as Nick anchors the story perfectly as the desperate proprietor of the ailing guesthouse and Greg Stone imbues the character of Mr Burke with a tightly wired energy that is always only seconds away from breaking through.

I would pay good money to see Peter Carroll reading a phone book and he doesn’t disappoint here with a subtly comic undertone to the rather dark figure of Mr Perry. And Terence Crawford is a compelling and appealing narrator figure, as calm and focused as Gregory Peck at his best.

It would just have been nice to see those performances a little more clearly. The ambient lighting, while definitely evoking much of the faded, bleak atmosphere, certainly doesn’t do the actors any favours. It was very hard to see expression on any faces as they moved through the miasma, only occasionally lucky enough to be caught by side lighting. But that seemed to be a theme in the staging. Positioning singers with their backs to the audience, using upstage action and silhouettes to pull focus from the lead singer, all to create a rather muddy visual dreamscape, where text and song entwine, and applause is discouraged. Yes that’s right – no space for applause – it’s not your regular musical, remember! I’m sure this was intentional but all in all, the staging and lighting seem to do their utmost to distance us from what is happening on the stage. It seems rather counterproductive and prevents us from engaging with these stellar performers. I’m not sure what Blake Erikson’s character Elias did to deserve decent lighting, but it was a glorious relief to actually be able to see as well as hear Erikson nailing the vocals superbly.

If you’re a fan of Dylan you may be intrigued by this reinvention of his work. You will certainly be impressed by the talent of this amazing cast, many of whom surprise with their extraordinary versatility. And it is wonderful to have the Theatre Royal back in the mix of Sydney theatres and to be able to support the return of live theatre during this equally bleak and challenging time for the performing arts. Mask up and get out there!

Tickets: $49.90-$165
Girl from the North Country will be performing in Sydney until 27 February 2022 before transferring to Adelaide and Melbourne