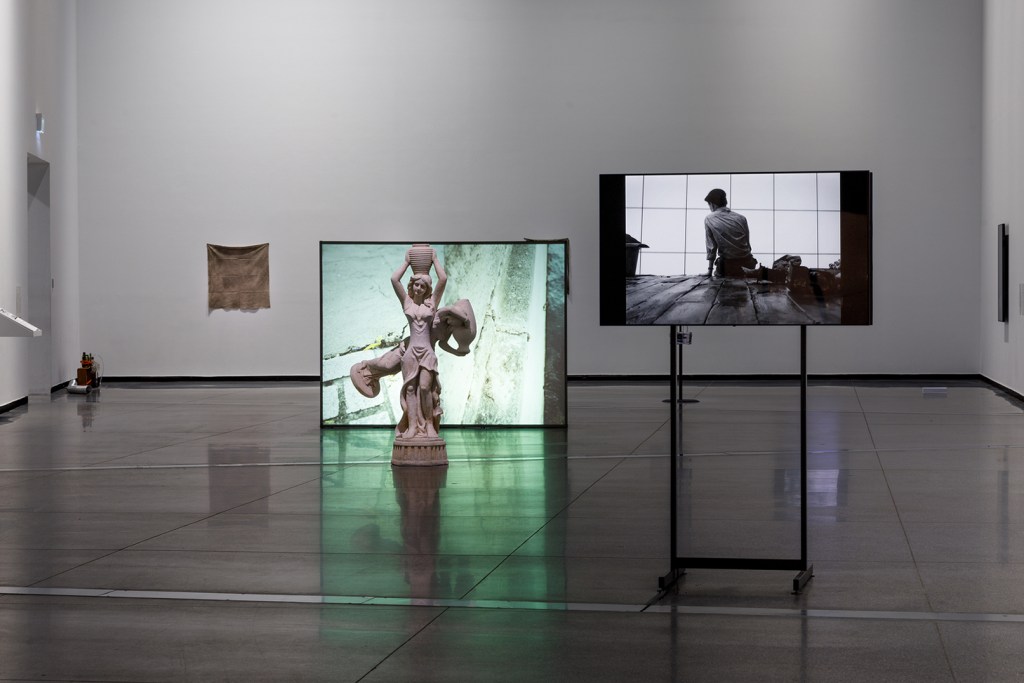 An intelligent show that suggests, as ancient Greek philosopher Heraclitus posits, an understanding that ‘everything is in a state of becoming.’ Picture by Andrew Curtis

The notions of time and transformation play an important role in the exhibition A Biography of Daphne currently showing at the Australian Centre for Contemporary Art (ACCA).  Bookending the show are two prints. The first, Anthonie Waterloo’s etching Apollo and Daphne (1650s) depicts the nymph Daphne’s flight from Apollo.

In this highly unusual representation of the myth Daphne is depicted the moment before her metamorphosis into a laurel tree. We see her fleeing her unwanted pursuer, her body entangled with the forest eluding to the moment of capture before becoming a tree.

Between the first and second print is a whole exhibition to be explored. The viewer, presented with Waterloo’s print on entering the first of the large rectangular galleries is then invited to take a temporal journey of transformation, as the second space folds back in a U- shape on the first, with small rooms, like shoots, branching off and waylaying them before arriving at the final destination, the second print by Agostino dei Musi.

In this engraving, Apollo and Daphne (1515), Daphne who is still managing to elude Apollo, is depicted in the act of transformation; branches sprouting from her fingers and roots stem from her feet as bark encroaches on her skin. One hand, moving beyond the picture frame, perhaps suggestive of incompleteness and the ongoing nature of these acts of transformation.

After a number of delays and changing iterations due to the COVID pandemic, the final configuration of the exhibition showcases the work of 22 national and international artists exploring the theme of metamorphosis across a range of mediums from print, painting and sculpture to video, performance and film.

Guest curator Mihnea Mircan, a PhD candidate in the Curatorial Practice program at MADA, Monash University, explores ‘temporary personifications of passion and defencelessness, violence and endurance, change and its permanence,’ using the Greek/Roman myth of Apollo and Daphne as ‘the starting point’.

In his sculptural piece Core-coralations (2021), Nicholas Mangan explores the effects of climate change on the organism of coral which is ‘at once animal, plant and stone.’ Using a necklace dummy as the form on which to construct his torso, Mangan challenges the viewer to consider the analogy between asphyxiation of the coral due to changes in water temperature and the human bronchial system gasping for air by creating coral-like tubes lurching from a human chest.

Juxtapositions in the exhibition that in some form replay Daphne’s ‘figural’ drama of sexual violence and the connected themes of misogyny and aggression towards women and minority groups can be seen in the works of Wingu Tingima and Gabrielle Goliath that have been placed in close proximity and provide contextual support to each other.

Kawun (2005) by Wingu Tingima, a synthetic polymer paint on canvas, depicts Jukurpa (The Seven Sisters, a dreaming narrative), and their constant fleeing from Nyiru, a lecherous old man who wishes to take one of the sisters as his wife). Nyiru tries to deceive the sisters by turning himself into a quandong tree; however they eventually evade his advances by ascending into the sky and becoming the constellation known in the West as The Pleiades, followed eternally by the hunter Orion.

Elegy (a eulogy dedicated to Kagiso Maema, a trans woman murdered in 2018) is part of an ongoing performance that began in 2015. Fifty-five minutes long and documented in digital video, it explores the continuing traumas of apartheid, sexual violence and patriarchal power in South Africa.

The production features a group of sopranos queuing in front of a starkly lit, small wooden plinth, taking it in turns to intone a sound, ‘a continuous sung cry’ of mourning.

The relational placement of the works is an important curatorial element, giving context and a larger voice to individual pieces and the central metaphor of the show. Other interpretive elements are extensive text labels which expand on the art works and help guide the viewer through the exhibition.

A free booklet is also available as are artist talks, past and upcoming (COVID applicable), which can be found on the ACCA website.

Near the end of the show, tucked in a corner is a piece that possibly echoes the final, but incomplete transformational nature of the last print.

Jean Painlevé’s 1928 film The Daphnia (9.29 minutes), documents the way water fleas adapt to their environment. Considered one of the inventors of the nature film, and influenced by the Surrealist aesthetic which paired science and fiction, the film explores the way these creatures evolve to change by adaptive sexual behaviours and the ability to grow defensive helmets, neck teeth or tail spines when exposed to chemicals released by predators.

Popularised by the Roman poet Ovid, in his collection of myths about transformation Metamorphoses, in the 8th- century of the common era, the story of Apollo and Daphne has a long interpretive lineage and seen many iterations. In the exhibition it’s a metaphor that grows beyond its initial symbolism to something much larger and more expansive, complex and empowering.

This is an intelligent show that demands time and commitment from its viewer to appreciate and, as suggested by the ancient Greek philosopher Heraclitus, to understand that ‘everything is in a state of becoming.’