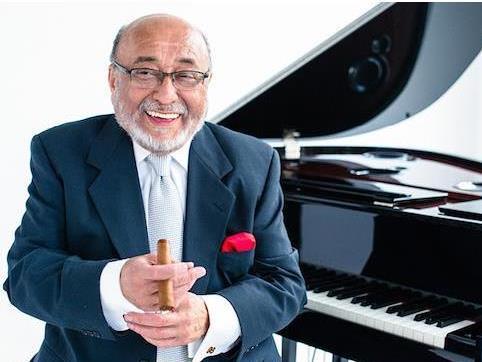 Eddie Palmieri is the recipient of five Grammy awards plus the National Endowment of the Arts Jazz Master Award, the highest honor an American jazz artist can receive. Yet, he may have wondered, at 79 years of age, whether bracing a cold, rainy Melbourne night to play the music, born and bred in the tropical climates of Africa, Cuba and the Caribbean, would be worthwhile. Would the fans remember him and be ready to grab their walkers and boogie on the dance floor, especially set aside at Hamer Hall?

But they did! People of all ages hit the dance floor in their hundreds almost as soon as the rhythms hit the air.

Before that could happen, however, Palmieri reminded his eager audience that the origin of the music they loved to dance to came from the mulatto people who, in spite of receiving inhumane treatment from other human beings, kept their spirits high through their heartfelt, vibrant music.

By the time Palmieri had introduced the members of the Septet it was clear this was to be no ordinary dance gig. First though, as jazz master, on piano, he wanted to share the tune he had written for his wife during her fight with cancer two years ago. Called Life, from the very first powerfully struck note to its final gentle trill, this soulful melody displayed the essence of the man and why he has commanded award-winning orchestras for more than half a century.

After that, although Palmieri was thrilled by the enthusiasm of the dancers, frequently clapping and waving to them or getting up to applaud them, there was never any doubt as to who was in charge of the septet; a mixture of ages and races, each with incredible skills. Solos were indicated with a slight wave of his hand or nod of the head.

‘I call that thought transference,’ Palmieri said. ‘When musicians are so professional they know what you’re thinking’ and no better demonstrated than by Jonathon Powell on trumpet and Louis Fouche, alto saxe, in grey suits and ties, who would enter stage, on cue, one at a time or both together and then return to the wings after breathtaking performances.

The percussion section of Vincente playing three large congas, Camilo Molina on timbales and Nicky Marrero on bongo and timbalitos brought Afro-Cuban synchopated rhythm to the highest level. Hamer Hall rocked! When calm could be restored, we heard a beautiful solo from Grammy award winner, Luques Curtis, on an unusual double bass.

Palmieri had tried his hand at percussion at an early age but the piano, which he started playing at age 15, won out and, as he says, ‘kept him out of the gangs of Spanish Harlem’ in his early years. Instead he mixed with other music giants like Thelonius Monk, McCoy Tyner, Horace Silver, Herbie Hancock and Tito Puente.

How privileged Melbourne has been to have many of these wonderful musicians visit the city over the years and share some of their highest moments. Even in his early seventies, Palmieri said he was honoured to be invited to write the music score for a documentary about basketball, Doin’ it in the park; Pick up basketball, NYC, because he had always loved sport and New York and had never scored a film before.

We were honoured to hear it last Friday night.