This debut work by Jasmin Sheppard is a potent and poetic metaphor for many First Nations Australians as they confront the pressures to blend in.
Gina Fairley 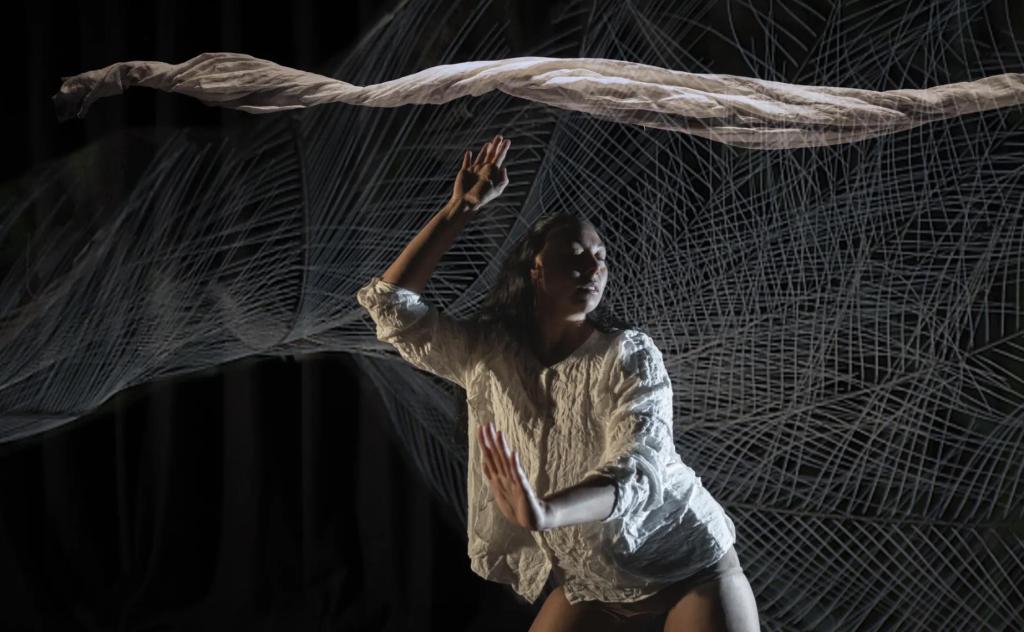 Jasmin Sheppard in The Complication of Lyrebirds. Photo: Samuel James.

This debut work by First Nations choreographer and dancer Jasmin Sheppard, The Complication of Lyrebirds, takes its cue from the native Australian bird and its capacity to mimic the song of other birds, as well as man-made sounds.

For Sheppard it’s a potent and poetic metaphor for many First Nations Australians as they confront the pressures to blend in. It’s a smart and perceptive premise as a foundation.

Epitomised in the opening moments of the production, a video projection shows Sheppard applying a face whitening lotion to a quasi 50s soundtrack with etiquette tips and grooming advice.

The opening words question: ‘No one in the world is exactly like you, so why do we copy?’

The contrast is further set in play as Sheppard and collaborator/dancer Kaine Sultan Babij are costumed with earthy tones, and spend the greater part of the opening act writhing on the ground, moving between flowing and staccato gestures.

A persistent gesture across the production is a kind of scratching at the surface, the soil – doubling as both a gesture for the lyrebird and a potent metaphor for history and identity.

Sheppard wrote about this persistent feeling of disjuncture: ‘There’s a strong pressure placed on First Nations people to constantly prove “how Aboriginal” we are. From the colour of our skin, to that ever-common cringe-worthy question “So what percentage are you?” to how much cultural knowledge we may or may not have had passed onto us.’

It comes out later in the piece with the repeated cry: ‘Who you … who your mum?’

A potent and poetic metaphor for many First Nations Australians as they confront the pressures to blend in. It’s a smart and perceptive premise as a foundation.

As a Tagalaka Aboriginal woman with Irish, Chinese and Hungarian ancestry, such question now frame her dance practice. Sheppard spent 12 years with Bangarra Dance Theatre. This is her first solo creation, and is part of Campbelltown Arts Centre commitment to supporting First Nation artists.

As the production moves forward, Sheppard and Babij use the device of long swags of fabric as a kind of ethereal thread to the past. The overlaid projections by Samuel James deepen the narrative, and add a texture right across this production, which is nuanced and beautifully managed.

The moving in and out of colonial costumes is at time a little awkward. However, where these dancers find an ease is in the fashion parade parody Mission Fashion Humpy, which sits central to the production.

Its amusing catwalk commentary to token Aboriginal-design printed garments captures the audience, such as a skirt trimmed ‘with gold iron ore and other stolen treasures’ or the 2020 NAIDOC Collection with ‘233 years of oppressive materials interwoven with historical moments of dogma to deliver a deliberate style of confusion.’

The production builds in momentum with the third protagonist emerging as the pseudo “couture” bridal outfit from the catwalk – a kind of plumed corset structure hinting of the lyrebird as it moves between costume to prop. It is the work of costume designer Fiona Holley and prop designer Emily Adinolfi.

Again there are some clumsy moments here in the transitions, and the production struggled technically to hold a finesse.

Nevertheless this modest production holds viewers and offers a great deal. There is also the use of historical documents, including ‘The White Australia Policy’ and ‘The Exemption Form’, and the projection of historic images and text on clothing in an effective narrative of confinement, labour, and assimilation.

Overall, this production has great bones – it is conceptually solid, and offers great range and nuance. But most of all it is a narrative from the heart that is both respectful and contemporary. It is easy to be forgiving for its lack of technical sharpness in places, and rather is a very heartened celebration of the next chapter in an emerging career.