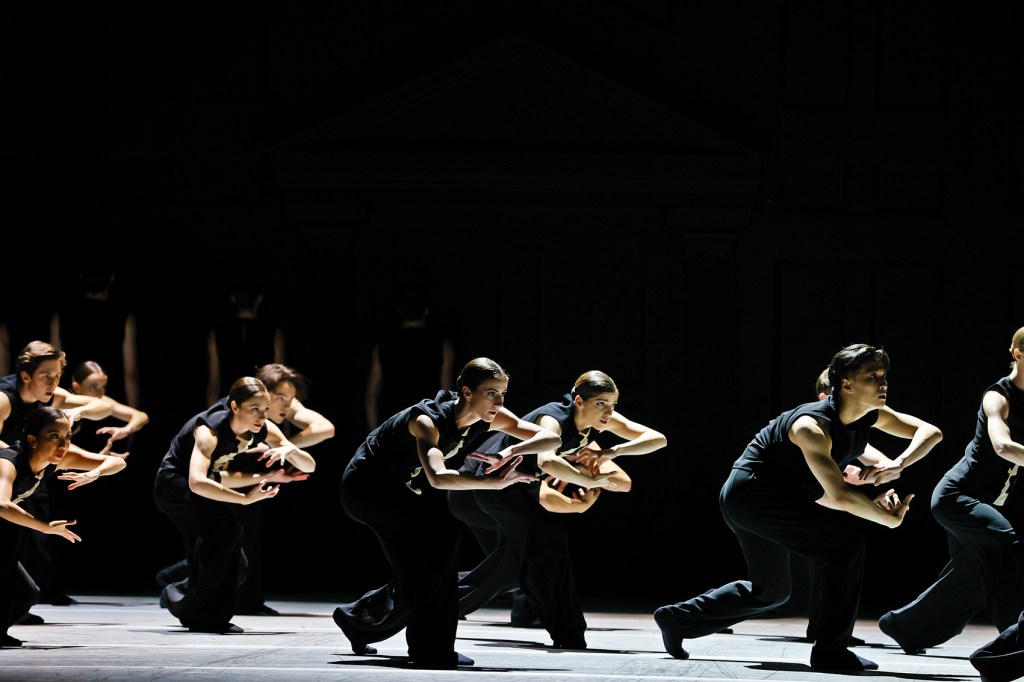 ‘At times the dancers were staggering, stiff and at other times their movements were molten, fluid.’ Photo by Jeff Busby.

At the programming of Kunstkamer for The Australian Ballet’s 2022 season by Artistic Director, David Hallberg, he forewarned this would be a ballet ‘unlike any we’ve ever done before’. These words certainly stood up to scrutiny on Friday night as Kunstkamer premiered on the Melbourne Arts Centre stage. A curious and obsessive work of genius, created by four choreographers and bringing  together over 40 of the company’s dancers, the ballet was spectacularly unique.

Kunstkamer was created for Nederlands Dans Theatre in 2019, taking inspiration from the menageries of natural wonders that became popular in the 18th century, as well as Albertus Seba’s exquisitely illustrated book The Cabinet of Natural Curiosities. The overall direction of the ballet, said choreographer Paul Lightfoot, is to draw a lineage between artistic and scientific practice, to elucidate the vital connection between all things in the universe. Kunstkamer, he said, is ‘like a museum’ where one begins to see the ‘thread or spirit’ uniting works of art and curiosities.

The effect was a ballet that was wildly overwhelming, with skilful synchronisation of dancers and an elaborate set. The stage was transformed into a hallway with tall doors where the dancers would appear, an angelic glow illuminating their entrances and exits. The lighting alone was a fine orchestra, kudos to Tom Bervoort, Udo Haberland and Tom Visser, as spotlights shifted focus on each of the dancers, and shadows were used to create an eerie atmosphere.

Incredible also were the films by Rahu Rezvani, projected on the curtain at the beginning of the work, androgynous bodies echoing across the darkness, each sinew of their alabaster bodies glowing then fading to a ghostly blur. The comic appearance of a rhino in the projections set the tone of playfulness as the curtains opened.

The music shifted frequently throughout the piece, from chamber music by Henry Purcell to contemporary composers, namely Òlafur Amalds. Purcell’s ‘King Arthur’ choral piece was spine-tinglingly performed by the dancers, another glorious surprise. The score, played beautifully by Opera Australia Orchestra and Orchestra Victoria, intricately tracked the changing register of the piece, taking the audience in a capricious and engrossing journey. ‘We wanted to create an evening that flowed much like the experience of reading a book,’ Lightfoot said.

So many sections of the choreography were strikingly brilliant; there were wry departures from classical ballet, such as robotic rises into attitude derrière, a lift where a dancer is supported to walk up a wall and reflex-like grands battements. At times the dancers were staggering, stiff, and at other times their movements were molten, fluid. The costume design, by Jake Visser and Hermien Hollander, accentuated the drama of the movement, as the corps jétéed in trench coats across the stage, coat tails swishing behind them.

Lilla Harvey and Callum Linnane were stunning in their angular, sleek pas de deux sequences. They turned and balanced with the serenity of a hanging mobile, and beautiful flexion and energy. David Hallberg was commanding and statuesque in his highly anticipated role of the spirit or Kunstkamer housekeeper. His smarmy diction and twisty moves were perfectly articulated and compelling.

Truly Kunstkamer captures an important moment for the Australian Ballet after the last few years of isolation and delays, the coalescence of so many magnificent artists thrown full-heartedly together to celebrate the power of art to move and the wonderful enigma of human connection.

Kuntskamer will be performed until 11 June 2022