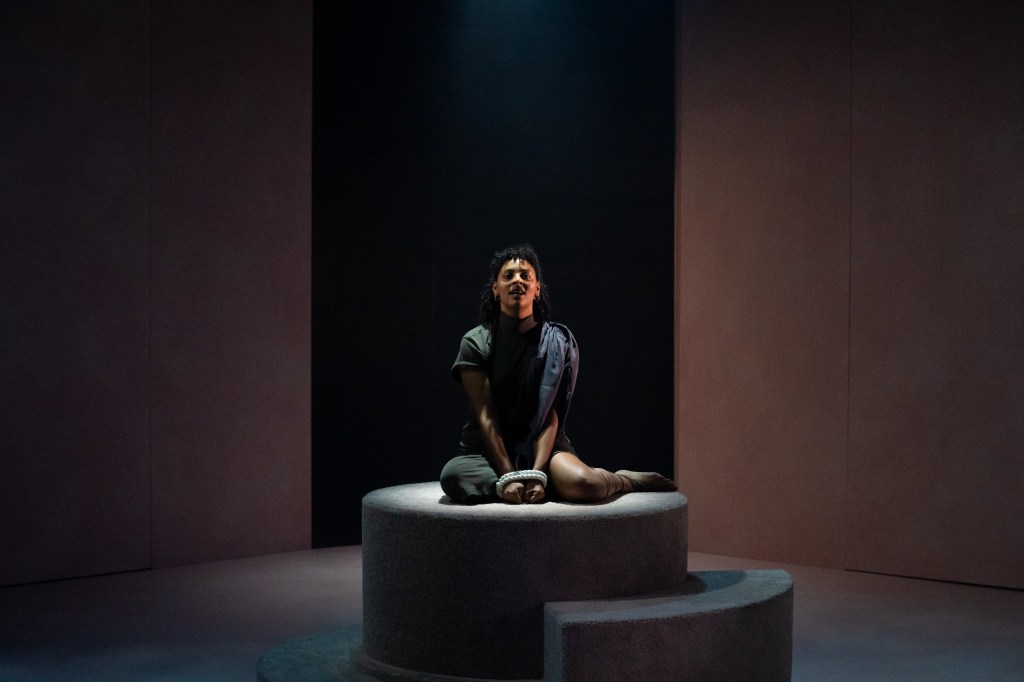 Women’s voices are taking centre stage in the State Theatre Company’s 2022 season, and in Elena Carapetis’s reimaging of Antigone, those voices are unshackled, furious, and demanding revolutionary change.

This production opens on a familiar scene from the Sophocles play: Antigone (Kidaan Zelleke) is brought bound to the newly-crowned King Creon (Mark Saturno), who is livid that she has disobeyed his command that her traitor brother is not to be given a proper burial. But as soon as the words ‘2000 years later’ flash on screen, we are whisked away through a kaleidoscope of dramatic vignettes, personal stories, and dialogue taken from the mouths of our own politicians. Directed, fittingly, by 23-year-old emerging talent Anthony Nicola, this version of Antigone’s story is a warning of what we risk when we ignore the voices of women and young people.

The cast is adept at handling the swift tonal changes and challenging range of characters. Zelleke (experienced in reimagining tragic heroes after starring in last year’s Hamlet in the Other Room) and Saturno face off in a particularly confronting scene dealing with gun violence in the US, before Chiara Gabrielli strides on stage to deliver an unapologetic, knife-edged comedy set as Antigone in a striped suit. Later, in the middle of a return to the traditional Antigone drama, Kathryn Adams bursts into scene to perform a Disney Princess power ballad, wearing Janelle Monáe-esque vagina pants.

These vignettes are accompanied by historical footage and famous quotes shown on large screens, as well as frequent (and sudden) raucous alarms and flashing lights. Antigone’s defiant ‘I will not!’ to Creon echoing into the voice of Julia Gillard repeating those same famous three words is a nice touch. Thankfully, with all this going on, the actual set is kept simple: a few movable blocks can be endlessly adapted, bringing some sense of cohesion to the fragmented scenes.

With such an ambitious range of material to cover, however, the play does feel a little disjointed at times. And in trying to tackle as many big feminist themes as possible (domestic violence, oppressive gender roles, sexism in politics and the workplace, witch-burning, gun laws, period shame, high suicide rates for men, rewriting the canon: it’s all there), it sometimes slips into predictability. Antigone spouts girl-power manifestos while Creon gleefully taunts her that no one will remember her name; later, under a dramatic spotlight, Zelleke sombrely intones a list of bad men from Hitler and Stalin to Weinstein and Trump.

But if many of these things have been said before, it’s largely because the problems being spoken about remain all too relevant, recurring with exhausting and infuriating frequency throughout history and around the world. Carapetis’s Antigone is an unashamed roar that refuses to be polite about issues of dire urgency and urges us into action. As director Anthony Nicola notes, ‘Antigone is rising all around me.’

Antigone will be performing until 11 June 2022