Rhiannon Newton's latest offering is a meditation on the human body’s relationship to its sensory environment.
Cleo Mees 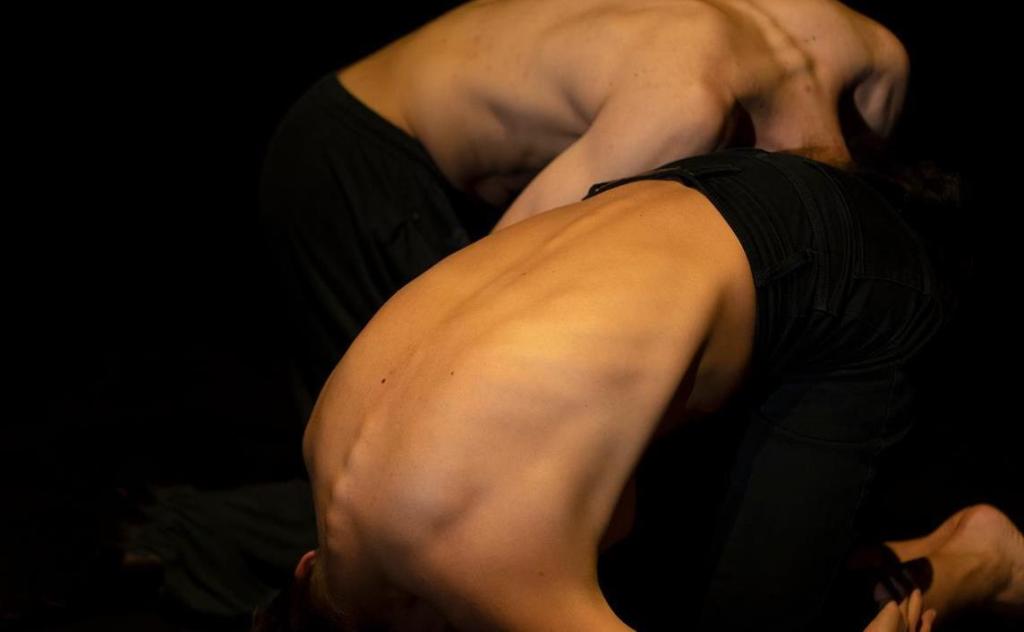 Rhiannon Newton’s Explicit Contents unfolds as a series of sensory images held up by the artist for our contemplation. One scene follows another in what feels like an invitation to ‘sit with this; and with this; and now this.’ The effect is a slow-burning, almost meditative accumulation that draws us gradually but unmistakably into a quiet, suspended interior.

At the work’s Sydney Festival premiere in January, this progression began when we entered the performance space to find our seats – the house lights were up but performers Ivey Wawn and David Huggins were already before us, absorbed in their work – and commenced in earnest when we were thrown into total darkness.

The two dancers moved on a velvet floor under columns of light so dim that I had to fight to make out their outlines. They moved slowly, so slowly that dissolving might be a better word for it. At times one could barely tell they were moving at all. The scene evoked moonlight through a tree canopy at witching hour, the ordinary hung upside down.

What sounded like the crack of bones turned out to be the splat of water hitting the floor, thick drops of it falling intermittently from overhead, and soon the bodies were no longer dissolving but were spinning towards us on a midnight sea, the velvet rippling beneath them as they spiralled serenely out of the darkness.

Peter Lenaerts’s sound design was a finger running round the lip of a wineglass.

We proceeded inwards through more images, more scenes. A series of tall poses – simple, entire, sun-facing – set to intoxicating rhythm; interludes in which Wawn and Huggins hovered close to sameness, slipping constantly in and out of synchronicity. (This something Newton’s choreography does so well: it illuminates the narrow, shifting spaces between two similarly engaged bodies to make their commonalities and differences glow.)

Throughout, Peter Lenaerts’s sound design was a finger running round the lip of a wineglass, a pebble skittering down a passageway. We heard featherlight rain, steady vibrations that sometimes broadened out into harmony, and occasional stretches of rhythm as wide as a river.

When Huggins ate a mango and Wawn a passionfruit as if neither had ever encountered such fruit before, the sound was also wet and close: you could hear Wawn puncture the passionfruit rind and prise it apart, hear her suck out the seeds. Impressively, this scene was profoundly sensory, even sensual, without being particularly sexual. The ever-looming possibility of the objectifying male gaze, and the long history of sexual suggestions conveyed through fruit (and especially through women eating fruit) was held at arm’s length as the dancers gazed gently back at us and assumed postures and facial expressions that, though earnest, were never oblivious.

So maybe Explicit Contents has a second, less obvious meaning. Maybe it also refers to the process of bringing the interior experiences of a body out into the open for us to see and hear and feel. Soft fruit moving down the oesophagus, the brittle crack of passionfruit seeds inside the mouth. The contents, the interior, made explicit.

This network of ideas came through vividly at the end of the piece. Wawn and Huggins lay flat on the floor with glass pans full of water balanced on their bellies. The rim of the glass caught the light as they controlled the water from below, using their bodies to make it swill and flounce, tipping it precariously to the halo brim of the pan. Then, finally, with a sudden and exhilarating lack of ceremony, they emptied the pans out onto the floor – SPLAT! – and shed their clothes. The piece concluded with the brakes off, and this final resolution in speed, in totality, in explicit vulnerability, felt both deeply considered and deeply gratifying.

Explicit Contents is a slow-release trip that leaves a palpable residue in your body. Flying homeward down the quiet M5 later that evening I could feel it there, in my limbs and in my thoughts: a fine-lined, light-through-water clarity.

Cleo Mees is a creative practice researcher who works across writing, video and dance. She has a deep interest in improvisation and interdisciplinary practice. Cleo has made video content with musicians, performers, and community-focused organisations across Sydney, and has written reviews for RealTime Arts, Running Dog and ADSR Zine.