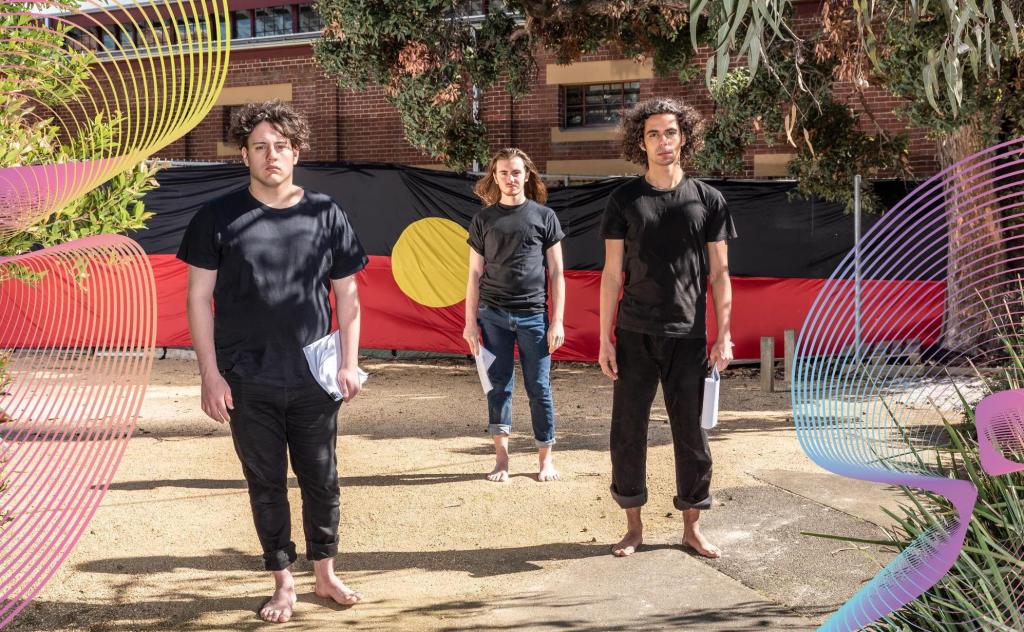 In the late 1980s, Koorie playwright and musician Richard Frankland was a field officer for the Royal Commission into Aboriginal Deaths in Custody. In his 20s at the time, the role put him at the coalface of investigating the deaths of his own people, deaths which came to haunt him.

Conversations with the Dead is based on Frankland’s experience: a young Koorie man, Jack, wrestles with these ghosts while questioning how he can fulfil his responsibilities to his community when working within a justice system that is deeply unjust. It’s a powerful story drenched in rage, survivor’s guilt, and visceral empathy, and it is painfully resonant today as Aboriginal and Torres Strait Islander people continue to die in custody with no justice.

But here, the story feels let down by a convoluted production. Conversations with the Dead is the inaugural performance from the Ilbijerri Ensemble, a team of emerging First Nations artists within Ilbijerri Theatre Company, and the directorial debut of actor Shareena Clanton. While the young actors do well with a heavy script and the chorus element lends a rich texture to the narration, the ensemble nature sometimes gets in the way of character development and pacing.

Seven young First Nations actors share all the roles, including Jack. At times they speak and move together as a chorus while in other scenes, they play individual roles, but often there are no major changes in voice, costume or movement to distinguish the various characters. The set and lighting design – a large piece of scaffolding and a river of red light – is simple and dramatic but does not help to clarify the action or to create a sense of time and place. As a result, many of the characters feel blurry – ghost-like, even – in a way that does not seem to be deliberate.

The strongest scenes are those that are grounded in character and movement. The more physical elements stand out in a production that can otherwise feel disembodied: in particular, a ritual sequence draws and holds all the energy in the room. Another sharply poignant vignette features a mother who wants to pretend that Jack is her dead son.

Jack’s own story, unravelling alongside those of the dead, is gripping, though some of the actors seem to sit more fully into the role than others.

Presented as part of Future Echoes, a festival ‘highlighting young voices, new narratives and works in progress’ at Arts Centre Melbourne, Ilbijerri Ensemble’s Conversations with the Dead comes 17 years after the play’s premiere in 2002. Nearly 30 years after the Royal Commission into Aboriginal Deaths in Custody published its final report in 1991, most of its recommendations have never been implemented.

Perhaps the most staggering thing about this production is realising that most of the actors in the cast were not yet born when the report was published. It’s devastating to think that this story has not grown old. Conversations with the Dead demands action so the future will not echo the present.