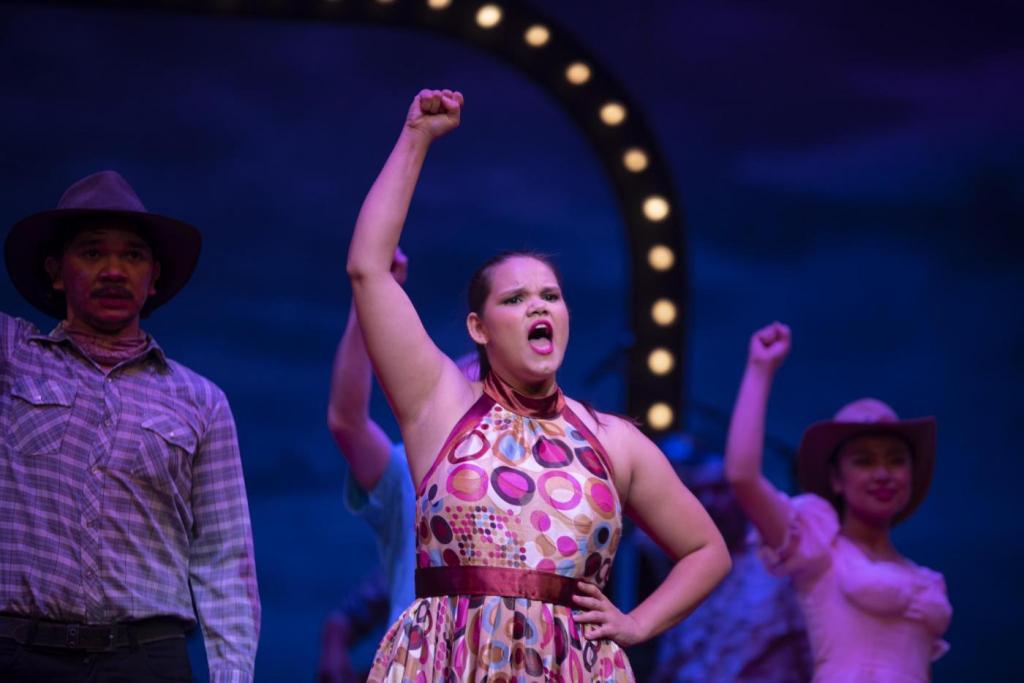 ‘Panawathi Girl causes necessary discomfort in calling attention to our failures as a country.’ Photo by Dana Weeks.

As the Australian government refuses to heed the Uluru Statement from the Heart which calls for the establishment of ‘a new relationship between First Nations and the Australian nation based on justice and self-determination‘, playwright David Milroy has written a poignant story exploring our nation’s colonial history.

Set in the 1960s, Panawathi Girl follows the story of Molly Chubb (Lila McGuire) — a young woman born to an Aboriginal mother and a white man — as she journeys to a small country town, Chubb Springs, to visit her estranged father and learn about her mother and heritage. Directed by Eva Mullaley, the musical premiered at this year’s Perth Festival.

Molly grew up believing that her mother had passed away and wants nothing more than to pay her respects to her mother’s memory. Upon her arrival in Chubb Springs, Molly continues to grapple with her identity as she brings her activism and commitment to decolonisation to bear upon a community that is not ready for change.

Panawathi Girl is set two years after the 1967 referendum in which an overwhelming majority of Australians voted in favour of the recognition of Indigenous peoples as citizens of this country.

As the audience follows Molly’s journey, we are invited to consider the parallels between present-day and 1960s Australia. Much like today, the sixties were characterised by global instability and upheaval, and Australia was undergoing a period of change as the transition from the White Australia Policy began to take hold. The sixties were a time of activism as Australians fought for gender and racial equality, opposed the Vietnam War, and advocated for de-nuclearisation.

Sombre and humorous in equal measure, Panawathi Girl moved the audience to reflect on Australia’s stalled progress towards racial equity. We remembered present-day calls by First Nations for a referendum to be held for Australians to change the constitution to uphold the Uluru Statement from the Heart.

We sank in fear at the possibility of war due to the Australian government’s refusal to adopt a foreign policy that would allow us to live with our neighbours in peace. We remembered our institutions’ lack of integrity and the violence that women continue to endure. We also laughed as Milroy’s arresting humour, brought out the brighter side of life.

Nevertheless, and despite these strengths, Panawathi Girl had one major weakness. Molly Chubb’s story was lost in the musical’s overarching commentary on the historical trajectory of Australia’s race relations.

While each of the performances was commendable, the show ultimately lost sight of Molly’s journey of self-discovery. In narrating our protagonist’s story, Milroy relied heavily on the exposition of the country’s racism to contextualise Molly’s struggle. Much of the dialogue focussed on the expression of hostilities between Aboriginal and white characters punctuated by calls for land rights and humorous exchanges between Gough Whitlam (Luke Hewitt) and John Gorton (Geoff Kelso). This stripped the relationships Molly formed with the people of Chubb Springs of any emotional depth, and here, the musical numbers proved insufficient in bridging this gap.

The musical’s excessive focus on the macropolitical dynamics of the 1960s stripped the revelation that Molly’s mother was still alive and living in Chubb Springs of all impact. In a very rushed scene, one of the characters gave Molly a photograph in which she is being held by her mother and revealed that her mother was alive and well in Chubb Springs.

The information was blurted out like a waterfall, minus the grace, and Molly readily accepted the news. Molly ought to have been disoriented, angry even, at her mother’s very existence having been hidden from her — at being lied to. Instead, the entire matter was glossed over as the characters got busy preparing for a beauty pageant.

Instead, they find themselves judging the pageant which, for the first time in the town’s history, is won by an Aboriginal woman, Ada (Teresa Rose). Consequently, while it held great promise, Panawathi Girl was ultimately anti-climactic.

All things considered, Panawathi Girl is a beautiful, fun, and important offering that necessarily pushes audiences to reckon with the contradictions that animate our country. Indeed, Australia finds itself at a crossroads between fighting for equity, justice and the self-determination of First Nations, opposing policies that stoke the flames of war, demanding that integrity underpin the work of our institutions, and building a society absent all forms of gender-based harassment and abuse.

For those who may find the show uncomfortable, Panawathi Girl causes necessary discomfort in calling attention to our failures as a country.

Panawathi Girl was performed as part of Perth Festival from 8 – 13 February 2022.