A dark and glittering new show from the ukulele-wielding comedian.
Daniel Herborn 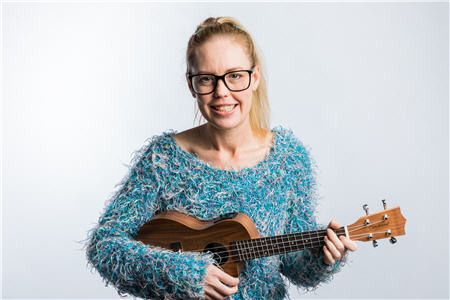 An hour of often pitch-black humour broken up with a few ukulele-based songs. Image supplied.

It’s an auspicious sign when a comedian is getting big laughs before they even appear on stage, a feat Sydneysider Steph Broadbridge pulls off here with a pre-recorded bit featuring her stuck in a backstage back-and-forth with a MC determined to patronisingly warn the crowd they’re about to see a woman do comedy.

Those laughs continue consistently across an hour of often pitch-black humour. Broadbridge, a 2019 finalist in the national Raw Comedy competition, has a skittish energy as a performer, but it’s excitability that enlivens rather than overwhelms her act. Never afraid to giggle at her own observations, she’s constantly amused and often horrified by the world around her.

After scrapping a risqué title, Broadbridge settled on Hot Chick/Tired Mum as a kind of modern update on the Madonna/Whore complex. This dichotomy, and some of the more dispiriting aspects of thirtysomething life, feature in ‘37’, one of a few ukulele-based songs that break up the show’s more traditional sections of stand-up.

The other through-line in the show is Broadbridge’s suspicion she is autistic and her attempts to get a diagnosis during lockdown. One particularly demoralising episode was a conversation with a psychiatrist whose creepy demeanour was the subject of a string of negative internet reviews. Broadbridge alternately turns these one-star warnings into a heartbroken country song complete with yodelling, a wounded emo dirge and a ‘white rap’. It’s an impressive glimpse of her versatility as a musician (she originally trained as a jazz singer) and a powerful evocation of the melancholy that underpins many of her jokes.

Perhaps the most striking stretch of the show sees her recount, through both stand-up and song, how she was sexually assaulted by a footballer when attending a fancy dress party as a university student. Recounting such a harrowing experience in a comic setting, not to mention injecting her comedian’s critique of an off-colour joke another footballer made during the assault, requires a threading of the needle, tone-wise, but it’s pulled off with aplomb.

The final song, ‘Self-talk’, wraps things up on a poignant note. While Broadbridge earlier took a good-natured shot at Hannah Gadsby, here she seems to have taken to heart some of Nanette’s hard-won wisdom on comedic self-deprecation often being a trap. She’s fashioned a musical ending that asserts her value as a person while staying true to her moments of doubt and despair.

Normally, when reviewing the first night of what’s essentially a trial show, it would be fair to note that every show is untested and unformed at this stage of the comedy festival cycle. For most performers, long glances at a notebook or bits without proper endings are par for the course. But Hot Chick/Tired Mum barely needs any such disclaimer; apart from the odd rushed bit, it’s already cohesive and impressively dense with gags.

It feels like a fully-formed, club-tested piece, a testament to the work ethic that has previously seen Broadbridge clock up more than 300 shows in a calendar year. Come next year’s festival season, this should be a juggernaut of a show and, if justice prevails, a vehicle to a deserved breakthrough.

Daniel Herborn is a journalist and novelist based in Sydney. His writing has appeared or is forthcoming in The Saturday Paper, The Monthly, The Guardian, The Sydney Morning Herald, The Age, and others. He has also practised law at an Intellectual Property firm specialising in creative industries clients.