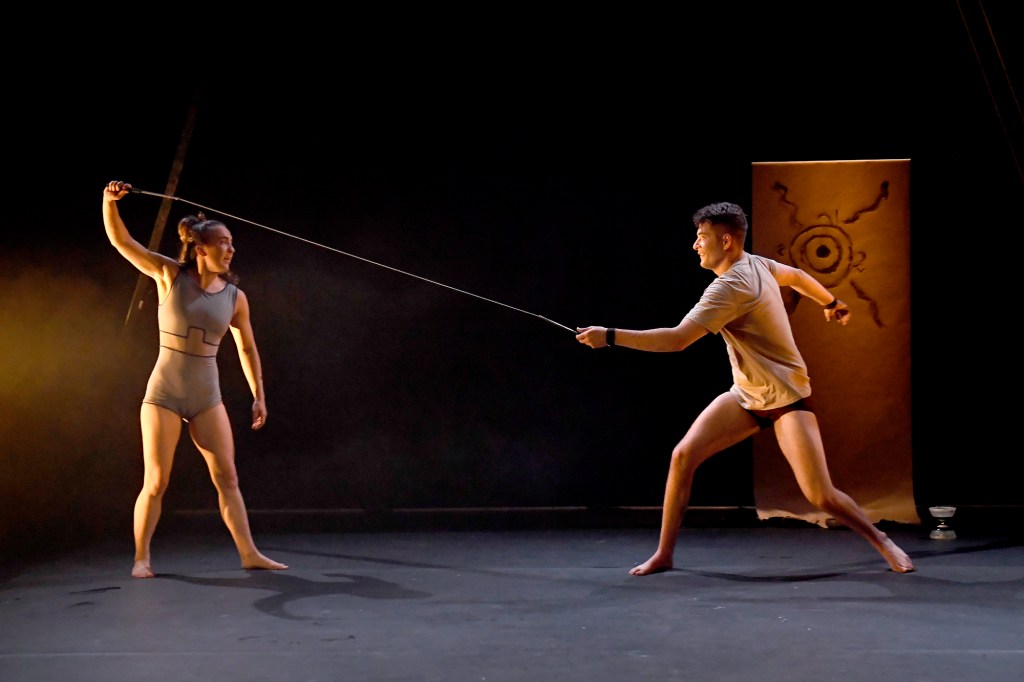 ‘With multifaceted layers showcasing shared and individual experiences, and an awareness of a collective place, Common Dissonance is another brilliant creation from the Na Djinang Circus.’ Photo by Brigitte Brand.

There’s a beauty in watching physical theatre in an intimate space that is inevitably lost in larger auditoriums. Na Djinang Circus’s mesmerising show, Common Dissonance, at Theatre Works allows the audience to witness fundamental elements that would otherwise go unnoticed – the primal sound of flesh on flesh, the laboured breathing of the athletic performers, and the often subtle yet hypnotic physical gestures, highlighted by perfectly restrained lighting design. It’s a superb show in the perfect location.

Common Dissonance reflects the richness and complexity of Indigenous people who are steeped in tradition but living in the contemporary world.

The sparse set – a pyramid-style steel frame atop a large black mat – fills the darkened space mere metres from the front row seats. The show opens with a sense of intrigue as the two main performers, Harley Mann and Isabelle Champagne-Chittick, tumble, dance and perform acrobatics that defy norms and display their elite skills and obvious trust in each other.

Normally a two-person performance, on the night we saw Common Dissonance the cast was managing injuries, so was ably supplemented by Dylan Singh, attesting to the edict ‘the show must go on’. While it didn’t suffer from this last-minute change, I suspect the original routine would have had a more cohesive storyline for audiences to follow.

In pared-back costumes, the cast employ multidisciplinary methods – including incredible rope work and diablo skills from Mann and formidable trapeze work by Champagne-Chittick – to convey a story of the two worlds that many Australians find themselves grappling with. It’s live contemporary art that unflinchingly takes its audience through the gamut of emotions. There are feelings of peace, tranquillity and harmony, then later a creeping sense of confusion, discomfort, tension, and anger as it explores notions of identity, a past that has been repeatedly ignored, the white-washing of Indigenous culture, and the grief of voices that have been silenced by the passage of time.

The soundscape is a prominent component of the work, filling every corner of the theatre and assisting the performers to contextualise the intricacies and inconsistencies of our modern-day lives.

With multifaceted layers showcasing shared and individual experiences, and an awareness of a collective place, Common Dissonance is another brilliant creation from the Na Djinang Circus, who play a critical role of telling one’s own story to the next generation.

Common Dissonance will be performed until 27 November 2021