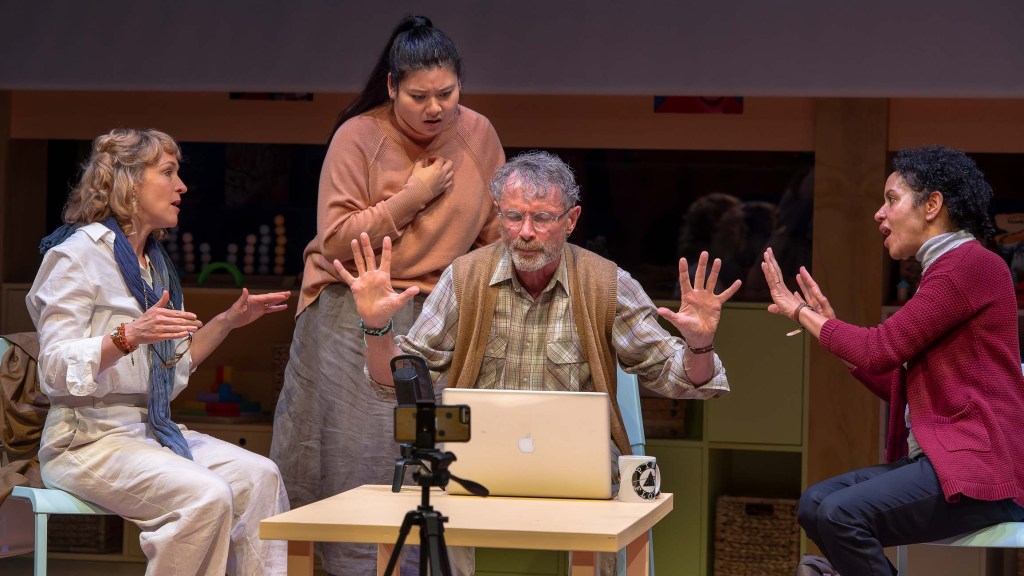 The State Theatre Company’s latest production is a comedic take on a timely issue: vaccination and the extent to which it should be mandated.

Eureka Day, written by Californian playwright Jonathan Spector and performed for the first time in 2018, was conceived long before anyone could imagine how pervasive and inescapable discussions of viral outbreaks, vaccination deadlines and quarantining would become in the wake of COVID-19. Spector’s play collected a number of local awards upon its premiere before going on receive further accolades in New York. As the current climate imbues it with added significance, its success shows no signs of slowing.

With all scenes set at the ultra-progressive Eureka Day School’s afterhours board meetings, the play follows the efforts of five painfully earnest board members to deal with an outbreak of mumps in their community. Accustomed to ending their (very long) meetings not with formal motions or decisive votes, but with back-patting, hand-on-heart joy upon finally reaching a general mood of consensus (any lingering discontent solved by some group breathing exercises, of course), the board’s policymaking tactics are put to the test when it becomes clear that this time no decision can comfortably accommodate everyone’s version of the truth.

It’s funny stuff. The scenes that provoked the biggest fits of laughter – often prolonged enough to drown out the dialogue – were the prescient depictions of now harrowingly familiar pandemic phenomena. In an especially memorable sequence towards the end of the first half, the well-meaning board members attempt to open up discussion of the mumps outbreak to the wider school community via video conference. The board does its fumbling best to mediate the conversation while the accompanying live chat, projected on screen in the background, descends from a running commentary of technical issues (I think you’re on mute!) into the kind of frenzied insult-trading you’d find in the comments section of any pandemic-related social media post.

Things take a more serious turn in the second half, when it becomes clear that this assortment of passionately held opinions exists as strongly within the school board as it does among the other parents. Stuck in their everlasting meetings, however, and with a decision needed urgently when tragedy raises the stakes, these five are forced to push beyond the language of online spats and evasive meeting-room rhetoric to get to the heart of their beliefs and reach moments of connection and understanding, if not agreement.

A strong cast brings these characters and their struggles to life. Glynn Nicholas’s comedic talents are on display in the role of Don, a believer in buzzwords and Rumi quotes who is desperate for everyone to just get along, while Sara Zwangobani and Caroline Craig offer moving performances as parents with opposing, but equally fervent, views about what it means to want the best for one’s children. Juanita Navas-Nguyen and Matt Hyde round out this impressive ensemble.

What makes Eureka Day a success is that, in the same way as these characters are pushed to finally listen to and learn from each other, the audience goes from laughing at their clumsy self-righteousness to sympathising with the real pain that lies beneath it and informs their choices. If we truly want to move towards understanding each other, this play suggests, we’ll have to commit to digging a little deeper, and let our laughter be a gateway to harder conversations.

Eureka Day will be performed until 27 November 2021