The return of Circa’s Carnival of the Animals offers continuing joy and delight, with an added and most enjoyable twist.
Suzannah Conway 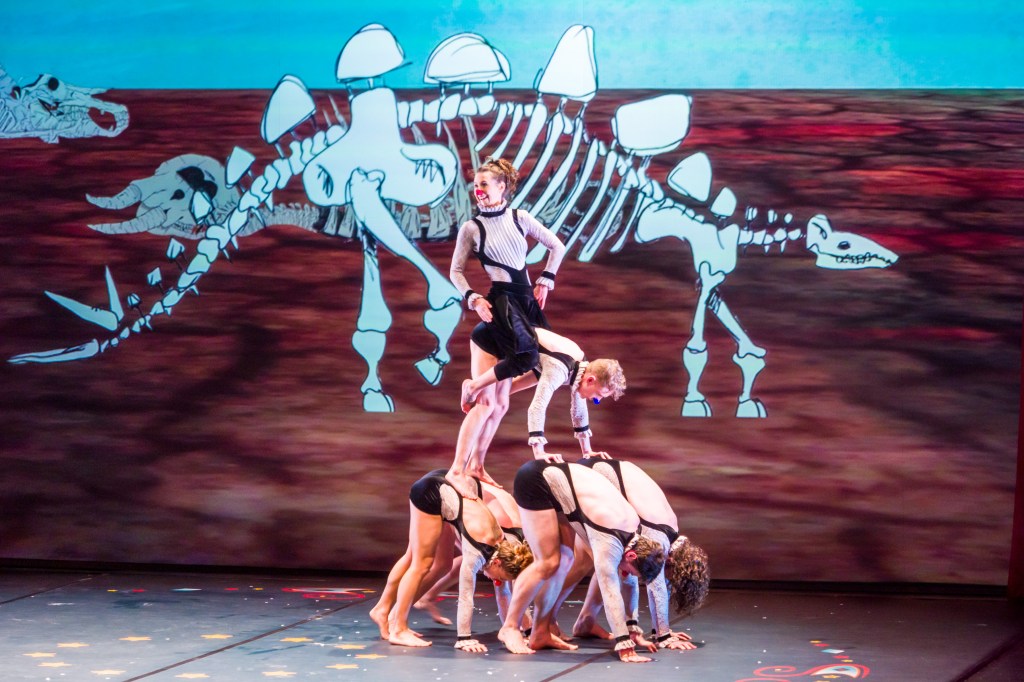 ‘ This is certainly a show for all the family to enjoy, and is of particular delight and wonder for the child in us all.’ Photo by Darren Thomas.

Established in Brisbane in 2004 (with its origins in an earlier company, Rock n’ Roll Circus), Circa Contemporary Circus is now recognised as one of the world’s leading performance companies. Astonishingly, in just under 20 years, Circa has grown from a modest and locally-based circus troupe to a company that regularly tours the globe, having performed in more than 40 countries and to over 1.5 million people.

The company, under the direction of its inaugural Artistic Director, Yaron Lifschitz, has been lauded as being at the forefront of a new wave of contemporary Australian circus. Its exhilarating commitment to displaying human physicality has created a number of powerful and moving theatre works that have helped blur the lines between movement, dance, theatre and circus, in turn finding new audiences among adults as well as children.

Carnival of the Animals is one of Circa’s major and most enduring works, inspired by and based upon the classical musical suite by Camille Saint-Saëns. The magical world of animals, birds and sea creatures that was created sonically by the French composer clearly has lent itself particularly well to a visual and physical recreation of the work through Circa’s exciting brand of circus. Created by Lifschitz as a collaboration with QPAC’s marvellous Out of the Box Festival, its world premiere took place in Brisbane in 2014, where it was an instant success. Since that time, Carnival of the Animals has been presented in 288 performances across 13 countries, and has also enjoyed three revival seasons at QPAC, always to great acclaim.

This current revived Brisbane season is particularly memorable due to a reimagining of the earlier production, with a new focus that includes a contemporary prologue and a final act, adding 10 minutes to the original show. As part of its philosophy, Circa is committed to fostering the next generation of performers and, in this newly-minted version, 16 young Queenslanders, currently being trained in circus skills, were offered the opportunity to perform on stage alongside the ensemble.

The addition of this glorious troupe of young performers was exhilarating to watch while offering a new level of engagement and much fun for the audience. Their level of skills, alongside a clearly joyous and fearless commitment to the stunts, somersaults and acrobatics that they performed, was indeed impressive and highly polished. Costumed in delightful black and white striped body suits, these young artists were brim-full of energy, displaying considerable cheeky humour towards their adult colleagues, often positioning themselves as equals on the stage and in their stunts, and provoking much laughter from the audience.

The main body of the performance by the core ensemble of seven highly talented and skilled artists was beautifully crafted, exceptionally well-delivered and often touchingly and lovingly presented. They were able to move deftly from being animals to performing their myriad bunch of tricks, acrobatics and physical movements – jumping, skipping, tumbling, somersaulting, climbing silk ropes, swinging on bars and off metal rings, juggling and creating towers of people – while weaving stories of both comic and sad humour. They were assisted by a beautifully designed mixture of individualised black and white costumes with red clown’s noses from costume designer, Libby McDonnell.

Saint-Saëns’ music in 14 short movements, cleverly enhanced and extended by composer Quincy Grant, allowed the performers to both enact and imitate a wide range of fauna from elephants to chickens, tortoises to zebras, cats to kangaroos, penguins, a swan and even dinosaur bones. Their distinctive animal features were well portrayed, illustrated and enhanced by circus stunts and all manner of physical tricks. The chickens even laid eggs that quickly turned into juggling balls, while the swan was entwined in long blue folds of a lake of silk, and blue plastic sharks interacted with an eager audience.

A simple set design, starting with a plain calico curtained backdrop that morphed into circus scenes, also projected wondrous video and animation scenes onto a huge back screen. Video designer Michaela French created some astonishing imagery that included both a globe of the world, marvellous sea creatures in an underwater world, plus both land, sky and city-scapes.

The crayon drawn elephant who then came to life on the screen was a magical touch and well appreciated. With images of marine and land animals, birds, insects and butterflies, French presented a mesmerising visual palette of iridescent colours that linked well with the score, while working alongside the artists’ physicality.

This was a polished and well-directed production by Yaron Lifschitz, while its mix of whimsical and light-hearted animal impersonations with an emphasis on physical acrobatics was underscored by a visual and musical feast of almost non-stop colour, sound and movement.

An imaginative production with witty interactive moments, such as the shower of red balloons, certainly kept the action flowing and the children’s attention firmly focused on the stage. Moreover, this updated version of the original Carnival of the Animals, with the addition of such splendid young artists, was a terrific concept that was as absorbing as it was entertaining. This is certainly a show for all the family to enjoy, and is of particular delight and wonder for the child in us all.

Carnival of the Animals
Created by Yaron Lifschitz with the Circa Ensemble
A production by Circa and QPAC’s Out of the Box Festival
Playhouse Theatre, QPAC, Brisbane