Between Nature and Sin: David Griggs

While the retinal ping of David Griggs' survey captures attention, it is the narrative of an expat artist working regionally that has the greater impact.
Gina Fairley
[This is archived content and may not display in the originally intended format.] 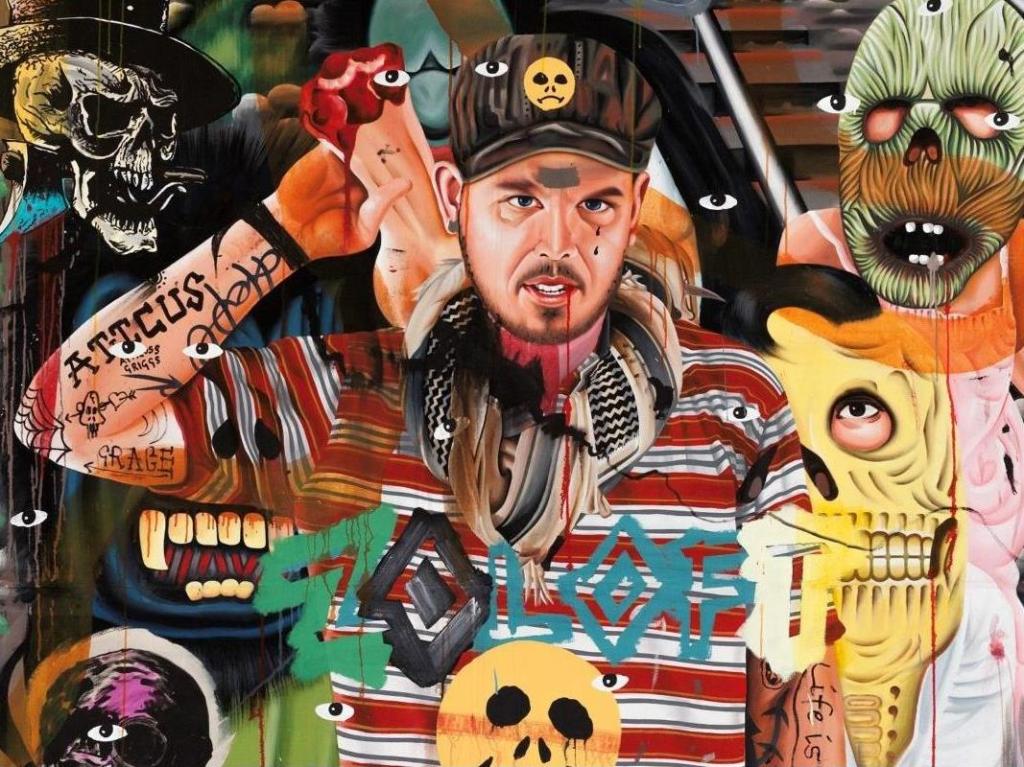 This is one of those exhibitions where you walk into the gallery space and are almost physically assaulted by its retinal ping, as colour seemingly pulses off the walls and images jostle with a “look at me” attitude.

The exhibition is David Griggs’ BETWEEN NATURE AND SIN at Campbelltown Art Centre (CAC), a survey that sketches out the ten year journey of Griggs’ movement between the sketchy back streets of Manila and the white cube, high art world of Australia. It is electric.

Curated by Megan Monte, the exhibition has not been presented in a logical chronological flow, but rather as rooms of confrontation and conversation.

On the long wall against a camouflage mural hangs the series Exchanging Culture for Flesh – the earliest of the works, made in 2005 and shown at the Art Gallery of NSW in 2006. While they are not Filipino in subject matter, their political tone and Griggs’ questioning of the mechanisms that drive our uncertain world are key.

Opposite are the self portrait Zoloft Nation (picture top) and portraits Clear, TV Moore, DHA and Hussey (2013-2016), which are closest to the style that Griggs works in today. To me they possess the psychedelic clarity of an acid trip.

In a new book on Griggs’ work, Rawlin continues: ‘David Griggs lives on prescribed psychotropic medication because his chemicals are not as balanced as he would like … Griggs’ living in Manila has made him acutely aware of his privileged white middle-class existence, and how it may, in turn, help keep his dark thoughts at bay, at least on canvas; because Griggs’ prescription affords him a drug experience that other classes could only hope to find elsewhere.’

Too much information? What is interesting here is the kind of ownership of a style – a movement, dare we ask? – that has an echo of grunge and skater culture but is as conceptually driven as the classiest echelons of contemporary art.

And if the hi-viz tone of Griggs’ work is not enough, all these paintings seemingly bleed into the walls, which have been painted by a visiting Filipino artist in collaboration with Griggs.

Facing a mural of an upside down sunset, the somewhat surreal scene is interrupted by two figures who are buried up to their necks in the jungle delivering line-after-line of slapstick comedy. Griggs’ first foray into film making, Where’s Francis (2007) is an amusing commentary on Francis Ford Coppola’s Apocalypse Now, which was filmed in the Philippines in the late 1970s.

What is real, mythologised or imagined is not blurry territory, but simply co-exists in the Philippines. Griggs has this innate ability to tap into and regurgitate that vernacular, yet is able to steer clear of appropriating it as the import expat artist.

One’s eye is caught and drawn in, like a kid to candy, to the larger gallery, where several of Griggs’ series are presented indiscriminately and cast against black and white checked carpet tiles. His large-scale portraits from The Bleeding Hearts Club series (first shown at Kaliman Gallery in 2006) are propped up on structures that reference the roadside billboard vernacular of the Philippines, reading as sculptural exclamation marks in the space.

I remember seeing these paintings in that early show, unsure what exactly to make of them. They were painted directly from a suite of photographs of people encountered on the streets of Manila, his Buko Police series. But with time they have become iconic works across Griggs’ oeuvre, and it was great to see them again in the broader context of a decade’s work.

It was during this series that Griggs started to collaborate with Filipino artists. The celebrated artist Manuel Ocampo painted The Bleeding Hearts Club #2 with Griggs. It is an easy jump then to the trajectory that followed – to his films; to the ARI he ran in Cubao, LOST space; to these wall murals here at Campbelltown. Arguably Griggs was not only painting Manila, he had become part of Manila.

Around the walls in that main gallery are the exoticised portraits of Griggs’ Zombie Kiss series (2009), which I managed to catch at Melbourne’s Uplands Gallery. While I have always felt it was not as strong as some of Griggs’ other series, conceptually it is tight. They raise the kind of ethnographic badging we like to do in the West, exploring how on a local level there is a kind of street ownership that contests that authority.

It was also a very interesting time in Griggs’ career and personally, juggling between a career stretched across oceans, maintaining visibility in Australia to push that career while running hard with LOST, and living ever-deeper immersed in the Manila art scene.

The adjacent gallery spaces are almost like potholes to get lost in. Cowboy Country – Griggs’ first feature length film – is a good 80-minute pothole that is a spoof on the kidnap industry in the Philippines. I have been to these tropic outposts; I have been escorted under guard for fear of kidnapping; and as Griggs’ film plays out there is a casualness to this contemporary narrative that is slightly backyard but extremely real.

For most Australians visiting the exhibition the film might largely be read as an artistic indulgence; what is little known here is the tradition of the epic film in the Philippines, in particular the iconic work of Lav Diaz. Griggs collaborated on the film with Soliman Cruz, the late Dante Perez and Melanie Tejano.

It was also an epic project for Griggs, started in 2013 and screened for the first time with this exhibition.

There is a smaller gallery painted black which presents a salon hang of photographs under the title of Magic is Mentally Ill (2014). It was the first work that Griggs produced for exhibition – effectively taking the ‘armature’ that has been the foundation of his work and showing it bare.

Completing the show, in the front gallery is a suite of photographs taken in Manila City Jail (2009) of gang tattoos paired with a painted cube structure titled New York London Paris Rome Manila City Jail (2009). Griggs’ residency at the jail was a real reality check, working with four gangs. In some ways this exhibition is very timely with the current “street warfare” playing out at the moment in the Philippines, and Australia’s growing acknowledgement of cultural gang activity.

They sit with the foyer work, a video projection titled, Blood on the Streets (2007). I have always enjoyed this work – for us itseems a little kitsch and ghoulish but it is quintessentially Manila. Kids with “horror” masks ride a redundant train line that slices through the city; either side are the shanty dwellings that grow like barnacles all over the city.  It is just so everyday.

As Monte describes, ‘Griggs takes the everyday and flips it to expose the cracks, exhuming the raw undercurrents of a society.’

I have followed Griggs’ work for more than that decade, and I should add the disclaimer that I have curated his work into several exhibitions when I was freelancing across Southeast Asia. One might argue that that gives you the perspective or insight and context, and perhaps my reading of this exhibition is then somewhat tainted with nostalgia that walking into BETWEEN NATURE AND SIN would not typically trigger.

What I do find interesting with this exhibition is its long overdue championing of an artist who is working regionally; who has bridged the vast chasm that seems to fall between an artist and the Australian art world when they decide to live and work elsewhere.

For that reason Campbelltown Art Centre need be championed for leading this conversation.

A major monograph of David Griggs’ work has been produced by the gallery.

The project is part of the Bayanihan Philippine Art Project.
Read: Does predictability make a good exhibition?

This project has been assisted by the Australian Government through the Australia Council for the Arts, its arts funding and advisory body.