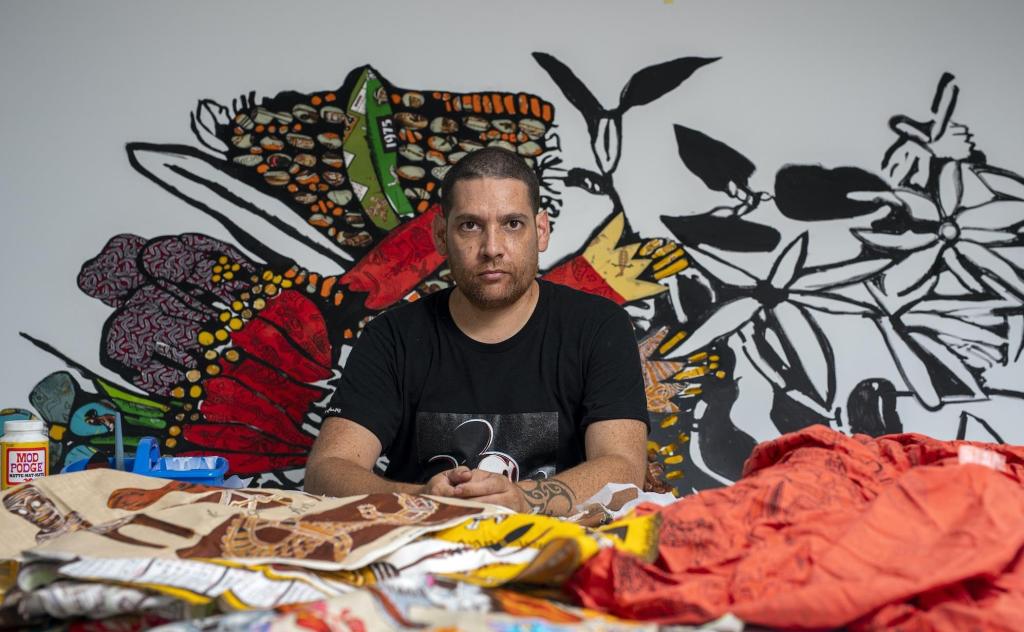 Forced to alter his studio practice during the pandemic, artist Tony Albert has used this past year to rummage through his archive of ‘Aboriginalia’ – a term he uses to describe kitsch objects that naively and stereotypically depict Aboriginal people and their culture.

Re-discovering his holdings of vintage fabric, Albert has made a suite of new collages that turn the tables on the early 20th century modernist, Margaret Preston (b.1875), in a new exhibition titled Conversations with Margaret Preston.

Preston was celebrated for her woodblock prints, which often used native flora and designs, but more interestingly, was considered progressive for her views on a national identity that incorporated Indigenous Australian iconography and palettes – one of the first non-Indigenous Australian artists to do so, and indeed opened the floodgates for decades of cultural pillaging to follow.

We caught up with Albert to have a chat about his thoughts on Preston’s vision for a national identity, and dip a toe into the murky waters of appropriation, and what that might mean today as we emerge from a year when Black Lives Matters came to the forefront.

ArtsHub: Do you think Margaret Preston’s idea for a national identity – which led to the adoption of Aboriginal-styled designs and motifs – was progressive or misguided?

Tony Albert: It’s [open-ended], and that is why it led to this idea of a conversation in this work, rather than a more critical approach. She is someone I would love to sit down with, and have a chat. It is not about pointing a finger at what she did, which was possibly good intentioned. However, it did open the floodgates to something that has had a much more detrimental impact as it entered the homewares and interior décor [sector].

The interesting thing that came out of this looking, is that we haven’t entered into a dialogue of the idea of a national visual identity [that Preston proposed], which I think is very interesting.

AH: Did she write about her theories for a national visual identity?

TA: She wrote for a number of publications, I think Art and Australia and home interior magazines; she certainly lived by those words. There was a real genuine belief in the framework for what she was saying.

AH: Do you think that conversation and her work was a trigger for what was to follow, that mass production of ‘Aboriginalia’?

TA: Indirectly, yes. When something is at that pinnacle it does have those filter-through effects, where you see reproductions of designs, and ends up with this export manufactured overseas.

With her work, there was an interesting nature of massing things together, with no thought of where this [design] came from. It was very much an Aboriginal vernacular from coast to centre. Even in the last twenty years, this [perception of sameness] has become a very relevant, newer discussion.

AH: Why look at Preston now, and have that conversation in your own work?

TA: Having the fabrics as part of the collection, and never bringing them into to my work [before], and then to literally be surrounded by everything this year going through it, I started to get really interested again in where the fabrics started, and went to.

For me, the last year gave me the opportunity to delve and to question.

AH: When Preston appropriated Aboriginal designs and motifs, it was well before the kind of schooled verve for appropriation that many of us went through art school, which gave it a theoretical justification. What have we learnt – or not learnt – since then in terms of ethical positioning?

TA:  There is a lot more pressure on people – there’s a very active voice now around that – I think the last decade has escalated those conversations around how we use material.

It is a bigger conversation than it ever has been, and the sophistication around it is greater than it ever was. I’m not sure if that means we are there yet – but it absolutely remains very relevant.

AH: Was there a moment – a turning point – when you think we said, “Hey, this is not ethical”?

TA: It has been slow cultural learning. All those things in art world we have back-pedalled on – like the [categorising] traditional and urban idea – which has now fallen into the vernacular of contemporary art; the way of speaking has really changed.

If I think back to proppaNOW * – it’s now 20-years on – our relevance is less as a collective making work and more in terms of academic theory. Today you couldn’t go through an artistic degree without these questions being asked in quite a significant way. But when I went to school there wasn’t even the Aboriginal flag flying anywhere. Today Welcome to Country is part of the daily life in school.

I am excited for our next generation – it will be really phenomenal because they have grown up with such an engagement with culture.

AH: As you say, your work has long had a political aspect. How do you see this new work sitting within that broader position?

TA: Look, it is going to be perceived much more political than it is meant to be. Sometimes the viewer is much more aggressive to the concept, rather than the other way around. I strongly believe there is a vernacular missing, and it serves us, and her, more if that can be dissected and spoken about. I always stand beside my work, and I’m happy to discuss it.

It is going to be perceived much more political than it is meant to be. Sometimes the viewer is much more aggressive to the concept, rather than the other way around.

They [Preston’s works] are heads and tails above just a vase of flowers, and whether looked at in great way – or not so great way – I think she had a sensitivity in the language she used.

AH: If you were to sit down with Margaret Preston tomorrow, what would you want to ask her?

TA: The idea of conversation so important to me – it is metaphorical.

At the forefront, I’d ask her about her idea of identity, particularly when people at the time were traveling to the UK and Europe and America. I think she got something, and understood its intricacies, and she did really want to engage.

I would [also] want to know more about the foundations of that engagement; to see how she engaged with community and any conversations she had – if any – and what frightened her, or what she was scared of those in those conversations, but still felt she could advance.

I was very careful coming into this; I didn’t want to shit on someone that obviously would not have been without her own pressures as a female artist in her time.

It is interesting how that is blurred now, for me it is conversation that we are all involved in – we need to be artists [and] we need to face these conversations.

Enjoy a behind the scenes look into Tony’ Albert’s studio, and the making of Conversations with Margaret Preston on this Vimeo.

* proppaNOW is Aboriginal urban art collective that was founded in 2003.