It can be awkward to ask for money you are worth but if you don't, there is a queue of event organisers ready to ask you to work just for 'exposure'.
Esther Anatolitis
[This is archived content and may not display in the originally intended format.] 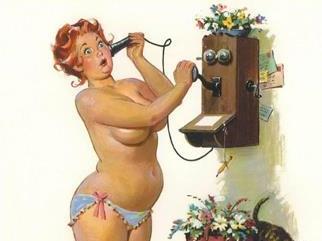 Hilda, the pin up creation of illustrator Duane Bryers Paul Chabas, shocked to receive yet another call to work for free.

Every now and again, a colleague gets in touch with a favour for me to present, facilitate or collaborate on something, and because we know one another’s work, they already know it’s something that will interest me enough to do gladly. Being clear that there is no budgeted fee and indeed no budget at all, they might offer to shout me dinner or bake me a pie, but I have no expectation of anything in return. We’re an active community of creative people who have long since made a commitment to doing everything we can to sustain that community. Our creative work tends not to return an income. And, like many salaried people, there are many such out-of-hours contributions that I make as an extension of my role as Director of Regional Arts Victoria, a full-time job that I work across four long days to leave Quiet Fridays for my own practice. This includes informal consultation, strategy brainstorming, programming critique, mentoring and being mentored, and just being a confidante.

Every now and again, somebody I hardly know, or indeed not at all, or beyond the scope of my work, or outside of the arts altogether, gets in touch and makes a wholly unreasonable request for a great deal of work, only causally and belatedly mentioning that there is no fee. I make a polite response that declines, makes it clear why the approach was unreasonable, and suggests what they might try instead. Knowing that many people are faced with such approaches, I always do my best to respond, because if I don’t make it clear why I have declined, they will likely continue to make such approaches.

I’ve had two such approaches recently: The first was from a teaching institution, asking me to deliver four hour-long sessions across a few months and offering ‘significant exposure’, for no fee.

The second asked me to facilitate a full-day seven-speaker non-arts event as part of a large multi-day conference that charges attendees several hundred dollars and attracts sponsorship, and also to mentor each of the speakers in preparing their presentations, for no fee.

What was wrong with the first approach? It assumed that exposure was worth more to me than a gesture of respect for the work that I would need to do to earn that exposure – for them. I’m not sure that their venues or caterers would have been happy to have their work recognised in exposure.

What was wrong with the second approach? Where to start.

Firstly, it fundamentally misunderstood the nature of the work requested. Facilitating a full-day event and mentoring seven speakers is something I’d put a part-time producer on, were I running the event. That’s focused work across a good few weeks of research, liaison and feedback.

Secondly, it assumed that I would have the same level of commitment to the event as the organisers themselves, a tireless yet small group who have made the self-flagellating error of investing so much of their own money without ever budgeting the work involved that they aren’t in a position to analyse and understand the nature of that work. (The previous point again.)

In the thousand-word email I received in response to my decline, the organiser was clearly very upset at my assumption that there was quite a bit of work involved in what they had asked me to do – upset because this seemed in their eyes to overlook all of the hard work in what they were doing. And yet there was absolutely no reason for them to assume that I would be as committed to the success of their event as they were; I was not a collaborator, a colleague nor a friend, and would therefore have no reason to volunteer my expertise across weeks of my time.

Thirdly, this approach imposed a great level of familiarity in having a perfect stranger email me to announce that “(unfortunately!)” there was no budget. I once received a request from a stranger that used emojis next to the assertion that there was no fee to be offered. Pro Tip: If you don’t know someone, and you’re trying to wink at them via email to secure their commitment, believe me when I tell you that this approach will fail – and moreover, that it will be remembered.

It can be really hard to let someone know that their approach has been inappropriate or offensive. It can be really awkward to ask for what you’re worth. From time to time I post paraphrases of such approaches on Facebook to share some language around responses, especially in groups characterised by writers’, artists’ and women’s equity. (“Headline: Artist dies of exposure!”, wrote Catherine Ryan in response to that first example.)  And yet we must respond, in every instance – because it’s the unseen critical mass of each such approach, and each response or lack thereof, that creates the culture of exploitation that we all know so well.

To counter that culture of exploitation or indeed self-exploitation, we need to be honest with ourselves, making a clear distinction between what we’re willing to contribute without payment, and what kind of work should not be accepted without a fee. And similarly for those making requests: give some serious thought to what you’re asking before you make your approach. The distinction is not a simple one. For me, it’s about creative exploration, intellectual engagement, community development, collegiality and advocacy, against the unpaid expertise that generates a commercial return for another.

I want to live in a world where artistic practice is valued. I am conscious that as a salaried person, I have a greater capacity to say ‘no’ than back when I was entirely freelance. I wouldn’t dream of asking for a fee for the outside-of-hours work I do in contributing to our community. I am always pleasantly taken aback when a conference covers costs and/or pays a fee; on the other hand, I am always astounded when conference organisers expect speakers to pay to register at a event where they are speaking for no fee. For ten years, Hélène Frichot and I co-curated Architecture+Philosophy on no budget. We sensed a desire for the kinds of intellectual stimulation that bridged the two disciplines, and we were able to bring people together who now collaborate in other ways. Our various partners over the years included Federation Square (who offered all the resources of The Edge plus technical staff), RMIT (who offered a lecture hall plus funds to cover speaker honorariums in the form of book vouchers), and Swensk (who offered a beautiful space as well as drinks, bless them, with thanks to one of their own partners).

I did not request a fee for this article, and nor was I offered one. I was going to blog it, but I hoped to reach a broader audience, and the occasional pieces I gladly write for A​rtsHub are part of our industry partnership. (Did you know you can get a discount on ​ArtsHub membership as a Regional Arts Victoria member? True story!)

Not a week goes by when many of us don’t meet, chat, consult, advise and learn from colleagues across the country and across the world. It is my choice what I offer and what I exchange of my labour. This ought to be a choice that everyone can feel equally empowered to exercise. 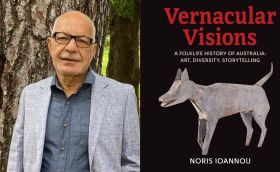 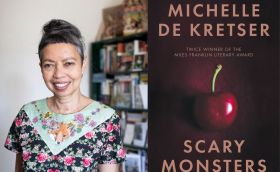 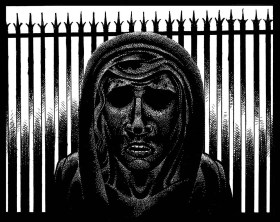 The flight of the diaspora is being captured by Australian artists.