Vale Frank Watters – a giant with a gentle smile

A coal town boy with an eye for art, Frank Watters left an amazing legacy on the landscape of Australian art, and will be remembered for his passion for a good conversation.
Gina Fairley 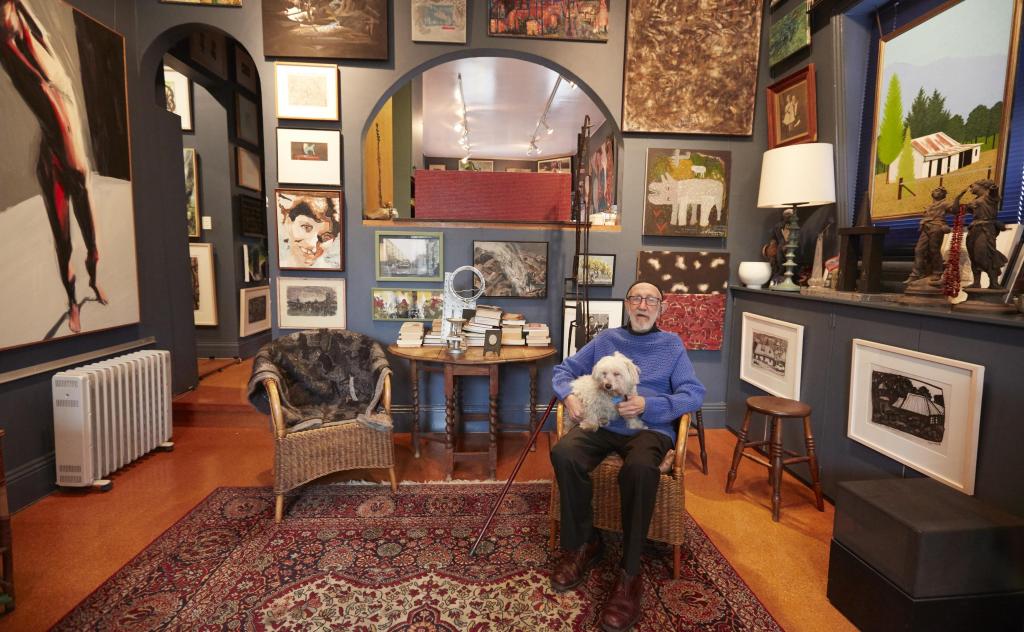 Tributes have rolled out on social media with the news that Sydney gallerist Frank Watters (1934-2020), who passed away over the weekend, aged 86. Watters died peacefully at home.

This death coincided with the launch of the exhibition this week, The Watters’ Gift at UTS Gallery (20 May-17 July 2020), a bequest comprising 67 works by 27 Australian artists to the university’s collection, cementing his legacy with due recognition.

It is the most significant gift in the university collection’s thirty-year history, and follows an equally substantial gift of 32 artworks to the Art Gallery of NSW in 2018, valued at more than $1million and gifted when the iconic Watters Gallery closed, where the gallerist had been a partner.

Watters also donated his rich archive to the Art Gallery of NSW Library, a kind of time capsule that traces the history of Australian art.

Never seen without a knitted beanie, glasses teetering on his nose above a greying beard, and his beloved dog Teddy never far from his side, Watters was known for his warm spirit for artists and always up for a good yarn.

He was co-founder and co-director of Watters Gallery for 54 years, alongside Geoffrey and Alexandra Legge – arguably one of the longest running commercial galleries in Australia. The gallery closed its doors permanently in December 2018.

Legge said at the time in a formal statement: ‘We’ve discovered that our energies have not really been great enough for the demands of the art world we find ourselves in. There are new challenges and possibilities which younger people can exploit with confidence and enjoyment.’

Read: Legends with a 50-year legacy

For anyone who was an enthusiast for the Sydney art world, Frank Watters was a stalwart who shaped not only the careers of many artists, but the very landscape of modern art in Australia.

Biographer of the Watters story John McPhee writes: ‘Some of the earliest Australian video, installation, and performance art was shown at Watters Gallery … Work considered outside the mainstream, overlooked, or too controversial was never a problem.’

A COAL TOWN BOY WITH AN EYE FOR ART

Frank Watters grew up in a working-class household in the Upper Hunter Valley town of Muswellbrook, eager to leave a coalmine career.

Watters left school at 15 and headed to Sydney, worked a bit in factories and embraced painting, before the then established dealer Barry Stern recognised his talent and gave him a job. It was the chance meeting of Stern’s neighbour Geoffrey Legge  that set the next 50+ years in play, opening a gallery first in Liverpool Street Darlinghurst, and later moving to Riley Street in 1969, when it was the heart of Sydney’s red light district.

A renovation of the gallery by architect Don Gazzard saw the conversion of a flat atop the gallery, which became home to Watters. It was like an Aladdin’s Cave of art – the walls heavy in a salon hang of paintings, opera usually in the background, and a small crowded roof top garden.

It oozed with Frank’s personality and his passion. Simply, art was Frank’s life, and he immersed himself in it completely. McPhee said of Watters: ‘He looked hard at art and was always rewarded.’

Franks’ Flat was first celebrated in an exhibition in 2011 at Maitland Regional Art Gallery (MRAG), during a later gallery renovation. It also marked the start of a winding down for Watters.

Writing for the exhibition’s catalogue, McPhee added of Watters gifts to UTS and AGNSW: ‘This ‘shedding’ is obviously painful, but Frank thinks of it as a natural process which offers others the opportunity to discover art which he has long enjoyed.’

Read: Why are so many commercial galleries closing?

While Watters was very much a fixture of the Sydney art world, country life was ingrained in him. He acquired land at Cassilis in the Hunter Region, and for years maintained an impressive rammed-earth house, where he would spend the summer when the gallery was closed, and entertained many visitors.

‘The combination of guests might have been considered surprising, but again they were chosen with care,’ added McPhee. It was like most things in his life – curated for curiosity and enjoyment.

In an earlier Artlink interview Watters explained (1994) of an art world changing around him: ‘The other thing I think about the scene is that there has become an absolute plethora of bureaucrats. These are people who are simply coming out of fine arts, hating art, and looking for whatever is fashionable. I think the big exhibitions we have seen are just so sterile and boring… You just feel as if one particular artist has done all of them. But having said all that, while enormously damaging, I think the scene is big enough for it not to matter. I feel as if we can tootle along in our own little world and it just isn’t a dreadful worry any more.’

Watters himself started as a painter, which perhaps gave him the empathy that defined his take as a gallerist. Predominantly a figurative painter with a lean towards expressionism, his first show was with Clune Galleries when it was in Macleay Street, Sydney.

But his career as an artist was short lived; he said he gave up after painting, He’s a Queer!, which hung in the flat’s bedroom. Painted at a time when there was little tolerance for a gay community, he told SMH: ‘It really frightened me, and there wasn’t a gallery like Watters back then [to mentor individual talents].’

Maybe another reason why Watters threw himself so passionately into making Watters Gallery much more than a showroom for selling art.

‘The thing I found really creative and interesting was the whole concept of working as an agent for artists,’ he told Artlink.

In September 2014, the Watters Gallery celebrated its 50th anniversary – a milestone for any relationship, let alone an art business. It was the stuff of legends.

SH Ervin Gallery marked the moment with the exhibition Five Decades at Watters Gallery, loaning works back from prominent public and private collection to pay tribute to its legacy.

SH Ervin Director, Jane Watters told ArtsHub at the time: ‘Art for Watters has never been about money, but about the artists and their work – that the Gallery did not even start making any money until after its first decade of existence reveals their passion for art.’

What defined Watters Gallery was its steady stable of artists; today representing a roll call of Australian modern art. They were adamant from the start that they would not “head-hunt” artists, rather choosing a more nurturing line acting as the artist’s agent, standing by them through their artistic decisions over the years.

Until it closed, the Watters website simply stated that it refused, ‘to follow art-world fashions and adhering to a policy of showing only those artists who are totally committed to their work.’

Watters said of the gallery: ‘One does not visit Watters Gallery for “chit chat”, but for conversations about the craft of art and the vision of the artist.’

Many will remember those chats. Frank Watters was a director who always had time for you. This was reflected in the many tributes this week on social media.

On closing the gallery, Watters was asked if he would miss the social circle? ‘No, I like life in the bush. I’ve had wonderful friends, but I like being alone.’

Watters spent his last years at his beloved Cassilis – country close to where he was born.

SH Ervin Director, Jane Watters concluded of Frank: ‘I think that the greatest legacy that Watters Gallery leave is the integrity of their support for living Australian artists over such a long period of time… (their) vision and commitment to their artists is unrivalled in Australia.’

Frank Watters was awarded an OAM for his services to the arts. He never stopped drawing at home.

Earlier this year (February 2020), Watters’ younger brother – Maxwell “Max”  Watters OAM – a painter also living in the Hunter Valley Region, and former Citizen of the Year, also passed away. He was 83. His beloved Teddy also died just a month ahead of Frank.