Why your brain wants you knitting

Albert Einstein, Julia Gillard, Eleanor Roosevelt and Christopher Walken all knitted. Maybe that's why they were more successful than you.
Emma Clark Gratton 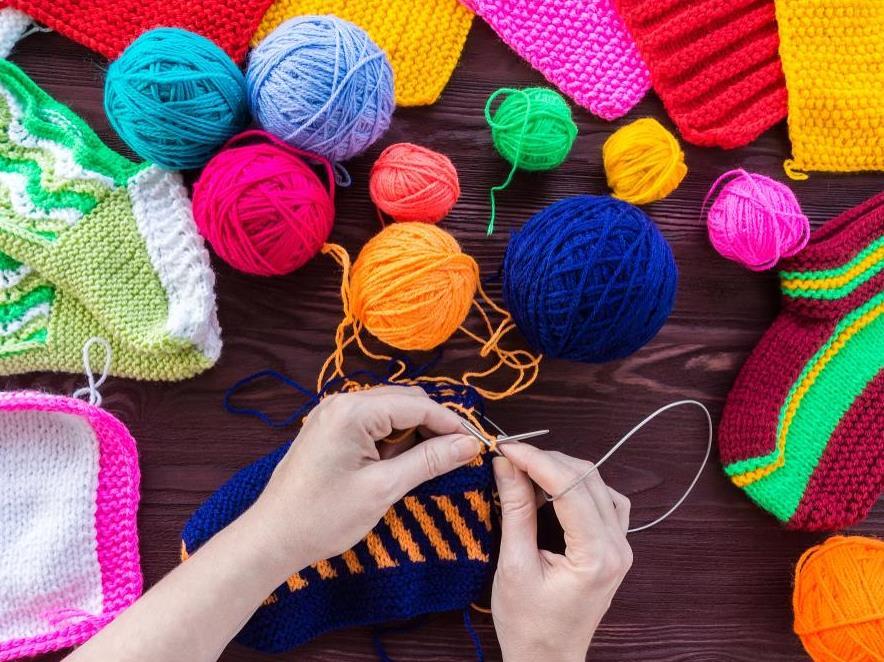 Scrolling through a smartphone has become the default gap-filling activity for many people. Stuck on a bus or in a waiting room? Let’s check Twitter for the eighth time this morning.

But having something to do with your hands that doesn’t involve an iDevice can be much better for your brain. Freeing yourself from constant sensory input, and allowing your mind to wander enables space for creativity. The rhythmic and repetitive nature of knitting, crocheting or other handcrafts is calming, comforting and contemplative.

‘There’s promising evidence coming out to support what a lot of crafters have known anecdotally for quite some time,’ says Catherine Carey Levisay, a clinical neuropsychologist. ‘And that’s that creating — whether it be through art, music, cooking, quilting, sewing, drawing, photography, cake decorating — is beneficial to us in a number of important ways.’

Knitting is proven to have mental health benefits similar to meditation and mindfulness. A study on sufferers of anorexia nervosa found that performing a visual-spatial task such as knitting helped reduce distressing self-talk and improve patient outcomes. An impressive 74% of people reported that knitting lessened their fears and kept them from ruminating about their eating disorders; and 53% said it provided satisfaction and a sense of accomplishment.

The same chemicals that are released during sex and eating are also released when we are scrapbooking or decorating a cake. The reward centre in your brain releases a neurotransmitter called dopamine when you do something pleasurable. Scientists believe dopamine was originally designed to make us repeat activities that would help the species survive, such as eating and having sex. ‘Dopamine, in and of itself, is our natural anti-depressant,’ Levisay said. ‘Any time we can find a nonmedicinal way to stimulate that reward centre … the better off we’re going to be.’

And crafting’s reward goes far beyond the actual process. Seeing the finished product adorning your walls — or receiving praise from a loved one — can offer repeated hits of that feel-good chemical.

Focussing attention is key, finds Helen Zigmond, a director of The Institute for Creative Health since 2009. ‘Sustained focussed attention reduces the stress hormone cortisol and helps release endorphins and dopamine. Several neuroimmunologists have said that the state of focussed attention found in activities such as yoga, meditation and craft allow you to zoom in and concentrate, which then gives you a sense of wellbeing.’

Read: How the Australian craft industry can flourish

Humans have a need to create, said Liane Rossler, creative consultant and designer. ‘Speaking broadly, in the last 20 years, as manufacturing has changed, so has the way we make things. In the past, if people wanted something unique then they would make it themselves. Now, everything is available all the time. But we are still looking for ways to make things.’

‘Human beings have a real need to create, like hunger and thirst. This is shown through the 700% increase in craft workshops lately,’ said Rossler.

Continuing a skill that has remained basically unchanged for generations offers a connection to the past. While a grandmother might knit booties for her grandbabies, her grandkids might grow up and take up craftivism or yarn bombing, or contribute to the Crochet Coral Reef, a huge installation drawing attention to environmental issues. Passing on these traditional talents leads to multi-generational skill sharing, and encourages a sense of connection with the past.

Read: How to make a living through teaching your craft

Designers and fashion houses have caught on to the benefits of encouraging social connection through craft. A Dutch fashion designer has commissioned a group of elderly women to knit products for her knitwear range. Designer Annemarije van Harten said the return of knitwear to the catwalk gave her the idea to team up modern designs and traditional techniques, fashion designers with knitting grannies, in a project that combines social inclusion with a commercial spirit. The women are all in a retirement home, and meet each week to go over new patterns, collect their yarn and chat about knitting.

‘I learned to knit at school and it’s really fun to do, it’s relaxing, but it’s really sad when no one wears or uses what you knit,’ said knitter Loes Wijnbergen, who, at 58, is the youngest of the group. ‘It’s really worthwhile when someone buys and especially wears what we’ve made with our own hands.’

In an online survey of more 3,545 knitters, by Betsan Corkhill, a UK-based knitting therapist who has done research on the therapeutic effects of knitting, more than half of respondents reported that knitting left them feeling “very happy.” And many said that they knitted solely for the purposes of relaxation, stress relief and creativity.

The study found a significant relationship between the frequency of knitting and respondents’ perceived mood and feelings. Frequent knitters (those who knitted more than 3 times a week) were calmer, happier, less sad, less anxious, and more confident.

Corkhill’s study concluded, ‘Knitting has significant psychological and social benefits, which can contribute to well-being and quality of life.’

Interestingly, the study also found that people who knitted as part of a group were even happier than solo knitters. Knit-ins, stitch ‘n bitch groups, and even scrapbooking parties have many keys of mind and brain health covered.

Research has found that craft activities can decrease the cognitive impairment associated with aging, as well as strengthen neural pathways in the young. Among people aged 70 to 89, studies showed that the knitters and crocheters had the healthiest brains and memories.

Some progressive education systems are even encouraging children to learn to knit before they learn the alphabet. At schools which follow the Steiner (also called Waldorf) philosophy, students as young as four learn to knit to encourage the combination of the left and right hemispheres of the brain. By their third year of school, they switch to crochet, a craft that complements what they’re learning in math and reading. Handcrafts help kids perfect fine motor skills, works both sides of the brain, and prepares children to be better readers when they are ready for that step.